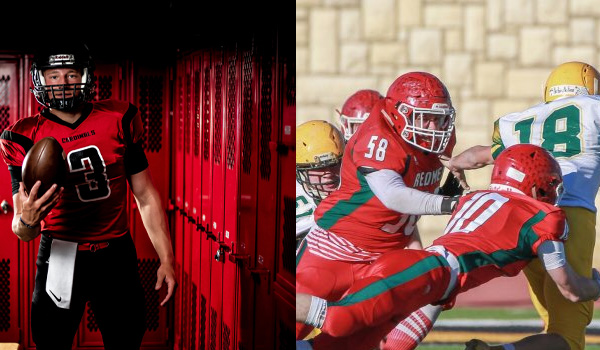 2018 Sports in Kansas 1A Offensive Player of the Year

The 6-foot-1, 220-pound Davenport was a multi-year starter at quarterback and linebacker for the 7-3 Cardinals. After a big junior season, he passed for 1,601 yards with 64.2 completion rate. He threw for 13 scores against four interceptions. He rushed for 700 more yards and 15 scores. Davenport didn’t play two games on defense but still finished with 81 tackles, five tackles for loss and two sacks.

Davenport, also third place in wrestling and fifth at discus last year, has multiple football scholarship offers at both quarterback and linebacker. He has received offers from Division I Drake, Concordia (Neb.), Washburn and Missouri Southern. He also has a PWO offer from Kansas State. Ell-Saline’s three losses came by two, seven and three points. Davenport was the best two-way player in the classification for 2018.

Congrats Nick Davenport on being named Player of the Year! We are so proud of you- love Grandma and Papa! Ludes Plumbing is proud to support Ell-Saline football!

Congrats to El-Saline HS QB Nick Davenport for being named 1A Offensive Player of the Year from Sports in Kansas! The Cardinal Touchdown Club is a proud supporter of Ell-Saline Football!

2018 Sports in Kansas 1A Defensive Player of the Year

Smith Center captured the Class 2-1A crown in 2017 and then won 1A with virtually the same teams in the classification this year.

Austin Hobelmann started on all three teams and anchored both lines this year. Logan Zabel backed up first team all-state linebacker Avery Hawkins before he took over at linebacker this year.

Zabel tallied the second-most tackles in a single season in SC history, according to mclkansashighschool.com. Kerby Rice delivered 160 stops in 2005.

The 6-1, 240-pound Hobelmann finished with 119 tackles, nine TFLs, six sacks, six quarterback hurries, three passes defended. On offense, he recorded 14 pancake blocks as the Redmen averaged 331 rushing yards a game. He earned first team all-Mid-Continent League on both sides of the ball and was unanimous on defense. He has four verbal football offers.

In the state game, Hobelmann had one of the most dominant defensive sequences SC coach Darren Sasse had ever seen. He tipped a pass, recorded a sack and then had an interception as Smith Center rolled Olpe, 59-0.

Congratulations! From the Hobelmann Families!

Congratulations to Austin and Logan for being named 2018 class 1A co-defensive players of the year. Simmons-Rentshler Mortuary are proud supporters of the Smith Center Redmen.

Congratulations to Smith Center HS Middle Linebacker, Logan Zabel on being named the 2018 1A Co-Defensive Player of the Year from Sports in Kansas, from Parkview Care Center of Osborne, Kansas.

Blooms Floral/Embellishments Boituque in Smith Center would like to congratulate Logan Zabel and Austin Hobelmann on 1A Sports in Kansas Defensive Player of the Year honors! Proud to support Smith Center athletics!

LandMark Implement would like to congratulate the Redmen on another outstanding season. Congrats to all of the players on their honors and success!

Dietz and Hardman Law Offices in Osborne and Smith Center would like to congratulate Logan Zabel on 1A Defensive Player of the Year from Sports in Kansas. Congrats on back-to-back state titles!

Sports in Kansas 1A Offensive Player of the Year Finalists

Sports in Kansas 1A Defensive Player of the Year Finalists