v White & Downing pick up 4A Sports in Kansas POY honors - Sports in Kansas 
Warning: include(../includes/bodytag.php): failed to open stream: No such file or directory in /home/kansass/public_html/ks/news/index.php on line 36

White & Downing pick up 4A Sports in Kansas POY honors 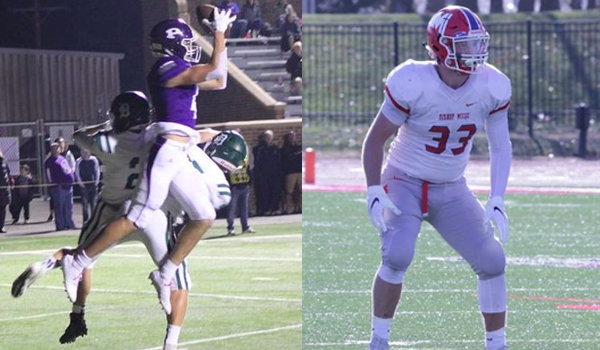 2018 Sports in Kansas 4A Offensive Player of the Year

White, in his second year as a starter, led Pittsburg to an 8-2 record and No. 2 final ranking in Class 4A behind Bishop Miege. After a first team all-state junior season at receiver, White upped his production this fall with 33 catches for 857 yards and 14 scores. Overall, he recorded 18 touchdowns.

He has 4.43 speed and has significant FCS/Division II interest with offers from Pittsburg State, Washburn, Southeast Missouri, and Western outhern Illinois. The 6-1.5, 180-pounder also picked off five passes with 180 return yards, two were for pick sixes. He also shined the most in a win over 6A runner-up BV North and a loss against 4A five-time champ Miege. White was also all-state in baseball last spring. The Dragons averaged 33.4 points a contest and permitted 21.4. White is one of the most complete players in the state in all three phases and likely the fastest player in pads in 2018.

Congrats to Dylan White on the 4A Player of the Year from Sports in Kansas for the 2018 season. All Seasons Carpet is proud to support Purple Dragon Football.

Congrats to Pittsburg HS Wide Receiver Dylan White on being named the 2018 4A Offensive Player of the Year by Sports in Kansas. We are proud of you! – The Pittsburg Quarterback Club

Congrats to Dylan White on an outstanding football career and Sports in Kansas 4A Offensive Player of the Year. We are so proud of you! – All of your family!

2018 Sports in Kansas 4A Defensive Player of the Year

The 6-2, 229-pound Downing helped Miege overcome two rare losses and roll through the 4A playoffs for its fifth straight state championship. Downing is Top 11 for all classes for the second straight season. He finished with 131 tackles with 13 TFLs and three sacks. He finished his career with 403 career tackles. He is also one of the top punters in the state of Knasas. In the five title years, Miege has allowed 12.8, 16.1, 11.0, 11.2 and 15.9 points per contest. The Stags have lost just four games in five years. Dylan’s older brother plays for Missouri football.

Sports in Kansas 4A Offensive Player of the Year Finalists

Sports in Kansas 4A Defensive Player of the Year Finalists