v Faces in KS: Conner Havlas - Sports in Kansas 
Warning: include(../includes/bodytag.php): failed to open stream: No such file or directory in /home/kansass/public_html/ks/news/index.php on line 36

Conner Havlas averaged over 25 points per game as a junior last winter. 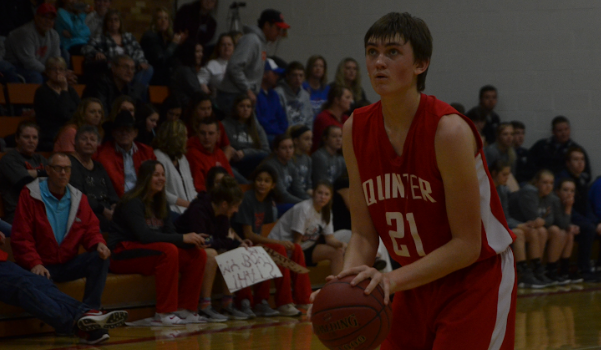 Quinter has enjoyed a long tradition of basketball excellence. Coach John Crist was a record-setting player for the Bulldogs and has served as head coach at his alma mater for the last quarter century.

In the last decade, Quinter has had varying degrees of success. In ’08-09, the Bulldogs finished second. The next winter, Quinter was ranked first virtually all year after it won state football and eventually finished fourth at state.

Last winter, Quinter went 7-16, its lowest win total. Regardless of the record, the Bulldogs have enjoyed superlative individual performers.

From a statistical standpoint, no one has achieved the success that 6-foot-5, 200-pound senior forward Conner Havlas has enjoyed.

This winter, the Bulldogs return 82 percent of its scoring, and Quinter could post its best record since 2010-11.

“He always gets us ready for what we need to do,” Havlas said of coach Crist. “Every day he pushes us in practice so we can reach our full potential. We are learning new things everyday. He’s a great well-known coach in western Kansas.”

In the last decade, five Quinter players – Matt Bird, Joe Simon, Brian Ochs, Brett Crist and Havlas - have at least at least one year where they averaged at least 16 points a contest.

Last year, Havlas averaged 25.5 points and 13.9 rebounds, both the best for Quinter in the last decade. On Feb. 15, in a 63-42 win versus Oberlin-Decatur Community, Havlas pulled down 27 rebounds, a school mark.

In a 68-47 win against Deerfield on Feb. 26, Havlas delivered a school record 45 points. He also set the school single season mark with 305 rebounds. He earned Sports in Kansas first team all-state for Class 1A, Division II.

“I like to always out work my opponent no matter what and always out hustle them,” Havlas said.

Havlas, who averaged 14.3 points and 7.9 rebounds a game as a sophomore, enters this year with 917 points and 514 career rebounds.

A three-year starter, he is the son of girls’ coach Matt Havlas and the younger brother of Peyton Havlas. He can bench 180 pounds, squat 250 and clean 225.

“My role model would have to be my dad,” Havlas said. “He has taught me how to work hard and never give up.”

They combined for 5.5 points as freshmen. Quinter started 0-5 but finished 7-11.

The Bulldogs went 2-9 in games decided by nine points or fewer, including 1-3 in games within four points. Quinter lost 49-47 to Otis-Bison in the sub-state title game.

“Our team has a really good chance to play with a lot of good teams out here and hopefully come out of sub-state and make a run at state,” Havlas said.

I got involved in basketball through my mom and dad. My mom was the recreation director so almost every weekend I was at the gym either playing or shooting around.

My goal this season is to make it out of sub-state and do some damage at the state tournament.

Our team has a really good chance to play with a lot of good teams out here and hopefully come out of sub-state and make a run at state.

I like to always out work my opponent no matter what and always out hustle them.

The atmosphere in Quinter has always been great. Every game the community comes out and fills up the stands, including the student section. There is always a lot of energy flowing and that is why Quinter is a fun gym to come play in.

Because I love to play the game and hopefully you could see how much dedication I put into the game of basketball.

Strengths: scoring, rebounding, basketball IQ and much more my weaknesses are scoring outside 3 point line

I play football.  I'm Tight End and Defensive End, and I also participate in track, as I high jump and run the 4x800m relay

He always gets us ready for what we need to do. Every day he pushes us in practice so we can reach our full potential. We are learning new things everyday. He’s a great well-known coach in western Kansas.

This summer the team got together and had a camp and a few practices also are freshman went and played in a few tournaments. Personally I played on WKE elite this summer and it was a great learning experience and got to compete with some really talented players.

I would love to get the opportunity to play at the next level. It would be a great experience to do and I hope I could.

My favorite thing to do when I am not playing sports would be spending time with my friends and family.

I see myself graduating college and getting a successful job.

My favorite subject is government. I’m a hardworking student that works hard for my grades.  3.27

My role model would have to be my dad. He has taught me how to work hard and never give up.

The best place we have in are small town would be the family run Dairy Queen.