v Faces in KS: Greysen Gardiner - Sports in Kansas 
Warning: include(../includes/bodytag.php): failed to open stream: No such file or directory in /home/kansass/public_html/ks/news/index.php on line 36

Greysen Gardiner is looking for a big year for Ashland. (photo: Everett Royer) 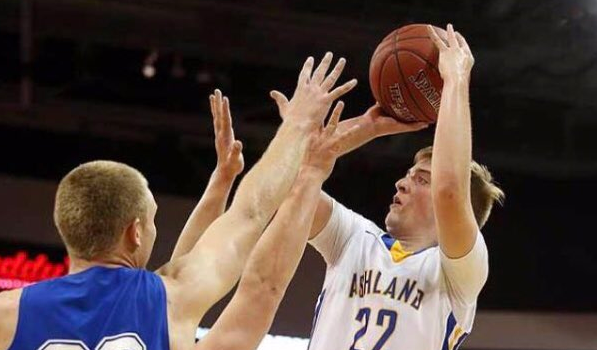 Entering this fall, Ashland has posted nine straight winning seasons with a total record of 152-57, the best success in program history.

The Bluejays captured an undefeated Class 1A, Division I state title in 2011-12 and reached the state tournament in 2015 and ’17. Two years ago, Ashland fell to eventual champion Wallace County-Sharon Springs in the first round of state.

Ashland’s link in the last nine winters has consistently been excellent individual players, generally between 6-foot-2 and 6-4 in height.

Before 2012, Ashland had not made state since ’02. Overall, Ashland has seven trips to the state tournament. 2002 and ’12 are the school’s only final four showings.

Giles Fox, also a highly accomplished football/baseball player and Ashland’s current assistant football coach, finished his career with 846 points and was a key player on the state team.

Then, Grant Meininger and Kole Konrade took over in leading roles. Meininger tallied 19.4 points as a senior and scored 974 total points. Konrade averaged at least 9.8 points per game all four years and tallied 958 career two points.

Last year, Reimer transferred to Nebraska, but Cole Lohrding came in from nearby Coldwater-South Central. He led the Bluejays with 14.1 points a contest, and White averaged 10.4 points and 7.2 rebounds.

“Cody Lohrding is kinda like my right hand man,” Gardiner said. “He runs our offense, and he does not get the credit he deserves. Our bigs Chris White and Konnor Maule do a lot of the dirty work and the help out a lot on the boards and inside. We have some underclassmen that have really gotten better over the summer and are going to be huge for our team.”

Gardiner, with his dad, Garth, as head coach, delivered 14 points and six rebounds for a 13-9 squad.

Garth, his wife Amanda, and his two brothers run a successful quarter horse business in Ashland. Four generations of the Gardiner family have led the Gardiner Angus Ranch.

The ranch was established in 1885. Garth’s father, Henry, was a pioneer in the cattle industry, according to gardinerquarterhorses.com. Garth has coached Ashland junior high and high school teams.

“It is a blast to play for him,” Gardiner said. “He is a great coach that knows the game inside and out. He would do anything for anyone on our team. He puts the team before him and that is what makes him so good to play for.”

Gardiner and Lohrding lead an Ashland squad that returns more than 60 percent of its scoring. The 6-2, 185-pound Gardiner was a first team all-state Class 1A selection from Sports in Kansas. This year, 1A underwent a massive change with the move back from 1A-I and 1A-II to one class.

Class 1A now has 118 teams with just eight qualifying for state. Ashland had just 60 students at the last KSHSAA student check and is in the bottom half of the classification in enrollment. It marks the first time 1A is just one class since 2010.

“I think we should embrace an underdog role,” Gardiner said. “We should surprise a lot of people, and I hope we can get back to Dodge City.”

I have played basketball for as long as I can remember

I want to have a better record this year and embrace the leader role on our team. I also want to be a better defender.

I think we should embrace an underdog role. We should surprise a lot of people and I hope we can get back to Dodge City.

The ability to take the ball inside and make a move but also go outside and hit outside shots.

Our school has been really supportive of our basketball team. They do a lot for us. It is really cool to have everyone from your town come out to your games and show us the support that they do. It makes us as players want to be successful even more for them.

My strengths are 3 point shooting and basketball IQ. My footspeed needs a lot of work and I can be more vocal on the court.

Cody Lohrding is kinda like my right hand man. He runs our offense and he does not get the credit he deserves. Our bigs Chris White and Konnor Maule do a lot of the dirty work and the help out a lot on the boards and inside. We have some underclassmen that have really gotten better over the summer and are going to be huge for our team.

My favorite thing about basketball is that it can bring so many different people together. You meet so many people through it and you also give your a community a thing to come to on a cold Friday night.

I play football and do track. Football this year has been awesome. We have great coaches and they are teaching us a lot both on and off the field. We are currently 7-0 and it has been a blast. I have done track every year but last year I had surgery on my foot for turf toe so I could not compete

My coach happens to be my dad and it is a blast to play for him. He is a great coach that knows the game inside and out. He would do anything for anyone on our team. He puts the team before him and that is what makes him so good to play for.

Our team competed in a summer league in Dodge City and I think that everyone gained a lot from it. We got to play with a lot of good teams and our younger guys got a lot of playing time. I was still coming back from having surgery on my foot so I was not able to play in that league for the most part. When I was finally healthy I played for a traveling team with a bunch of kids from around our league and that was definitely helpful getting that opportunity.

I have not received any interest yet and if the opportunity came I would definitely consider playing at the next level. I plan on going to a 4 year school and getting a degree in Sports Management.

I like to hang out with my friends and family in my free time.

I see myself hopefully working for an NBA franchise.

My favorite subject is English. I try to be a hardworking and respectful student. I have a 3.5 GPA

My role model is my dad.

The best place to eat in my town is the Red Hills Grill.

The average person probably wouldn’t know that I can sing. If I sing around you then you are really close with me.