Riley Sides is back after leading Northern Valley to a 1A-I title in 2018. (photo: Fig Milan) 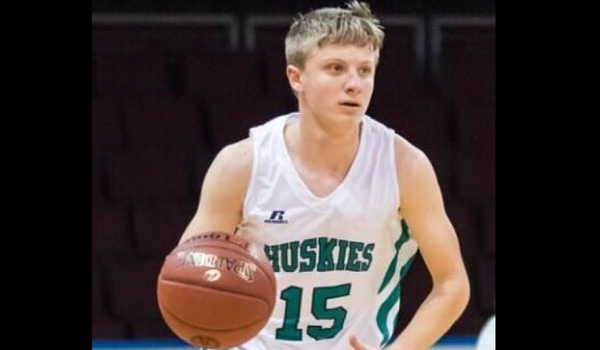 Almena-Northern Valley senior guard Riley Sides had his first basketball goal when he was three years old. His dad, Kevin, has long served as his son’s rebounder. The Sides’ family lives a block and a half from the high school, a place where Kevin and his twin brother Keith starred in the late ‘80s and ‘90s.

Even when his son was young, Kevin prepared his son for the higher ranks. Kevin used to throw Riley quick passes for shots. Riley told his dad to “quit throwing so hard.”

“Well, you have got to learn how to catch those hard passes,” Kevin replied.

The passes helped Riley learn to catch-and-shoot at a fast rate. Kevin taught Riley how to perfect his shot.

“Helped me bring the ball up as I got stronger and shoot from a higher position,” Riley said.

The work has produced one of the state’s top 3-point shooters, and like his father and uncle, a state championship basketball team for the Huskies.

NV, just south of the Nebraska border, captured crowns in ’90 and ’91 with then-coach Doug Reusink and then-coach Chuck Fessenden.

Last year, with Fessenden - who has spent more than 40 years with Northern Valley with football, boys’ basketball and track - as the head boys’ coach, the Huskies rolled to the Class 1A, Division II crown.

Riley collected classification Player of the Year honors from Sports in Kansas. Northern Valley finished 25-1, won the first boys’ title since ’91 and had an average margin of victory of 69-41. NV captured each state game by double figures.

The Huskies opened state with a 63-22 victory against Waverly, and then defeated Kiowa-South Barber, 53-43, before a 63-52 win versus McPherson-Elyria Christian in the final.

Northern Valley, with just one senior, shot 39 percent from beyond the arc. Sides averaged 17.4 points, 5.4 rebounds and 4.7 steals a contest.

“I have come to realize that shooting came naturally for me,” Riley said. “But my dad was a pretty good shooter in his day, so I think that passed down, but his help, and my knack for perfecting my shot, just a lot of repetitions to get to where I am now. Even when I was younger, I was outside shooting, getting ready. I always wanted to bring home state championships like my dad did watching his films when I was younger.”

He has no offers but has received interest from NAIA and junior colleges. In class, Sides has a GPA just below a 4.0. He enjoys math, especially the challenges that come from college algebra.

“It’s a challenge, and it’s one that I look forward to,” he said. “Because I haven’t always been challenged in school, and just the competitor in me just wants to overcome those challenges.”

His oldest son, Trey, earned Sports in Kansas Class 3A Player of the Year honors. Phillipsburg vied for its first boys’ basketball title, but lost to Halstead in the final seconds in the final. The Panthers reached state for the first time since 1973.

After Northern Valley celebrated the championship, the Huskies started to line up for pictures. The first thing Riley asked his mother was whether Trey and Phillipsburg won. His mother said no.

Trey and Riley are each the oldest children in their family. The two have played together in the summer for years.

“Always been more like brothers than cousins,” Riley said.

Trey’s younger brother, Ty, a current sophomore and talented player, normally joined them. The Sides’ often participated in a league in Kearney, Neb., 80 miles from Phillipsburg.

“He’s always catch-and-shoot ready, come off screens,” Trey said of Riley. “He has got his hands ready, his feet set, and he’s just put in countless hours in the gym, just getting up shots, and that’s really helped.”

Keith and his wife Robin, a former volleyball player at Hutchinson Community College and also a longtime Phillipsburg coach, have Trey, Ty and Taryn, an eighth-grade girl.

Kevin and his wife, Joy, have Riley, ninth-grade boy Bailey and Delaney, a sixth-grade girl.

Dale and Shirley are the parents. Kevin and Joy run the family farm, located 12 miles south of Almena. Dale is 79 years old and still helps Kevin as much as possible. Kevin is a first-year assistant for Fessenden this winter. Reusink has served as the coach at nearby Norton for more than 20 years.

Riley loves helping his dad on the farm and plans to farm the family homestead for his career.

“Can’t think of anything that I would rather do than come back and help my dad farm,” he said.

Additionally, the twin brothers have two older sisters. Kyle is a teacher/coach/official in Buhler, and Rhonda is a teacher in Clearwater.

As a freshman, Riley averaged 12.5 points, though shot 28 percent on 3s. As a sophomore, Riley, currently 6-foot-1 and 155 pounds, grew three to four inches, gained around 10 to 15 pounds and had more confidence.

He also stopped playing football after lingering effects from a concussion suffered as a junior varsity quarterback in a game freshman year versus Hoxie.

“A year under your belt,” he said. “When you are a little freshmen out there starting in varsity, and running the team in point guard, it takes a lot to get used to.”

However, NV suffered a sub-state upset loss to Wheatland-Grinnell, a team it had beaten twice earlier in the year. The defeat served as motivation and led to another big year from NV and Sides last winter.

“It’s something we talked about growing up our whole lives,” Riley said. “We started young, had a good group, and when we got to high school, we are going to make the most of it, and bring another title back to the Valley.”

This season, Class 1A has again return to one classification instead of the Division I/II split.

Class 1A has more than 100 teams, and Northern Valley is one of the smaller schools. However, the Huskies are still a state contender with Sides, and seniors Ross Cole, Caden Bach, Jesus Saenz and Nick Stutsman. Speedy junior Ivan Varela transferred from nearby Southern Valley (Neb.)

Cole averaged 12.2 points a game, Bach nine, Saenz seven and Stutsman six. Cole made 49 treys and led the team with 45 percent shooting from 3, and Saenz delivered 36 treys on 41 percent.

“It’s always a give up a good shot to get a great shot, because we have got shooters everywhere,” Riley said. “We play a fun game of basketball.”

This feature is presented by Almena State Bank, a proud supporter of the Northern Valley Huskies. Best of luck in 2018. See our ad in the top right corner.

“We lost one guy, but we got some younger guys stepping up, and we got a new kid that moved in that’s going to make big impacts this year.”

“We are pretty confident coming into this year.”

“I have come to realize that shooting came naturally for me, but my dad was a pretty good shooter in his day, so I think that passed down, but his help, and my knack for perfecting my shot, just a lot of repetitions to get to where I am now. Even when I was younger, I was outside shooting, getting ready.”

“It’s extra special winning a state title in a small, tight-knit community, because the people you see everyday drive around through town, those people are at your games, no matter if they have kids, or grandkids or not even having anybody involved. They are at your games supporting you.”

“It’s a pretty old-school gym, it’s got the short ends on the baselines. There’s not a lot of room. … It’s nice when it gets full in there, and the atmosphere’s crazy. It gets pretty hot in there, have a lot of people in a little area, but it’s a pretty special place to play.”

“He has done his time and put a lot in, and we are just as happy to get one for him as we were for us.”

“Can’t think of anything that I would rather do than come back and help my dad farm.”

“I always liked math growing up, because working with numbers has always come easier to me, and as I have grown older, it’s become the greatest challenge as far as like college algebra now. It’s a challenge, and it’s one that I look forward to, because I haven’t always been challenged in school, and just the competitor in me just wants to overcome those challenges.”

“I always wanted to bring home state championships like my dad did watching his films when I was younger.”

“Definitely the community’s favorite place is the Hammond  Hut in Long Island. It’s started by a girl (MaKenna Hammond) in my class and her family. Redid a little building along the highway.”