v Faces in KS: Brayden White - Sports in Kansas 
Warning: include(../includes/bodytag.php): failed to open stream: No such file or directory in /home/kansass/public_html/ks/news/index.php on line 36 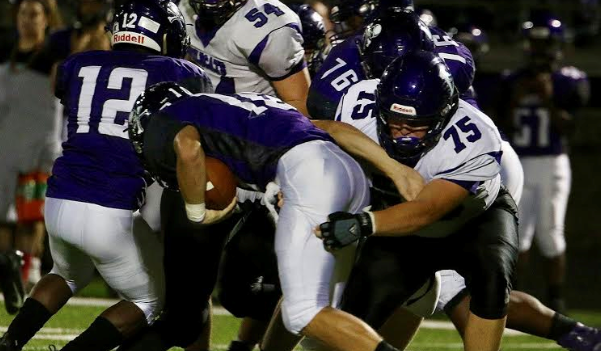 At 6-foot-3 and a half and 265 pounds Louisburg High School junior lineman Brayden White stands out on the football field. He also has the Wildcats playing their best football in quite some time as his team improved to 10-0 on the season last Friday in a dominating win over Piper as then enter the 4A sectional championship at home on Friday against state power and four-time defending state champion Bishop Miege.

White has always been a big kid and has been involved in football since he was a youngster. The junior is in his second season as a starter after starting every game on the offensive line last fall as a sophomore. This year he's transitioned into a two-way starter and a force on both sides.

“I’ve been involved in football since preschool. They needed more players on the Kindegarten and first grade team, so being a bigger kid, I was asked to join. I’ve been playing ever since.” White said.

White is one of the top junior lineman in 4A this season. White has 50 tackles from his defensive tackle spot, along with three sacks. He has helped pave the way for 3,519 offensive yards per game, 2,435 of those coming on the ground from his left offensive tackle spot. The Wildcats, led by head coach Robert Ebenstein, average 32.5 points per game on the undefeated season, while allowing only 8.2 points as a defense. The defense has only allowed 2.4 yards per rush of their opponent.

“I draw a lot of double teams. I think what makes me an impact player is the way I hustle. I won’t get outworked.” White said.

It’s not just White that is having the breakout year either. Star player Austin Moore is one of the top two-way players in the state, he was also highlighted on Faces in Kansas coming into the preseason. Not only is he one of the top rushers in Kansas at running back he also doubles as a linebacker. Madden Rutherford has also had a breakout year at the quarterback position.

“Our whole team is full of key players and many that I have played with since preschool. My O-line brothers get it done, Kiefer, Noah, Michael, Garrett and J.D. The bonds that we make with each other I will never forget.” White said.

White is also a 3.6 GPA student and lists history as his favorite subject. He also plays basketball and track and field.

Louisburg is always a consistent team and has had some high, high level football in 4A that has included a 2010 state championship. That team was led by Garrett Griffin who would go on to star at Air Force and have stints in the NFL, the coach on that team was his father, Gary. Louisburg is 32-21 all-time in the Kansas playoffs. A win on Friday would put them into the 4A semifinals for the fifth time in program history and first time in eight years. This year may be a surprise to many to be undefeated, as not many outlets would have had the Wildcats ranked most of the year. They have proved a lot of people wrong along the way and will enter Friday’s game against Miege as an underdog and looking to prove more people wrong. We caught up with the junior breakout lineman below in the latest Q&A edition of Faces in Kansas.

This feature is presented by Louisburg Sports Zone

When I was in preschool, I was a big kid for my size and they needed more players on the k/1 flag football team so they asked me to join.

What are/were your goals this season?

I don’t get out hustled on the field and I draw a lot of double teams.

We have a lot of traditions that are expected to be upheld by our team. Our stadium or stands are always full or overflowing with our fans at home and away games. We feed off of our fans and crowd.

If you’d like to see some old school hard-nosed football Louisburg is the place.

My whole team is full of key players, and many that I have played with since I was in preschool. I am going to give a shout out to the hogs in the mud, my o-line brothers: Kiefer, Noah, Michael, Garrett & JD.

The bonds that we make that make it a brotherhood, starting with summer weights, but also the freshman “Initiation” into LHS football.

Basketball and Track. I am a wrecking ball post player in basketball. I throw shot, disc and javelin in track.

Coach E helped me mature and learn more about football than I thought I could. He likes to have his jokes and fun, but when on the field it’s all business. He will also definitely let you know you’re doing something that needs improvement, but also give praise when you do something right.

I’ve received many emails, texts, calls, and mail from a variety of colleges and have been invited to watch games from the sidelines, and attend their camps. My goal is to play D1

Trout fishing on the White River, hanging out with my friends at the lake, and spending time with my family, especially my little brother, Briggs.

Veteran in the NFL and owning a ranch in the mountains

History, I make decent grades and get my work done at school so I don’t have to have a lot of homework.  GPA is 3.6

My parents, grandparents, and JJ Watt. All work hard to achieve their goals.

I won a baby contest when I was 1.

We’ve been the underdogs all year and proved them wrong every week. This will continue for football in 2019, Don’t count out the Louisburg BOYS!