v What impressed us after week nine of 2018 fball season? - Sports in Kansas 
Warning: include(../includes/bodytag.php): failed to open stream: No such file or directory in /home/kansass/public_html/ks/news/index.php on line 36

What impressed us after week nine of 2018 fball season? 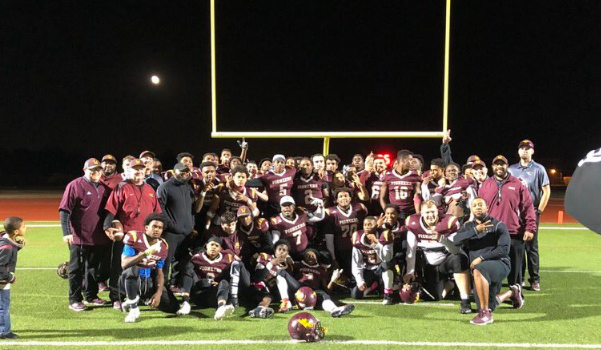 In possibly the best game of Friday night, Topeka High avoided the big upset with a 45-43 win against Hutchinson. Gregorio Leonardo kicked a 24-yard late field goal for the victory. Ky Thomas had 164 rushing yards and Jacqez Barksdale had 163 rushing yards.

Wichita West got its first playoff win in 17 years over Wichita East, 47-0. The Pioneers improved to 6-3 on the year.

The Sunflower League has had a ton of success over time and was once the best league in the state and always a powerhouse league. Sure SM East and Free State have been really good as of recent in the last four to five years, but the days where an Olathe team competing for a title every year have seemed to switch to the EKL power as of recent in the last three years. The league as a whole may be on the rise as nine of the 13 remain after week one of the playoffs. Nice see SMNW, SMS, SME, Olathe West (5A), Olathe East, Olathe North, Gardner Edgerton, Free State, and Olathe South all still active. Maybe we underestimated the league but they've certainly impressed so far this season.

Kapaun held off upset-minded Hays High, 48-28. The 7-2 Crusaders scored 21 unanswered points in the fourth quarter. The Crusader s finished plus-2 in turnover margin. Scott Valentas, a Columbia University commit, had 12 carries for 182 yards for three scores. Quarterback Jack Hacking rushed 11 times for 83 times and completed 9 of 16 passes for 96 yards and two scores.

Emporia beat Wichita Heights, 35-17, and continues to be a scary team in Class 5A with multiple early season close losses. Tyler Lindquist rushed for 98 yards, and senior Hayden Baumwart came up with two huge touchdown-saving tackles.

Olathe West got its first playoff win in school history as they knocked off KC Washington, 27-20, on Friday night. The program played a junior varsity schedule last year and now has a shot to make some noise in the 5A playoffs under head coach T.J. O'Neill.

Salina Central defeated Goddard Eisenhower, 20-7, for the second win over the Tigers this year. SC captured its first postseason win since ’13 and first seven-win season since ’07. Eisenhower coach Marc Marinelli resigned after the contest after six seasons of coaching GE. He is most well-known for taking the Tigers to a surprising 5A sub-state game in 2015 and another surprising run as a double-digit seed last fall.

Pittsburg’s Dylan White continued his standout season with four catches for 125 yards and had 178 all-purpose yards with three scores. Pittsburg defeated Spring Hill, 37-15, and gets Bishop Miege next.

Ulysses had to make another long road trip to Abilene for the second straight week. After a 26-21 loss in Week  8, the Tigers won 28-0. Ulysses is 4-4 with a three-win improvement after the tragic death of longtime coach Jason Kenny in the offseason.

Bishop Miege rolled over Labette County, 76-8, and eliminated the Grizzlies for the second straight season. Miege tallied four touchdowns in the final four minutes of the first quarter. Quarterback Sam Pedrotti delivered four total scores, and Brison Cobbins rushed for two touchdowns. Dylan Downing recorded a pick-six and a fumble return for a score. LC’s quarterback Easton Dean, an Iowa State commit, entered the game as one of the Kansas’ leading passers. He was 11 of 26 for 120 yards and three interceptions, all on tipped passes.

Scott City shut out Nickerson, 38-0. Moses Hinojos tied a career mark with a 40-yard field goal. Brandon Winderlin had five carries for 100 yards and two TDs. Wyatt Hayes finished with 21 carries for 97 yards and two touchdowns. Parker Gooden was 9 of 13 for 111 yards. SC is 9-0 for the ninth time in the last 13 years, according to Western Kansas News.

Chapman’s Blake Vercher recorded 10 carries for 232 yards and three scores. The Fighting Irish, after a 1-2 stretch in the last three weeks, defeated Clearwater, 48-14.

Hesston defeated Wichita Collegiate, 42-28, and have continued a turnaround after getting several key players, notably quarterback Cameron Cox and running back Parker Roth, hurt earlier in the season. Hesston led by 14 at halftime. Cox completed 13 of 20 passes for 205 yards and three scores and recorded 23 carries for 143 yards and a TD.

Smoky Valley remained undefeated with five interceptions and a pick-six with a 43-6 win against Cheney.

In a great moment, Wamego’s Cody Wanklyn scored the final touchdown of the 2018 Red Raider season. Wanklyn is a senior and has Down’s Syndrome. Wamego lost 34-20 at Perry-Lecompton.

Parsons got its first playoff win in 42 years on Thursday night as the Vikings have enjoyed a 7-2 breakout season under first year head coach Kurt Friess, a native of the town. They get Prairie View in round two, a team that won their district, that has also surprised everyone in 3A football this year under second year head coach Kyle Littrell.

Maur Hill got their first playoff win in 26 years as they knocked off Mission Valley, 27-18. That year in 1992 they would go on to win the 4A state title.

Sacred Heart sophomore backup quarterback Mac Hemmer, pressed into duty in Week 7 when multi-year starter David Anderson went down with injury, played well in a 34-7 road win against Ellis. Hemmer completed 12 of 20 passes for 215 yards and three touchdowns. Senior Trace Leners recorded five catches for 129 yards and a pair of scores, all in the first half. Senior Charlie Skidmore had five catches for 69 yards and a TD. Senior Ben Del Real recorded three sacks and sophomore Jared McCartney picked off two passes. Sacred Heart started 1-3, but is 3-2 since under second-year coach Garrett Galanski.

Jackson Heights’ Cooper Williams rushed for a pair of scores in a 36-28 win versus Valley Heights.

Inman defeated Stanton County, 44-10, moved to 6-3 overall and has a six-win improvement off last year. The Teutons had a strong collective effort as standout running back Matt Ramey didn’t play.

On Thursday, Victoria completed a wild win with a 34-28 home victory against Leoti-Wichita County. Senior quarterback Cooper Windholz missed the game with injury, and freshman Grant Schoenrock played admirably. He rushed 15 times for 134 yards and three scores. Senior Tyler Knoles scored the game-winning touchdown on fourth down with just under four minutes left and picked off a pass. Wyatt Dreiling recorded 13 tackles, had a fumble recovery for a score, and a key quarterback hurry late in the contest that forced an incompletion. Victoria rallied from a 14-0 comeback.

Central Plains posted its seventh straight shutout and has allowed just 22 points after a 50-0 win versus South Gray.

Axtell’s Hunter Koch broke the single season and career state record for eight-man TD receptions in a 58-12 win versu Pike Valley. Koch had three TD catches and has 30 receiving scores this year and 60 in his career.

Pawnee Heights defeated Cheylin, 118-85. PH’s Kade Scott tallied 14 scores. If the game had been eight-man, it would have set eight-man records for total points and touchdowns by a single player. Cheylin sophomore quarterback Colton McCarty finished with 12 total scores and 478 yards of total offense.