v Faces in KS: Zac Krause - Sports in Kansas 
Warning: include(../includes/bodytag.php): failed to open stream: No such file or directory in /home/kansass/public_html/ks/news/index.php on line 36

Zac Krause is having a huge year for Olathe West in first year of varsity program. 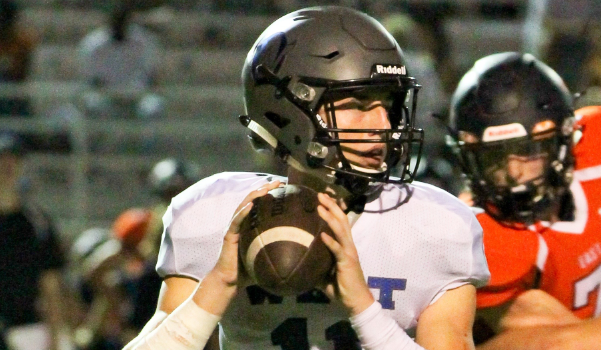 Olathe West is in its second year as a school and just its first year of varsity football after playing a junior varsity schedule one year ago. It’s never easy to get a brand-new program on the map, let alone getting them competitive with the majority of the athletes usually being younger.

The new school has had some success this year in its first year and it wasn’t necessarily expected.

West, under head coach T.J. O’Neill who was a successful coordinator on Mill Valley’s state title team, is just 2-6 this season but it’s a step in the right direction for a program looking to reach new heights in the Sunflower League. A big reason for that has been the play of quarterback and leadership of Zac Krause who transferred from Olathe North to play with his younger brother who started school as a freshman at Olathe West last fall.

“Transferring to West was a hard decision, but my brother, Trey, told me it would be our time together.   Being with him in practice every day and then playing with him on Friday night is very special. We have become closer and we’ve had a lot of fun this season.” Krause said.

Krause has passed for 1,345 yards with 12 touchdowns this season while rushing for eight more scores. He had 15 combined touchdowns playing as a starter at Olathe North over the last two seasons.

Olathe West is no heavy favorite to be a major contender in 5A football but their 6A schedule has certainly prepared them for a lot of the teams on the 5A East Bracket. For now, the focus of Krause and Olathe West will be to get their first ever playoff win in their first ever year of varsity football. They get Kansas City Washington this week in a game that West will have every opportunity to win.

“Our goal this season was to improve every week and I think we’ve done that. Our team goal is one game at a time and we are focused on getting a win this week.” Krause said.

We caught up with the outstanding senior student athlete, who features a 34 ACT score and a 4.4 GPA, below in the latest Q&A edition of Faces in Kansas.

My family has always been a sports minded family as my dad was on the Kansas State football team. I used to ride on my dad’s shoulders while he coached my older brother’s youth team. I dreamt of when it would be my turn to play.  Starting in preschool I slept and swam with a football and jumped over our basement couch with a football to start learning plays and moves.  This past game I actually hurdled a childhood friend who was on the opposing team with one of the moves I had practiced over my couch as a young kid. Our basement couch has a lot of scratches that could tell about childhood football memories with friends and my brother brothers.  I have always loved the game, watching the scheme, reading about players and challenging myself to put it all into action during the games.

Our team goal coming into the season was to improve every week and eight weeks later we have progressed exponentially. The team goal going into the playoffs is to take it one game at a time and make a run through the playoffs.

My individual goal this year was to help lead a young, talented team and do the job my coaches need me to do.

We do have the guys and coaches to make a run this year. We played a very tough schedule against some of the top 6A teams in the state. Our confidence has increased with what we have learned through that experience.

I think my intelligence, determination, and love of the game makes me the player I am. Working all these years, year around has prepared me both physically and mentally for each game and helps me make the correct reads in the game to get the ball where it needs to go. I also think my composure throughout the game allows me to continue to have success despite the outcome of the previous play and my composure allows me to complete plays when we get overwhelmed in the pocket. My coaches are truly another force with intelligence, encouragement and belief in me.  They put in an amazing game plan each week and I have an amazing offensive line and receivers who support each other.

Our game atmosphere is different than any other schools in Kansas. Each game is electric as everyone is cheering for the first team in school history.  With the passing game, the game can change drastically in a couple downs.

To me, the biggest player is my little brother, he is a Sophomore and starts at safety. He had 19 tackles one game to try and keep the opposing team off the board. Outside of him my offensive line does a great job of giving me time to throw the ball. They will be impressive to watch the next couple of years with a freshman and a couple sophomores in the mix. Plus, we have a very talented receiving core. Connor Delong is very long with great hands that loves getting up to jump for the ball. Caden Barnard is a smaller receiver who is very shifty after the catch. Jackson Novacek does a great job working with me when I scramble, and Ryan Wallace is another receiver who catches anything I throw to him.

My favorite part about football is the bond you create with your teammates and coaches. The brotherhood you create from battling together on and off the field is like no other. Playing under the lights with your brothers while all the fans are yelling is an amazing feeling. It is also pretty sweet throwing touchdowns too.

To me, Coach O’Neil is the best coach I have ever had. His football intelligence is off the charts, the schemes he comes up with always gives us a chance to succeed no matter who our opponent will be. On top of his football genius qualities, he just is an amazing person too. He cares about the team as a player and person.  He always keeps the mood light, and everyone has fun while challenging us to push it to the next level.  He cranks his old country music during practice.  He teases me by naming plays after me like “Slug.”  He has bonded my brother and I together as brother and teammates.

This offseason we had workouts every morning through the summer in order to get in shape for the season. This helped us begin to gel as team to prepare us for our first season together. In addition to this, my receivers and I threw routes as often as we could through the winter, spring, and summer to build chemistry, so we could be on the same page during the games. I also trained with my QB Coach Justin Hoover and Coach Gray outside of practice.

I plan on playing football at the next level. I have talked to some Ivy league schools, Drake and some smaller schools around here. Over the past couple weeks some Bigger D1 schools have begun to reach out including Northwestern.

During the winter I love to travel to Colorado and snowboard with my family. During the summer I like going to the lake and going cliff diving.

In 10 years, I will be working my way through medical school to become an Orthopedic Surgeon. It has always been a dream of mine to become a doctor and work with athletes.

My favorite subject in school is either math or science. Multi-linear Calc. is great for a challenge.  Anatomy is intriguing to learn about the body. I am in the running to graduate Valedictorian of my class. At the moment I have a 4.4 GPA and scored a 34 on my ACT.

My role model has to be my Grandpa Glace. He has dedicated his life to helping others, he has traveled to Haiti for over 50 years.  His outlook on life is so positive and how he interacts with other people is amazing. He makes an effort to know and love everyone he comes in contact.  I laugh when he starts a conversation with a stranger.  It is an amazing thing to see.

The best place to eat without a doubt is Kansas City Joes, their BBQ is unbeatable!

One thing an average person would not know about me is I am kind of quiet and nerdy outside of football. During football I am a very different person than my normal self.

Transferring to West was a hard decision, but my brother, Trey, told me it would be our time together.   Being with him in practice every day and then playing with him on Friday night is very special. Our coaches have a great time teasing us since Trey plays defense and I play offense.  You should have heard everyone on the practice field when Trey got a pick-six; just one time.  We have become teammates and closer as brothers.  Spectrum Sports filmed one of our games and it was pretty special to have them mention the Krause Brothers throughout the game.  It is a once in a life time thing and it has been great!