v Faces in KS: Jorge Hanschu - Sports in Kansas 
Warning: include(../includes/bodytag.php): failed to open stream: No such file or directory in /home/kansass/public_html/ks/news/index.php on line 36

Jorge Hanschu is having a huge year for Hillsboro. 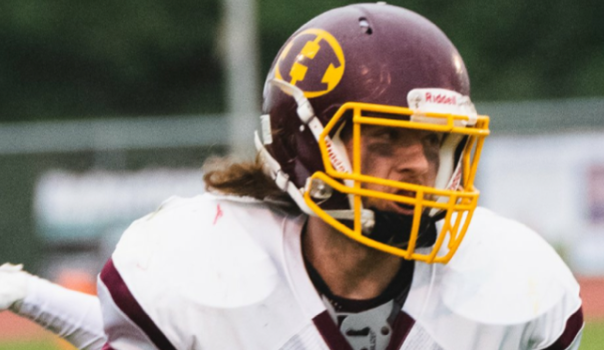 Jorge Hanschu, a senior at Hillsboro High School, was asked to be a starter the moment he stepped in high school three seasons ago in 2015. He’s played quarterback running back, wide receiver, linebacker and defensive back in his career. Last season he missed the entire season from an ACL tear durning the 2017 baseball season but his 2018 season has been a breakout one for the Trojans.

The 5-foot-11, 185-pound senior quarterback has been one of the better 1A quarterbacks in Kansas for 2018. He has passed for 1,309 yards with 15 touchdowns and 624 yards rushing with nine touchdowns through seven games this season. He's made quite the comeback from an ACL surgery.

Hanschu has the ability to extend plays with his speed, athleticism and it’s shown in 2018. Hillsboro was 1-8 last season and now with Hanschu back they are 6-2 & could be a force in this years 1A playoffs. Hillsboro only two losses came to 3A contender Hesston and 1A power Olpe. Hillsboro won just three football games combined in 2015, 2016, and 2017. The Trojans, under second year head coach Devin Metzinger, guarantee a winning season for the first time since 2012 when they went 10-1. It’s been quite the turnaround in a short amount of time.

Hanschu also gets it done in the classroom as a model student with a 4.0 GPA. He is a KU Honors Scholar. His favorite subject is math.

In addition to Hanschu having a huge year, Darian Ratzlaff, Brooks Gardner, Caleb Potucek and Wes Shaw area all having big seasons.

Hillsboro (6-2) will be back in action on Friday in the first round of the 1A playoffs with Yates Center on Friday.

My dad has always been an avid Dallas Cowboys fan, so I guess I learned to love the game from him. Then in 1st grade I got involved in Hillsboro’s flag football league. I have played football every year since.

My team’s goal is to make a run in the playoffs and ultimately win the state championship. As a team, we also have a goal of changing the football culture in Hillsboro. Over the last few seasons, our team’s record has not been too stellar. This season however, has been different. We are winning games and the crowds get bigger and bigger every Friday night. My personal goal is to hopefully receive an offer to play football in college.

I believe that we do. We have a pretty experienced team with a lot of weapons on both the offensive and defensive side. When we are firing on all cylinders, we are dangerous.

I think my ability to extend plays is one of my best attributes. I’m a dual threat QB. There have been multiple times this year where I have scrambled and made big plays for us. I also keep a calm demeanor throughout games. I never get too excited or too upset. As a quarterback, I believe that having a calming effect on the rest of the team is important.

The atmosphere is pretty great. People all over town wish me luck during the week, and then come to cheer for us on Friday. Our student section is also a fun part of playing on Friday night. The atmosphere in the locker room has to be one of the best I have ever seen. We like to rock out to songs like “Take me home country roads” and “Save a horse ride a cowboy”.

Our team is electric. If you come on a Friday night, you might see us have 40 points and 500 yards of offense. We also have a lot of guys who will have multiple big hits, which are fun to watch.

As a team, we stress the importance of everyone playing their role. Each person on our team plays a key part in our Friday night success, but if I had to name a few I would say that Darian Ratzlaff, Brooks Gardner, Caleb Potucek, and Wes Shaw are all major contributors.

My favorite thing about football is the brotherhood that you form with the team. I have so much fun going to practice every day and just joking around with the guys and the coaches.

I play baseball and basketball. In baseball, I spend most of my time behind the plate as a catcher. Last year I was an honorable mention catcher for the CKL. In basketball, I have played both inside and outside of the paint. Most of the time however, I play a shooting guard or small forward.

Coach Metzinger is a blast to play for. I like to crack jokes with him, even though he usually does not find them funny. He likes to keep practice up tempo and intense, which is good for our fast paced way of playing. He is also very honest. He will let you know when you are playing bad as well as telling you great job when you are playing good.

This summer we had a pretty intense schedule of lifting and conditioning. We started doing a workout called ‘The Murph’ once a week.

I am planning to attend a 4-year university and hopefully play football. I have not decided on a college yet, but whether or not I play football will affect my decision.

I enjoy being outdoors and hanging out with my friends. Going fishing all day in the summer with a few of my friends is one of my favorite things to do.

I see myself living in the mountains somewhere. I enjoy the outdoors, so I will probably have a job that allows me to work outside.

My favorite subject is probably math. Some of my best friends are in my class, so it allows me to have some fun while learning. I am a hardworking student who likes to have fun as well. I have a 4.0 GPA on a 4 point scale and am a KU Honors Scholar.

I would have to say that my dad is my role model. He is an extremely hard worker who takes pride in his work. He also puts others first, which has rubbed off on me.

The best place to eat in town is probably El Lorito, a Mexican restaurant. On Thursdays for the last couple years, a lot of us football guys will get together and eat at El Lorito. It has kind of become a tradition.

My house is a zoo. I have a dog, like 20 cats, 4 box turtles, and an alligator snapping turtle named Suzan.

I tore my ACL and Meniscus during the last baseball game of my sophomore season. I missed my junior year of football and basketball. I also have a fantastic head of hair.