Alex Schremmer of Great Bend is having an outstanding junior year. 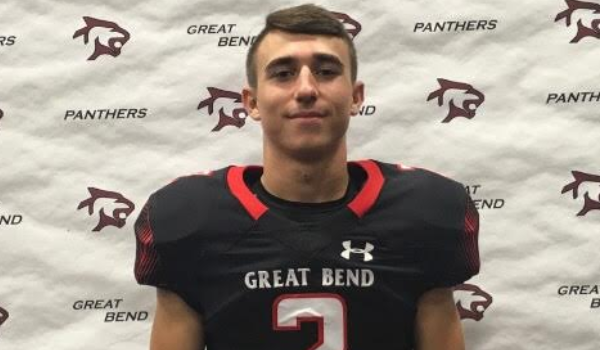 While a lot of the talk around the Great Bend High School football program seems to always be about Koy Brack on the offense and Dalton Miller on the defense, another breakout player has been in the making on offense in junior receiver Alex Schremmer.

Schremmer has had quite the year in his first season of starting varsity football. He had just one catch a year ago as a sophomore and fast forward to now, he has 843 yards receiving and 38 catches with 10 touchdowns through seven games. His numbers rank near the tops in all classes of Kansas.

The Great Bend junior, who stands just 5-foot-10 and 152-pounds, may be more known on the basketball court where he averaged 13.7 points per game and was an All-WAC pick as a sophomore last March, but now he has turned himself into a multiple sport athlete at the 5A level.  Schremmer has also been starting in baseball and basketball since his freshman year, where he plays short stop on the baseball team.

“Koy is very talented who gets me the ball in sutiations where I can excel. My offensive line makes it possible for us to do this. Without Koy or them, none of my routes could develop.” Schremmer said.

Brack has been one of the best quarterbacks in all classes of Kansas this season as he has thrown for 1,480 yards and 16 scores, he's also added nine rushing touchdowns. The Schremmer and Brack connection seems to be one of the best QB/WR combos in 5A so far this season. We’ve certainly seen good connections at Great Bend and it wasn’t long ago we were talking about Jacob Murray to Bryce Lytle. Lytle was also a smaller guy like Schremmer, standing around 5-foot-9 and weighing around 150-pounds.

Schremmer uses his knowledge of the game, quickness and route running to make sure he shines on offense. Not only has the combination been successful in the Great Bend 5-2 start under head coach Erin Bec, the program also has a real shot at being a 5A West contender. Yes, they’ve lost to Carroll and Great Bend, but they were in both ballgames and were right down to the wire with Carroll.

“Our goal right now is to win the WAC outright. After WAC, we want to compete for and win a state championship. I believe our team has a chance to go deep in the playoffs this year.” Schremmer said.

Schremmer may be a multiple sport standout but he also gets it done in the classroom with a 4.03 GPA. His favorite subject is math and he takes pride in never having any late work and succeeding in the classroom.

While the Panthers may have big goals, right now their focus is on the WAC and Garden City this Friday. We caught up with the junior breakout player, who is looking to become the schools all-time single season leader in receiving yardage this season, in the latest Q&A Edition of Faces in Kansas.

How did you get invovled with football?

I played my first year of football in 7th grade. I decided to start that year because my father first began football at that age too.

This season my goal is first win WAC outright. After WAC, my goal is to win a state championship.

I believe our team has a chance to go deep in the playoffs this year.

My knowledge of the game, quickness, and route running all attribute to my prosperity. My teammates also make me the player that I am. My quarterback, Koy Brack, is a very talented player who gets me the ball in situations where I can excel. My offensive line takes an exceptional amount of my success as well. Without them, none of my routes could develop.

A game of football on Friday night under the lights is something you’ll never forget. Nothing is better than the roaring crowd and representing your hometown by doing something you love.

Our offense is explosive and unpredictable. It will keep you on your heels as you watch and make you not want to miss a heartbeat. With our tempo we keep the action constantly, which makes it very enjoyable to watch.

Our experienced offensive line is a big key to our team. They do most of the dirty work behind the scenes that not many see. Our defense as a unit has also done great and has grown immensely throughout the season. Koy Brack has been vital this season in leading our entire offense and all the other skill players that I play alongside.

Over the years of playing and learning the game. My favorite thing about football is the challenge in showing you are better than the guy you are lined up against. This game shows who wants it more.

I am a three sport athlete. Along with football, I play basketball and baseball. In basketball, I have started varsity since I was a freshman. Playing point guard, I averaged 8.1 ppg and received Honorable Mention All-CKL my freshman year. My sophomore season I averaged 13.7 ppg and was awarded 2nd team All-WAC. In baseball I have started at shortstop both my freshman and sophomore year.

Playing under Erin Beck is very pleasing. He is a guy that pays a high attention to detail. If you put in the work and play hard he’ll love you. He has done a great job at getting me to my peak potential.

The team and I put a lot of hard work and time into the weight room and on the field through camps and 7 on 7. Being a 3 sport athlete keeps me active and prepares me in all areas.

At this point I am still young and haven’t gained any interest at the next level. My plans are open to all sports I play and my decisions will be based on the opportunities I am offered.

When practice is over, my favorite past-time to do is be with my friends and family. Although I do not get a lot of this time, I still value it with them as much as I do playing my sport.

In 10 years I would enjoy to see myself wrapping up graduate school. I wish to see myself settling in one spot and begin to start a family.

In school my favorite subject is math. Math has always come easy to me which is why I enjoy it so significantly. I am a student that is never late and has very few absences. This reflects my 4.03 GPA as I work very hard in all of my classes.

My role model is my father. He has grown and raised me to be the man I am today. The path that he created in his athletic career has led me to strive and succeed past the level he achieved. Without his love and guidance, I wouldn’t be where I am today.

The best place to eat in Great Bend is McDonalds for kids our age. It is the “go to” spot after any activity or event.

The average person wouldn’t know that I don’t eat meat and I love cheese pizza. I’ve been like this ever since I was a little kid in kindergarten. I also have a bouncy ball collection of over 200.

Can’t wait for what the rest of the season has in store for our team.