v Faces in KS: Landon Everett - Sports in Kansas 
Warning: include(../includes/bodytag.php): failed to open stream: No such file or directory in /home/kansass/public_html/ks/news/index.php on line 36

Landon Everett is having a breakout season for the 6-1 Canton-Galva Eagles.(photo:Braylee Doughman) 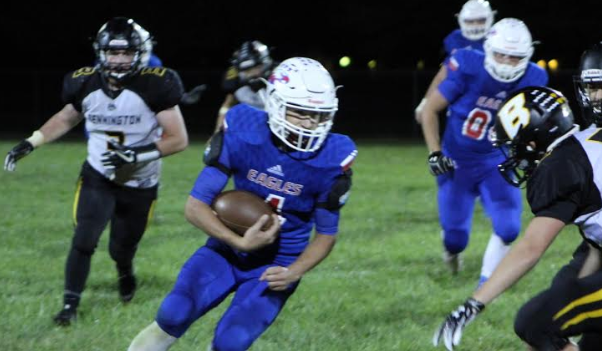 Landon Everett is having a breakout junior year at the quarterback position in 2018 for the Canton-Galva Eagles.

The 5-foot-10, 160-pound, quarterback and cornerback, has the Eagles off to a 6-1 mark after finishing 4-5 one season ago. In fact, the Eagles had four wins last year, two wins in 2016 and just one win in 2015. Second year head coach Shelby Hoppes and Everett have the Eagles clicking this year to six consecutive wins and a district championship.

“Coach Hoppes really knows what our team needs. He puts in hours on film. He spends a lot of hours in the weight room with us. He makes the sport fun to play. We try to chase perfection.” Everett said.

While nobody can be perfect, that attitude has seemed to help change this program to one to look for this season in 8M-I. It’s also one Everett has shined in as he has rushed for 1,043 yards on 119 attempts in the first seven weeks of the season. Defensively Canton-Galva has been huge in the takeaway game with Tyson Struber (5 INTS) and Everett with four interceptions. Connor Koehn also has 5.5 quarterback sacks.

The Eagles are also coming off their best win in quite some time as they defeated previously undefeated and ranked Solomon on Friday, 38-20. The six wins is the most for the school since a 7-4 finish back in 2006. Everett had five scores in the game while rushing for over 100 and passing for over 140 yards in the contest.

Canton-Galva is back in action this Friday against Herington. We caught up with the outstanding junior below in the latest Q&A edition of Faces in Kansas.

This feature is brought to you by Truck Insurance Mart, a proud supporter of Landon Everett and the Canton Galva Eagles. Best of luck the rest of the season!

I started playing in 6th grade and was thrown in at quarterback. I loved the sport. Being able to fly around and hit people. It’s a great sport. Builds a lot of character and helps with life skill for further in life.

Our first goal was a District Championship, which we completed. Now since we have our playoff spot the next goal is the State championship.

A personal goal was trying to lead the team on and off the field.

If we execute and be the most physical team, we have a good shot.

Wanting to be the best player on the field. I'm very competitive and when someone beats me in a drill or play it just adds fuel to the fire and makes me want to beat the man across from me even more.

My freshman year we had a horrible culture. Now my Jr year is totally different. We have way more people at games. The crowds are loud, people are showing up every game away or home. It’s a lot of fun. It makes the games a more special experience than what it used to.

We make a lot of big plays offensively. Our interior three Offensive linemen get people moved its fun to be a part of.

Interior 3 O-Linemen- Nick Pearson #35, Jay Nightingale #66, and Keaton Littrell #42 they do all the dirty work and get people moved.  They make the hole and I run the ball. It’s a hardworking line.

Brandon Huff #10 He is a key player defensively. Averages nearly 10 tackles a game. Great leader to keep the defense rolling.

Also like to give credit to the 2nd string team for giving us reads and playing defense and offense.

Shelby Hoppes is on his second year. He really knows what team needs. He puts in hours on film. Spends a lot of hours in the weight room with us. He makes the sport fun to play.   We rep plays, steps, and mesh points daily till perfection.

Started weights early spring. Our attendance was in the 90%. Our team averaged 20 pounds more all around then the previous year.

I currently right now am on a volunteer fire department in Galva. I plan to pursue a career in Emergency Medical services or Firefighting.

History, it’s something that always has something new and interesting. I like to be hands on with my school works helps me remember it better.

Like to give a lot of credit to the coaching staff for putting tons of hours in on game film, in the weight room, and at practice.