v Faces in KS: Cauy Rokey - Sports in Kansas 
Warning: include(../includes/bodytag.php): failed to open stream: No such file or directory in /home/kansass/public_html/ks/news/index.php on line 36

Cauy Rokey is having an oustanding year at linebacker for defending champion Sabetha. 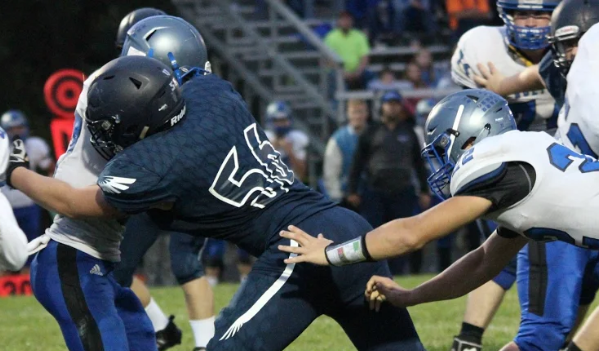 While everyone knows of the Gabe Garber or Elliott Strahm that have garnered all of the much-deserved all-state headlines in multiple sports, another player has been making just as big of an impact on the Sabetha football program in senior linebacker, Cauy Rokey.  And Rokey has had to do that through adversity after tearing his ACL last winter.  The Sabetha senior linebacker and lineman is having a breakout year for the defending 3A state champion Bluejays.

The 6-foot-2, 215-pound, senior, is one of the top linebackers in 3A this season for Garrett Michael and the Bluejays. This season has also been a battle for Rokey to get back to full strength after tearing his ACL two weeks before state wrestling last year. Rokey has great size and features a bench of 275 with a clean of 295. He also has the ability to find the football while making hard hits and not missing tackles.

“I’ve had to work hard to get back to the place where I am at and I am excited to finish one last season with the boys. I spent a lot of off-season going to therapy three times a week for two hours a day” Rokey said.

Rokey was a state placer in wrestling as a sophomore and would’ve likely been last season as well without an injury, instead he spent all of last spring and summer rehabbing his knee to get back to being one of the top defenders in 3A. Rokey has 60 stops, one fumble recovery this year, all in limited time due to blowouts. He had 106 tackles last year and 88 tackles as a sophomore. He also has three blocked kicks, two fumble recoveries, and two interceptions in his career.

Rokey, Strahm and Garber form one of the top 3A defensive units in the state, for a group that has allowed only seven points over the last three weeks. Sabetha has only allowed 59 points all season and some of that coming on the backups. Sabetha tasted success for a state title last year but this group isn’t just content with that as they continued to get better all summer.

“We did cardio, weights, all summer. Whether that was swimming laps, moving 600-pound tires, 7-on-7, we did everything we could do to leave no doubt we were ready for this season.” Rokey said.

Sabetha offense is also clicking just like the defense. Junior quarterback Gabe Garber leads the offensive unit with 559 yards rushing and 11 touchdowns. Joe Gruber is also having another huge year with 471 yards and six touchdowns. Mason Engelken is out for the year but has added in 464 yards and five touchdowns. Garber has also thrown for 432 yards on the year with five touchdowns with Ryan Stapleton being the leading receiver at 168 yards and a touchdown.

Sabetha (7-0), who has already claimed the district championship, takes on Royal Valley this week in the final district contest of the year before the 2018 3A playoffs begin next week. We caught up with the outstanding senior linebacker below in the latest Q&A edition of Faces in Kansas.

Scoby Bros. is a proud supporter of Cauy Rokey and the Sabetha Bluejays. Best of luck to the Bluejays over the 2018 football season. Visit us online here

The Sabetha community is very proud of Cauy Rokey for being chosen by Sports in Kansas as a featured football player over the 2018 season. It's an honor for Community National Bank to help sponsor such a fine young man and very gifted athlete. Congratulations Cauy!

Congrats to Sabetha Bluejays on their great start to 2018 and a heck of a year last year in 2017-2018! We are very proud of all your accomplishments and hard work. Keep it up and go Bluejays! Keim, TS, Inc. is proud to support Sabetha High School Athletics! Keim TS - Over 60 Years of Trucking. We Make It Happen. Visit us online at keimts.com

I started football when I was in 3rd grade, my dad was a coach. My older brother Brendan is two years older than me and I always looked up to him when he played.

As always another state championship, hopefully receiving all-state honors and being selected for the Shrine Bowl.

Yes, I am very confident in my brother’s abilities. We return a lot of guys and have a lot of Friday night experience.

I would say my ability to read the play and find the ball gives me an upper hand, as well as my size and drive for the game. .

The atmosphere is a tremendous; we just installed a new speaker system and have a new press box. I feel like our community supports the team greatly and most nights fills the stands.

I would tell someone who hasn’t been to one of my games to come because just from watching you can see the type of brotherhood all of our players have out on the field, we play hard, do our jobs, and I firmly believe we are one of the most physical teams in the state of Kansas from snap 1 to snap 200.

On our team we believe that everyone and every position on the field has a key part in success, but I would say some of the key players are Elliott Strahm and Carson Ukele on the line, they play a huge role in allowing me as a linebacker to do what I do. On offense Gabe Garber, Ryan Stapleton, and Joseph Gruber are a huge threat. Gabe being a player who can run and throw the ball, Ryan as a receiver who you can always lean on, and Joseph who is an all-around athlete really makes our team difficult to defend.

My favorite thing about football is probably the fact that it takes more than just me to accomplish a goal. It takes a whole team and group of brothers to have success no matter how good you are, and I guess it is pretty fun to get a stop on fourth down.

Growing up and continuing into high school I have always wrestled and felt like that has overall made me better athlete but I also enjoy golf and baseball. In football another position I play is long snapper and PAT Snapper.

Playing for Coach Michael I feel very blessed. He teaches more than just how to be a good football player but how to be a good man and father someday.  Not only is he a great Coach but he is a great role model and person to look up to. Our entire Coaching staff is the best in the state from the endless amount of time they put into film, game plan, and just how much they care about you as an individual. They teach us Faith, Family, Football and in that order. I wouldn’t want to play anywhere else or for anyone else. 0

My teammates and I put in lots of work in the off-season getting ready for the Game 1. I was recovering from an ACL tear and surgery going to therapy as much as 3 times a week for 2 hours and continuing to rehab at home. Monday through Thursday we went to weights for an hour doing everything from weights, cardo, and 600 pound tires.  We swam laps, played 7 on 7, and did just about everything we could to leave no doubt we were ready for this season.

I would like to play college football and continue my career, at this point I am not really sure where I want to go or exactly what I want to but have gone on visits to Fort Hays, Emporia State, and plan to visit Ottawa, Baker, and Concordia.

When I’m not playing sports I enjoy hunting and fishing; anything from Whitetail to Turkey. I also enjoy hanging out with friends, shout out to T7T.

Graduated with a degree, finding a well-paying job, and beginning a family.

Particular Topics in Media Tech, I am a work smarter not harder kind of guy when it comes to homework. I won homecoming King a couple weeks ago and My GPA is 3.75

My role model is probably my Grandparents, watching the way that they love the Lord and care for their family and grandchildren inspires me to live like they do.

My Grandmas house, honestly though I like the El Canelo Mexican restaurant on Highway 75, it’s pretty good.

I am left handed.

After tearing my ACL last year 2 weeks before State Wrestling I’ve worked hard to get to the place that I am, and I’m excited to finish one last season with the boys.