v Faces in KS: Caden Cox - Sports in Kansas 
Warning: include(../includes/bodytag.php): failed to open stream: No such file or directory in /home/kansass/public_html/ks/news/index.php on line 36

Caden Cox of Maize is having a breakout year for the Eagles. (photo: Sam Bartlett) 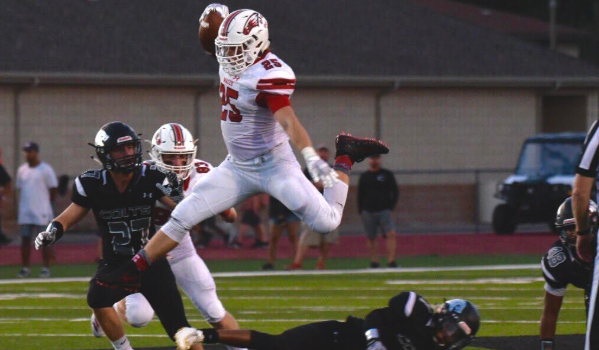 Maize High School junior football player Caden Cox is off to a breakout year for the Eagles who have started 4-0 in 2018.

Cox, a 5-foot-10, 193-pound, running back, slot, and defensive back, has rushed for 399 yards in three games this season with nine touchdowns. Cox has 4.53 40-yard dash speed, 270 bench, 425 squat. Cox is a utility player that can fit into multiple spots for the Maize football team whether that’s out of the backfield or in the slot. He also got it done defensively last season as a sophomore, he had 47 tackles and four pass breakups, a fumble recovery and two sacks as the Eagles went 9-2.

“We’ve had a lot of guys step up. We are a total team. Shout out to our offensive line for doing an amazing job this season.  We couldn’t be doing the things we are doing without the offensive line.” Cox said.

Cox has generated huge numbers in three games and missed the Valley Center game in week one with an injury but he’s now back to 100 percent entering this week’s matchup. Cox had surgery on July 2nd on the pinky bone in his foot. If you’ve seen his highlights, you can see that Cox has a powerful running style where he will run right over the competition or jump over them if needed. He is a combination of athleticism, speed, and power. Cox loves contact.

“The physicality is my favorite thing about football. I love it.” Cox said.

Cox’s big season has generated some interest from colleges including ones at the FCS level. Two weeks ago, he visited Drake and will visit North Dakota State on October 20th. Cox has also been invited last year to the US Army National Combine. In addition to that he was a NUC All-American.

Cox has played football since Kindegarten. In his youth days he was once a lineman but that has certainly changed as he is one of the states top juniors in 2018.

Not only does Cox get it done on the field he also shines in the classroom with a 4.1 GPA. He’s also a state qualifier in track and golf.

“My favorite subject is Math. I take pride in my grades and would say I am a good student.” Cox said.

Maize, led by head coach Gary Guzman, has been outstanding so far in their 4-0 start, in fact their defense hasn’t allowed a single point scored against it all year. Cox hasn’t had to play defense yet this season but could be asked upon if needed but right now it’s the offense that needs him the most. Caleb Grill is also one of the top three-sport athletes in the state and has shined once again for the Maize offense.

The Eagles, ranked third in 5A, will be back in action this Friday against Goddard (4-0), the number five ranked team in 4A.

We caught up with Caden below in the latest Q&A edition of Faces in Kansas.

Started playing since kindergarten because my neighbor played it.

I want to make my team better everyday. I want to break the school’s rushing record, and bring something home that’s never been to Maize before, a title.

Yes, we have weapons at every position. With our defense playing the way they are too.. Wow. Pretty tough team I’d say.

I’d say it is for sure my work ethic. My goal is to outwork everyone on that play, every play.  Also I am capable of  outrunning, juking, jumping over you, or even running you over every time I run the ball.. So its’s hard to know what way is the best to bring me down.

It’s a great atmosphere. We have great fans. Our students do an amazing job at every game. Lots of involvement, I love it. The community around us supports the team well. It’s an amazing thing.

In my opinion, I believe our team is the most exciting team in Kansas. We do all sides of the ball extremely hard, including special teams. We can score at any phase in the game.

We have a lot, so if I named them all I might name the majority of the team. But the 3 on each side of the ball would be extremely key are Caleb Grill, Preven Christon, Kj Hampton for the offense, and Noah Stanton, Carson Shively, and Tanner Ohmeis. Also huge shoutout to my O-Line, they do an amazing job.

The physicality is for sure my favorite part about football.

Coach Guzman also is the running backs coach, so me and him are close. He does an awesome job, always working us hard, pushing us, and talking to us, the drills we do everyday translate into my game often as well. We have consistently had good running-backs at Maize and the reason isn’t just the player, Coach Guzman can take a lot of credit for that.

A lot of players on our team do outside training, and go to camps and combines throughout the spring and summer as well. The team went to many padded camps this summer, and had weights and conditioning at 6:30 AM Mon-Thurs.

I visited Drake University two weekends ago, and I had a good time. I am visiting North Dakota State October 20. I am looking forward to meeting the great coaching staff,  and experiencing the atmosphere up there, I heard it was something special. I have a little looks from other FCS colleges too, along with some FBS such as Stanford, Arkansas, and K-State. My goal is to go play Division-1 ball.

I like to fish, play xbox, work out, and hang with friends.

I dream of  either player playing professional football somewhere or take over my father’s construction business.

My favorite subject is definitely math. I would say I am a good student. I take pride in my grades. I have a 4.1 GPA.

Christian Mccaffrey and Tim Tebow for sure.

Hands down Talliano’s Pizzeria in Derby.

I used to play lineman in little league.

I could not be doing the things I’m doing without my O-line. Nic Devore, Jake Quiggle, Eli Owings,

Nate Harding, Jacob Schonoff, and Mason Miranda do a very good job blocking. Also having my cousin Jake Quiggle blocking for me, as the center, is a real cool thing because I know I can trust him to get the job done every play. All glory to God.