v Faces in KS: Cade Ross - Sports in Kansas 
Warning: include(../includes/bodytag.php): failed to open stream: No such file or directory in /home/kansass/public_html/ks/news/index.php on line 36

Cade Ross is having a breakout year for Jeff West. (courtesy photo) 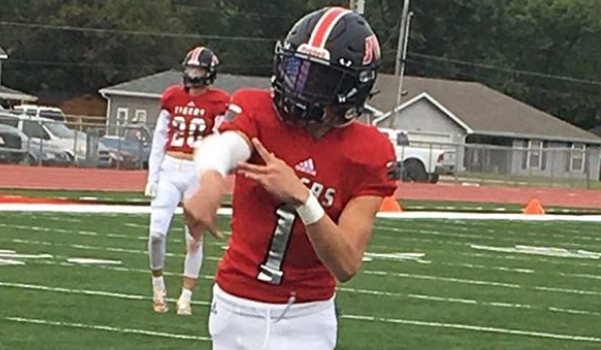 At 5-foot-7 and 135-pounds Cade Ross isn’t going to pass the eye test in street clothes as a football player but that certainly changes when the lights go on Friday Nights for Jefferson West High School in Meriden, Kansas.

The sophomore quarterback has had a breakout campaign so far for the Tigers who are 4-0 under head coach Steve Johnson after going 2-7 one season ago.

"Growing up, I’ve always been on the small side.  When people would ask what position I play, they were always shocked when I would say QB.  They assume the QB should look a certain way, which wasn’t like me. My parents taught me not to worry about it, and just play." Ross said.

Ross has certainly done that as he has passed for 959 yards with 19 touchdowns, completing 70 of 111 passes this year, while throwing just two interceptions. Ross ranks near the leaders in all classifications of passing yardage in Kansas for 2018. He is completing 63 percent of his passes. Ross may only be a sophomore but he has already thrown for 32 touchdowns and hasn’t even reached the halfway point of his high school career. He threw for 1,663 yards last season as a freshman for Jeff West.

“I want to give a shout out to all of our coaches and players. I can’t list all the guys because all of them contribute. Our offensive line has been outstanding in allowing me time.” Ross said.

Ross has been around football his entire life with his dad, Patrick Ross, being a former college football coach. Patrick was the head coach at Ottawa (2002-2003) and Lindenwood (2004-2016). His 2009 team lost in the NAIA National Championship while going 13-1. He has compiled an impressive 107-64 as a head football coach.

“I’ve been around the game my entire life. My dad was a college football coach, so I spent all of my free time at his practices and watching film, as well as watching recruiting film with him.” Ross said.

While his stats have been eye opening this year, his team is also off to a great start in 2018. Ross has spread the yards out amongst his receivers as well, making the offense very hard to defend. Zeth Unruh leads the receiving unit with 387 yards and five scores. After that, Quinn Neuenswander and Joe Anderson have each had over 200 yards while combining for 10 touchdown receptions. Last week Ross tied a state record with eight touchdown passes in a single game,all coming in the first half and five going to Quinn Neuenswander.

Jefferson West has victories over Holton, Royal Valley, Hiawatha, and Bishop Ward. While the 4-0 start is maybe a bit unexpected to statewide media, the schedule will get much tougher over the next several weeks with Topeka Hayden, Perry Lecompton, Wellsville and Santa Fe Trail in a brutal 3A district.

We caught up with the breakout sophomore below in the latest Underclassmen Edition Q&A  of Faces in Kansas.

This feature is presented by F.W. Huston Meriden Pharmacy, proud to support Jefferson West High School football. Visit us online here or see our ad in the right corner.

I’ve been around the game my entire life.  My dad was a college football coach, so I spent all of my free time at his practices and watching film, as well as watching recruiting film with him.

I’d like to help my team compete for a state championship.

We have an extremely tough league and district, but I believe our team is capable of making a run at the state title.

My ability to watch film, and make quick decisions based on how a defense reacts.  I enjoy the strategy of football.  The other thing helping me, is my teammates getting a good understanding of our offense.

We have a great hometown crowd.  We have filled our stands for every game.  We also have a lot of youth football players, that treat us like we are the best players ever.

Our offensive system is awesome to play in and fun to watch.  We have so many players that can make a play, so you never know what’s going to happen, or who will make a big play.  Also, our defense is playing extremely tough.

Fortunately, I can’t name just one or two guys.  I would need to list 20 plus guys. Here is what I can say, I’ve only been sacked twice in over 100 pass attempts, so my OL is doing their jobs. My Wr’s get open, and catch the ball. Our RB’s are great all-around players, run and pass.  The D is legit.

I’ll be honest- winning is the best part.  I love everything about football, but nothing feels better than winning a football game that nobody thinks you can win.  I’ve been a part of several of those games, and I plan on being a part of several more.

I’m a guard in basketball and have played since I was four years old.  Played baseball my entire life, I started a couple games as a freshman in the outfield at Jeff West. I also love Lacrosse and will play again this spring. I’m trying to talk my parents into letting me box or join MMA, but no luck yet, they say I don’t have time.

Coach Johnson is awesome.  He challenges us to be great people, and teammates.  “Make others around you better”, is what he preaches on a regular basis.  I love that he believes in us as people and football players.  Personally, he has been incredibly patient and understanding of all the growing pains we have gone through.

We lifted and ran, every morning.  Most importantly, we gained trust in each other, and convinced ourselves we could compete with the great teams on our schedule.

Not a ton of interest yet.  Southwest Baptist (SBU) has made an offer, and I know I love their offense.  My quarterback Coach from when I was in elementary school, Phil Staback is the offensive coordinator. He was an All-American QB for my dad.  I just want to find a place where I can be successful, the division or level doesn’t matter to me.  We have a lot of great football in our area, KU, K-state, the MIAA, HAAC, and the KCAC are all good football conferences. So we as players in Kansas are really lucky to have all these schools by us.  SBU is the front runner, but I still have a lot of time, so I will look at anybody.

Playing in the NFL

My favorite subject in school is chemistry. Right now I have a 3.4 GPA

My dad. He works so hard at everything he does, but still keeps me and my family as a priority, I know he passed up on some chances to coach college and pro football, so he could watch me play. That means a lot to me. Growing up, I’ve always been on the small side.  When people would ask what position I play, they were always shocked when I would say QB.  They assume the Qb should look a certain way, which wasn’t like me. My parents taught me not to worry about it, and just play.

The best place to eat is Chipotle.