v Faces in KS: Christian Stoner - Sports in Kansas 
Warning: include(../includes/bodytag.php): failed to open stream: No such file or directory in /home/kansass/public_html/ks/news/index.php on line 36

Christian Stoner of Silver Lake is looking or a big year in 2A. (Eagle Eye Photography) 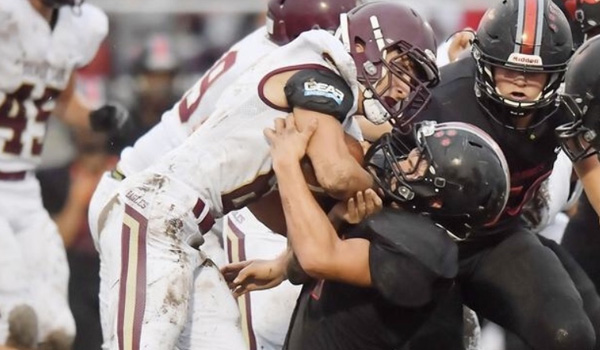 Silver Lake High School Football has established themselves as a perennial powerhouse team in class 3A and across the state of Kansas. Led by legendary Head Coach CJ Hamilton, the all-time wins leader in Kansas history, the Eagles went 12-1 last season, falling only in sub-state to eventual 3A state champion Sabetha, 17-14. A nice-sized running back at 6’1, 185 pounds for Silver Lake, Christian Stoner has contributed greatly to the Eagles success. In 2018, Stoner has already racked up 334 rushing yards and four touchdowns over the first two weeks. Stoner and Silver Lake will look for redemption in 2018 but this time in a new classification, the new 2A. A hefty task with six offensive starters returning and only two on defense, Stoner believes the Eagles’ experience and chemistry will fair them well this season.

“Our team is well developed and we all play so well together,” Stoner said. “So, that gives us an upper hand on other teams.”

This season, Silver Lake hasn’t relinquished yet. The team started off the year with a commanding 46-7 win on the road at St. Mary’s. They followed that performance by defeating rival Rossville in the “War on 24” in a tight game, 17-14. Stoner had 200 combined rushing and receiving yards in the win. Getting to play in this one was special to Stoner, as he was unable to play in the rivalry last season, missing the last half of 2017 with an injury. Stoner already has 47 carries in two weeks and will look to carry the majority of the load out of the backfield. He only saw 46 carries in all of last year, missing over half of the season due to injury. He still managed 5.5 yards per carry and four touchdowns in those six games.

For Stoner and the Eagles, Silver Lake unites the community.

“The town has so much football tradition and to play for that means everything,” Stoner said. “Our fans are the greatest around and manage to make so many of our games to cheer us on. I have the honor to play for one of the greatest coaches in Kansas, CJ Hamilton.”

Stoner also excels on the track as a vital piece of the Eagles’ 4X400 and 4X100 meter relays. Their 4X100 team made it to finals but fell short by a bad handoff this past season.

In the off-season, Stoner and his teammates worked out Monday through Friday and pushed themselves to limits to prepare for the upcoming season. He believes the team chemistry is such an amazing thing they have between them and that is what helps the most during the season.

The Eagles also feature Mason Griffin, one of the top multiple sport athletes in 2A/3A this season for Silver Lake. He is also the Eagles starting quarterback.

Science is Stoner’s pick for favorite school subject and although the future is unknown, he is up for any opportunity to play college football that comes his way. In ten years, Stoner sees himself as “being the same guy I am now and having fun with life,” he said. “I hope to have a good job and still having a good time doing it.”

Barry Sanders has always been someone Stoner looks up to.

“I like to think my style of play is the same as his,” Stoner said. “He wasn’t always a head on runner, but he would make so many guys miss to score a touchdown.”

Taco Bell is where you’ll find Stoner eating. “I could eat it every day and never get tired of it,” he said. “When people ask me where to eat, they already know where I’m going to choose.”

Silver Lake is currently ranked number two in Kansas Class 2A and will take on Riley County (2-0) this week in a battle-tested Mid-East League match-up.

We caught up with Christian below in the latest Q&A edition of Faces in Kansas.

This feature is presented by Stealth Performance, proud to support Christian Stoner and Silver Lake High School Football. Best of luck in 2018! See our ad in the upper right corner and visit us on Facebook here!

I enjoyed watching football with my dad and he got me started in flag football when I was 8. Then at 11 years old, I started playing tackle football and have loved it ever since.

I want our team to make it to state and to get over 1,000 rushing yards by the end of the season.

Yes, our team is well developed and we all play so well together. So, that gives us a upper hand on other teams.

I give my all on every play and try to make the team more successful every game. I push myself to my highest limits and I leave my heart on the field.

It’s such an amazing atmosphere. The town has so much football tradition and to play for that means everything. Our fans are the greatest around and manage to make so many of our games to cheer us on. I have the honor to play for one of the greatest coaches in Kansas, CJ Hamilton.

Our team has so much energy on the field and we are always making big plays that surprise everyone.

I would say the most important guys on the field are our offensive line. They give they’re all every play and try their hardest to protect us in the backfield. We can’t forget about our receivers though. They are the ones who always make big plays when we need them the most.

My favorite thing about football is playing with my team. We’ve all grown up together playing the sport and we have a unique ability to play so well together and teams can’t keep up with us.

The only other sport, I do is track and our team went far last year. I ran on the 4X400 and the 4X100. Our 4X100 team made it to finals, but fell short by a bad handoff. Track is one of my favorite things to do in the Spring.

It’s one of the greatest experiences ever. He’s such a smart guy and knows how to get us ready for the games. He is always positive and gives us the best pointers to prepare us for our hardest games. yes, he can get mad at us, but what coach doesn’t? He will go down in history as one of the best coaches to ever live.

The team and I worked out Monday -Friday and pushed ourselves to our limits to prepare us for the upcoming season. Our team chemistry is such an amazing thing we have between all of us and I think that is what helps the most during the season.

I would like to play college ball if I can, but if not, that's ok. I got to play with some of the best players and got coached by the best coaches also.

I like to hang with the buds and spend time being in a fantasy football league we created called, “Not a Chance.” I try and get a good workout every now and then to stay in shape too.

I see myself kind of being the same guy I am now and having fun with life. I hope to have a good job and still having a good time doing it.

Science has always interest me when it comes to school. I like the cool things you can do with chemicals and substances in the lab.

Barry Sanders has always been my role model since I’ve been little. I like to think my style of play is the same as his. He wasn’t always a head on runner, but he would make so many guys miss to score a touchdown.

Taco Bell is by far the greatest restaurant to ever be invented. I could eat it everyday and never get tired of it. When people ask me where to eat, they already know where I’m gonna choose.