v Faces in KS: Trenton Plinsky - Sports in Kansas 
Warning: include(../includes/bodytag.php): failed to open stream: No such file or directory in /home/kansass/public_html/ks/news/index.php on line 36

Trenton Plinsky and Osage City look to make some noise in 2A. (photo: Gary Lowman) 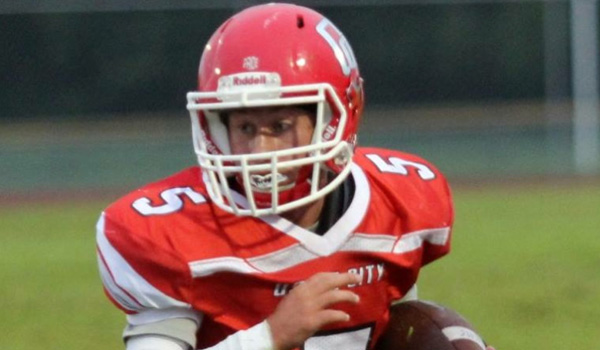 Head Coach Andrew Gantenbien’s Osage City High School football team is one on the rise in Class 2A. After going 7-1 in league play and 9-3 overall in 2017, falling to eventual state champion Sabetha, Osage City is off to a hot 2-0 start in 2018. The Indians can credit much of that to senior and three-year starter Trenton Plinsky.

When asked about his team’s shot to make a run this year, Plinksy answered confidently.

At just 5’4” and 135 pounds, Plinsky hasn’t let his size limit him yet. Last season, Plinsky carried the ball 37 times for 159 yards and five touchdowns. He reached the end zone seven more times on 35 catches for 712 yards. He also garnered 269 yards on 11 kickoff returns.  Defensively, Plinsky didn’t take any time off either. He recorded 45 solo tackles, 50 assisted, five for loss, five interceptions, a fumble recovery, and a forced fumble.  For his efforts, he was named a unanimous First-team All-League wide receiver and defensive-back, honorable mention All-State by the Topeka Capital-Journal and an honorable mention non-senior by Sports in Kansas.

Osage City returned nine starters on offensive and eight on defense. Despite the threat Plinsky brings to both run and catch the ball, he will be behind center much more this year, starting at quarterback for the Indians. His versatility has made for a great year-round high school sports career; however, as Plinsky and the Indians were 2016 Basketball State Champions. He was also a State Golf Qualifier in 2016, and a League Golf Champion in 2017. Additionally, Plinsky was honored as an All-League Basketball player and a League Champion Triple Jumper & State Qualifier in 2018.

2nd Grade flag football began Plinsky’s love for the game of football. His force as a player comes from his ability to scramble and get out of tackles to keep plays alive. Besides the fun and success this allows Plinsky to have on the field, he enjoys the relationships the game has allowed him to build.

“Playing with my friends, growing up and building a relationship that's going to last when we all leave,” Plinsky said. “We’ll have memories we can talk about again.”

In the classroom, the student Plinksy strives to be is a “hard worker who never turns anything late and is always on time.” His GPA throughout his high school career is a 3.6. Sports medicine or physical therapy are two career paths Plinsky has thought most about, which he hopes to pursue while continuing his football career.

Plinsky notes that playing for Coach Andrew Gantenbien is “tough” because he expects everyone to come out each day and give their best. The expectations are certainly high for Osage City after their breakout year last season. Through two games, Plinsky has tallied 170 rushing yards and three touchdowns in wins over Northern Heights and Lyndon. Plinsky has seven touchdowns over the first two weeks including over 200 yards passing and 170 yards rushing. Not only did the Indians blast Lyndon, it was their first win against them since 2009.

According to Plinsky, he and his teammates got into the weight room as much as possible in the off-season. Plinsky’s maxes include a 325-pound squat, 185 pounds on both bench and clean, along with a 4.75 40-yard dash. His team built extra chemistry by staying late and running routes.

“My role model would have to be Jordan Tice,” Plinsky said. “He is also one of my coaches. He went on to play football at Emporia State University and grew where I've grown up. Through the years, Jordan and I have become really close, kind of like brothers. I respect him and he always has my best interest.”

Osage City (2-0) is back in action on Friday against Council Grove on the road. The Indians are yet to allow a point in 2018.

This feature is presented by Jerry's Thriftway. Proud to support Osage City High School Football and Trenton Plinsky! See our ad in the upper right corner.

This feature is presented by Osage Sports and Family Chiropractic. Best of luck to the Indians in 2018! See our ad in the right corner and visit us online here!

I started when I was younger playing flag football in 2nd grade and it grew from there.

I have three goals; win districts, win state, and make it to the Shrine Bowl.

Yes, right now we are called the "dark horse" in 2A.

My ability to scramble and get out of tackles to keep plays alive.

We've always got a strong crowd. The atmosphere is loud with all of the fans and the band. They get into the games and make us feel like we have a strong support system backing us.

We are a good team that makes games fun to watch.

Playing with my friends, growing up and building a relationship that's going to last when we all leave, and have memories we can talk about again.

I play basketball and I've been on varsity since my Freshman year and we were the 3A State champions in 2016. I have played golf since my freshman and have gone to state two out of the three years. My sophomore year I decided to dual sport and go out for track and ended up going to state last year in triple jump.

It is definitely tough. He expects everyone to come out each day and give their best.

What did you and the team do in the off-season to become better and plans to get better?

Got in the weight room as often as we could. We would also stay longer after weights and throw routes while working on chemistry between us players.

Hopefully going on to play college ball and contributing to the team. But what I've thought about the most is going into Sports Medicine or Physical Therapy.

Spending time with friends and watching football with them.

Having a successful career in something I enjoy doing.

I would have to say Math. It just comes easy to me for the most part. The student that I am is a hard worker who never turns anything late and always on time. My GPA through out my High School Career is a 3.6.

My role model would have to be Jordan Tice he is also one of my coaches. He went on to play football at Emporia State University and grew where I've grown up. Through the years Jordan and I have became really close, kind of like brothers. I respect him and he always has my best interest.