v Faces in KS: Taye Washington - Sports in Kansas 
Warning: include(../includes/bodytag.php): failed to open stream: No such file or directory in /home/kansass/public_html/ks/news/index.php on line 36 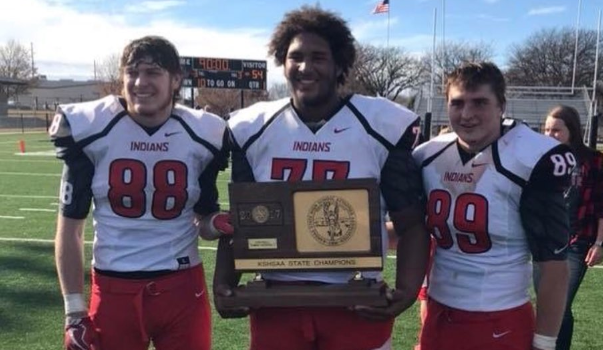 When people think of 8-man football they may think of smaller players and not enough numbers due to the small school size. That can be the case at times, but not always, and definitely not when you travel to Hoxie, Kansas to take a look at their 6-foot-5, 330-pound, nose-guard and center, Taye Washington.

Washington, who helped the Indians to an 8M-I state championship last fall as a junior, is one of the biggest players in the state. He’s also a player that is receiving college interest and could put himself as an even bigger prospect this season with more attention. Another crazy fact is that Washington isn’t even the tallest player on his 8-man football team in an entire high school that has 81 students in the last football enrollment count. Sophomore Harlan Obioha is 6-foot-8 and weighs 310-pounds on the offensive and defensive lines.

Washington is not just a big body either. He can move well for his size with a 5.5 forty-yard dash time. He is a former wrestler that was a state placer going fifth as a freshman and state runner-up as a sophomore. There is also a 285-pound weight limit for wrestling, so he’s no longer a high school wrestler due to focusing on football and keeping his size. He also gets it done in the weight room as he can clean over 300-pounds and squat 440 pounds.

Washington has been an impact player since his sophomore year in which he registered 56 tackles with 6.5 sacks. Last season he had 47 tackles despite taking on double teams every snap. As a senior this year he has really shined with 20 tackles through the first two games. Washington was a Sports in Kansas Non-Senior honorable mention pick last fall.

When Washington isn't playing football he likes working on the farm or hunting. He plans on playing football at the next level and has offers from Chadron State and Fort Hays State at the Division II level.

Hoxie will travel to Quinter on Friday. Hoxie is not only led by Washington, they also feature Jarrod Dible, Colton Heskett, Sam Bretz, Jared Kennedy, Logan Weimer, Wylie Weems and Dylan Weimer. Weems has stepped in nicely for the graduated Latham Schwarz, last year’s 8M-I Offensive Player of the Year from Sports in Kansas. Kennedy is the returning starting quarterback and had a huge season in 2017. Weems also has 20 tackles like Washington while Dibble, Bretz and Heskett each have 17. Dibble, Heskett and Washington form likely hands down the best defensive line in the 8-man ranks. Hoxie truly gets it done with a total team effort.

We caught up with the senior all-state candidate Washington below in the latest Q&A edition of Faces in Kansas.

This feature is presented by Pam Washington Bucking Bulls, proud to support the Hoxie Indians. Best of luck in 2018!

Chet Kuplen, CEO/Founder of Sports in Kansas, on Washington

"There's no question that he passes the eye test and has Division I size. He may be a little underrated because he's not getting to see kids his size every week and go against him, so that can be hard to judge. He's a sleeper prospect that may generate some more interest this year. He needs to get stronger in the weight room but I really think if given the right chance the sky could be the limit for him. He just needs a shot. He has some very nice D2 opportunities right now and that may end up being the right fit for him. I've seen him at two combines in the last year as well, he can move much better than you think he can. He needs some work sure, but so do a lot of prospects. He has 6'5" 330 though and not many can say that."

My parents put me in it

The technique that I have been taught over the years

It’s really good for a small town. You would be surprised to see that the stands fill up on friday nights and it get real loud. The community is really great in supporting all t of the sports.

I think that a lot of people think that 8 man is pretty boring, but with us we bring the excitement and we're a team that is physical and likes to hit

I do track, I throw the shot put. I also used to wrestle but not anymore, as a freshman I went 31-9 and placed 5th at state, sophomore year I went 22-5 and placed 2nd at state.

To play for Coach Baar is an honor. He is really good with the linemen. He teaches us the right technique and be good football players and shows us discipline which will help us later on in life.

This summer we worked on incorporating new people into new rules to our offense.

I would like to go and play college football somewhere but not sure yet.

Science would have to be my favorite subject. I would say i’m a decent student.

My dad is my role model. He really pushes me to be a good athlete and a good man