v Sports in Kansas: Football Games to Watch - Week Three - Sports in Kansas 
Warning: include(../includes/bodytag.php): failed to open stream: No such file or directory in /home/kansass/public_html/ks/news/index.php on line 36 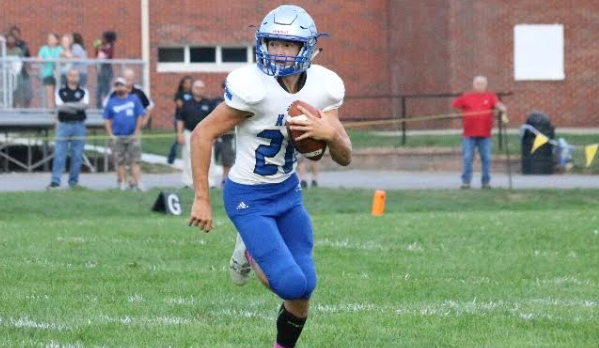 Games to Watch for Week 3. One game per classification

For the first time in over 10 years, one of these two teams will start the season 3-0. Campus hasn’t done so since they did it in two consecutive seasons in 2004 and 2005, while the Eagles haven’t accomplished the feat since 2006. Both of these teams have been impressive in their first two games of the 2018 season. The Colts won on the road at Dodge City, 49-7 and at Newton, 29-20. Maize, on the other hand hasn’t been scored upon in the first two weeks, winning by scores of 49-0 against Valley Center and on the road in Hutchinson. Will the Eagles be able to post another shutout, or will Campus find a way to reach the endzone in their home opener? Campus is led by a trio of seniors on the offensive side, Evan Kruse (QB), Tyler Kahmann (WR) and Cameron Harvey (WR), while the defense is held down by senior and South Dakota State commit, Quinton Hicks from his middle linebacker position. Maize is led by all-state QB and basketball star, Caleb Grill. Grill is also committed to South Dakota State, but to play basketball next winter and is also one of the state’s best quarterback’s. This will be an intriguing game south of Wichita on Friday night.

The Wichita NW Grizzlies have proved themselves to be one of, if not the best team in class 5A through the first two weeks of the season and they’ll be tested once again on Friday in a battle with the Panthers from the WAC. Northwest’s offense is averaging 39.5 points per game, while the Great Bend defense hasn’t given up more than 12 points in either of their first two games this season. The Grizzlies have all of the tools, whether it be on the offensive side of the ball with the combo of Iowa State commit, Breece Hall (RB) or Roy Johnson (RB) in the backfield, or the defense led by Oklahoma commit, Marcus Hicks (DE) or Josh Carter (LB), this team is dangerous and will cause a lot of problems for Great Bend, especially in Wichita. The Panthers will have to put a lot of points on the board, because the Grizzlies offense has too many weapons and can strike in a hurry with Steve Martin’s no-huddle offense. Great Bend will have to get big games from Koy Brack (QB) on the offensive side, he’s their leading passer and rusher thus far through two weeks, but he’s going to need more help from his teammates to leave Wichita with a big-time win.

It seems as if the Bishop Miege Stags play a ranked opponent, or a team with an unbeaten record every week… but the result is always the same, Miege keeps the 0 in their loss column, but their opponent adds a 1. The dynasty that has been built in Roeland Park is remarkable. Every year coach Jon Holmes is able to reload with Division 1 caliber players and this year is no different. The Stags have dominated Blue Valley North and Blue Valley West in their first two games of the season. Mill Valley enters week 3 with a perfect record, but both wins for the Jaguars have been close. The Jaguars opened the season with an 11-point win over Blue Valley West and then a one-point win over St. James a week ago. Last year’s game was dominated by the Stags, 54-21, but for Mill Valley this is a chance for them to make a statement on Friday night. Miege is led by all-state running back, Brison Cobbins. He has been one of the most electrifying players through the first two weeks of the season and will look to have another breakout performance against the Jaguars. Mill Valley has been led by Jordan Preston (QB) and his arm, but will face arguably the toughest defense they’ll see all season long on Friday.

Both Perry-Lecompton and Sabetha have been dominant on both the offensive side and defensive side of the ball in the first two weeks. Perry-Lecompton is averaging 57 points per contest, while their defense has yet to allow a single point on the scoreboard. The defending 3A state champs on the other hand are averaging 44 points per game and have given up just seven points all season. This will be an interesting game to keep an eye on in northeast Kansas, with both teams scoring a lot of points, and not giving up much. So, we’ll either see a shootout, or a very low scoring game on Friday in Sabetha. The Bluejays are led by all-state lineman, Elliot Strahm, a guy that helped pave the way for over 300 yards on the ground per game last season. Gabe Garber, Joseph Gruber and  Mason Engleken lead a loaded backfield for the Bluejays. Perry-Lecompton is led by Dalton Kellum (QB), as he can do it with both his arm and his legs to get the job done. These two teams could very much so meet later on in the 3A playoffs down the road.

Two of the best teams in the northern part of the state will meet on Friday, when the Phillipsburg Panthers will make the 29-mile drive east on highway 36 to Smith Center. Smith Center has outscored Hays-TMP and Norton, 85-0 through the first two weeks, while Phillipsburg has outscored Ellis and Plainville, 83-15 in their two games.  The Redmen are the defending 2-1A state champs from a year ago, while Phillipsburg made a deep run in the 3A playoffs, so both of these teams are used to winning and Friday night will give a little bit of bragging rights moving forward. The Redmen have won their last 13 games, dating back to last year’s game between these very two teams when the Panthers won, 23-0 in Smith Center on Sept. 8, 2017.

These two teams may get overlooked by some, but both have extremely talented teams and can make some noise in the playoffs later on in the season with Hutch Trinity playing in 2A and the Cardinals in 1A. The Celtics return home for the second straight week and have yet to allow any points on the scoreboard through two weeks, shutting out Marion, 26-0 and Inman, 38-0. They’re led by the trio of Kaleb Hammeke (QB), Aaron Guerrero (RB) and Zane Schroeder (FB), as all three of them have been a big part to both the offense and defense for the Celtics. They’ll have their hands full on Friday when the Cardinals come to town. Ell-Saline has beaten Sterling, 48-7 and Remington, 48-6 through the first two weeks and are led by standout quarterback, Nick Davenport. He has been one of the top players in 1A this season and will be one to watch as the season progresses. Davenport passed for two scores and rushed for two more in last week’s win over Remington.

South Central has jumped into most 8-Man Division 1 rankings after an impressive win over Spearville last Friday, 24-8. The Timberwolves handed Spearville their first regular-season loss since the 2013 season. The T-Wolves beat Bucklin, 51-6 on the road to open up the 2018 season. The Longhorns will play their first game in front of the home crowd when they welcome the T-Wolves to town on Friday night. Hodgeman Co. won 38-12 at Dighton in week 1 and then edged out a 36-24 win over Medicine Lodge last week. The Longhorns had a significant lead in that game, but allowed the Indians to get back within four points and then Hodgeman Co. would get a fourth-quarter score to make it a two-score game. The Longhorns have won the past two meetings over the T-Wolves, but if South Central can pick up a win here, then they’ll continue to rise in the poll and could make some noise later on this season.

The No. 1 vs. No. 2 team in 8-Man Division 2 will square off under the lights in Hanover on Friday night. It doesn’t get better than this. It seems like we have one of these types of games every Friday night at the 8-Man level. Hanover will be playing their first game at home this season after traveling the first two weeks and winning, 46-0 over Pike Valley in week 1 and 52-6 last Friday over Doniphan-West. The Wildcats have been one of the most dominant teams at the 8-Man level over the past several years and they continue that success into the 2018 season. The Wildcats have now won 27 consecutive games after last week’s dominating win over the Mustangs.  Every year it seems as if a new Bruna is on the Wildcats roster and this year, there are six of them. The Grizzlies won in week 1 by forfeit over Blue Valley Randolph and then last Friday they took down Lakeside-Downs with a big 52-0 win. Senior Zane Colson (RB) led the Grizzlies’ rushing attack last Friday with a 150-yard performance on 13 carries and a pair of touchdowns. Colson also returned a kickoff for a score in the win. The Grizzlies in all carried the ball 30 times for 291 yards (9.7 yds/carry) and five rushing scores. Hanover has won the last four meetings in the series, with the last Mankato-Rock Hills win coming on Sept. 7, 2012.