v Faces in KS: Jake Burke - Sports in Kansas 
Warning: include(../includes/bodytag.php): failed to open stream: No such file or directory in /home/kansass/public_html/ks/news/index.php on line 36 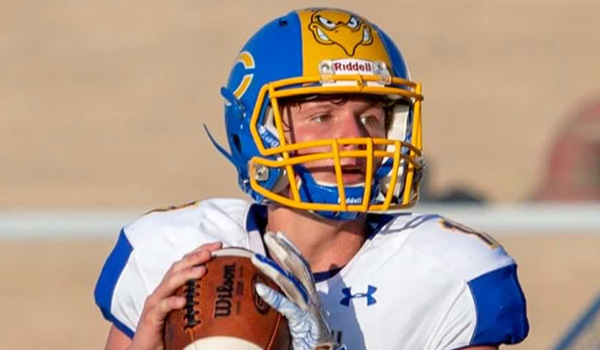 Jake Burke has been around football his entire life being the son of a coach. His father, Justin, is the head coach at Chaparral High School, this being his ninth year at the program. Chaparral serves the communities of Anthony and Harper. Burke has revamped the program and is 48-32 at the school and has 22 years of experience as a coach that also included a stint as the head coach of 6A Dodge City.

“I’ve been around football my whole life being the son of a coach. It’s cool, but different for me than others to play for a coach who’s also your father but it’s good. We are able to sit down, watch film and discuss the game plan and plays every night.” Burke said.

Burke has been a four year starter at safety for Chaparral, where he has been a two-time Central Plains All-League defensive back as both a sophomore and junior. He’s also been an all-state honorable mention pick. Last year he was a unanimous pick as a defensive back in the CPL. He has 191 tackles in his career, while being a part of 33 touchdowns on offense through the air or on the ground.

Burke is off to a big senior campaign so far in his first two games of 2018. He has passed for 386 yards with six touchdowns while rushing for 202 with four more scores. He also has 19 tackles and has forced two fumbles on defense.

Burke, who features handheld 40-time of 4.52 seconds, has offers from Northwestern Oklahoma State and Southwestern at the next level and holds a 3.6 GPA. He plans to play college football at the net level where he plans to major in either accounting or engineering. Burke is also a state qualifier in the triple jump and was part of a third place 4x100 team at state two years ago in 3A.

The Roadrunners, who have played in one of the toughest 3A districts the last several seasons, are now in the new 2A classification after going 6-3 in last years 3A. They return seven on offense and seven on defense. This year’s team is off to a 2-0 start and are in a loaded six-team 2A district with Wichita Independent, Whitewater-Remington, Garden Plain, Conway Springs and Hutch Trinity. Four teams advance to the playoffs. We caught up with the senior standout below in the latest Q&A edition of Faces in Kansas below.

This feature is presented by Knapic Chiropractic in Anthony, Kansas. Proud to support Roadrunner Football! Visit us on Facebook here

I’m a coach’s son and have grow up around the game.

Win districts with the ultimate goal of winning State.

Yes we do, with a great coaching staff and nine Seniors on offense and seven Seniors on defense.

The ability to make others around me better and fight through the tough situations.

The schools excited on Friday nights. Chaparral flags are displayed all over both towns.

We are a fun team to watch that makes explosive plays and we never give up.

It’s physical, but also it’s one of the only sports that relies on every player working together and getting the job done.

It’s different for me to play for my coach from most players because he’s also my father.  It’s  good. We are able to sit down, watch film and discuss the game plan and plays every night.

Our team was in the weight room and running throughout the summer trying to push ourselves to get better  and to  get in shape.

Playing football at a college I can make a difference at while also getting  a great education.  I’m currently thinking majoring in Accounting or Engineering.

I enjoy watching sport, hanging out with friends, barbequing, and traveling.

Having a successful career and a family.

Strength and Conditioning. I’m a hard working student who will get done what is asked of me. My GPA is a  3.6.

I’ve always looked up to Tom Brady because he’s a winner. He’s always found a way to win even in the hardest situations.

Another role model I've had growing up is Kale Pick. He was the Quarterback at Dodge City where I grew up when I was younger. He went on to play football at KU.