David Kemp went 54 and 43 yards last week on field goals and only a sophomore for Andover. 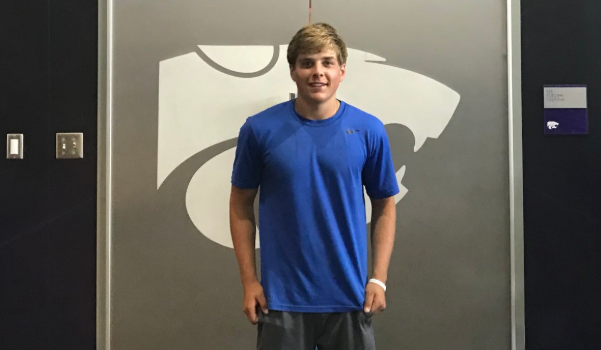 In this weeks underclassmen edition of Faces in Kansas, highlighting some of the states rising athletes, we go to Andover High School where sophomore David Kemp made headlines last week with a 54-yard field goal and 43-yarder in the same game. It’s quite the accomplishment at any level of competitive football, even in the NFL.

But it isn’t Kemp’s first success as a kicker. In fact, as a freshman last fall he made the MaxPreps Freshman All-American Football team after hitting seven of 11 field goals with 48 touchbacks. The long of 54 by Kemp last week is just three yards shy of tying the all-time state record of 57 yards by Sean Simoneau of Hays in 1994 & Mike Ross of Blue Valley in 1993.

Kemp has been playing football since the third grade and kicked his first field goal at eight years of age.

The rising sophomore kicking recruit is seeing a lot of Division I interest. He attended Alabama, Arkansas, Mizzou, K-State and Oklahoma kicking campus last summer. He’s also been invited to LSU. All programs mentioned have shown interest in the 2021 recruit.

Kemp is 110% focused on football and kicking as it’s the only sport that he plays at Andover High School. He trains year-round in the weight room, participates in kicking competitions, and also has a Fundraiser for cancer that he does through kicking.

“I have a fundraiser I am doing with my kicking called Kick, It’s on Alex’s Lemonade Stand to raise money for kids with cancer.” Kemp said.

While Kemp is doing big things with kicking, on and off the field, he is also a model student at Andover High School. His favorite subject is Social Studies and he has a perfect 4.0 GPA.

Andover started the season with a loss to Great Bend, but we do know one thing when you’re across the 50 you have an opportunity to score with the sophomore kicking weapon for the Trojans. We caught up with him below in the latest Q&A edition of Faces in Kansas.

This feature is presented by Rogue Fitness and personal trainer Landon Branine of Andover, Kansas. Proud to support David Kemp and Andover Trojan HS football. Visit us online at RoguePersonalTraining.com.

Started playing football in 3rd grade, in the Andover Rec.  My Dad and my uncle both taught me how to kick.

Help my team in the biggest way possible.  Be the difference, contribute with points and field position.  Make at least 15 Field Goals.

Yes, I feel we do have a shot, we are a very young team and we need players to step up and mature.

I am very passionate and committed to what I do.

Every Friday is super hype all day, very pumped atmosphere. Families and kids come out to support and the type of hype that separates football from the other sports.

The team, the family,  and the fun

We have a lot of key players in the sophomore and Junior classes.

Football teaches you more than the sport, it teaches work ethic, commitment, how to bounce back, and the best sport that builds a bond like a family on the field.

No, I focus on kicking only.  In the off season, I train in the gym, pool and on the field to grow and strengthen my trade.

Fun but expectations are high.

We lift in the weight room, we have SPS in the summer (Speed, Power and Strength) we have boot camp, our team football camp, and many team bonding activities.  In the off season, I compete in kicking competitions and camps, continue to train in the gym, pool, and on the field to improve and get better at my trade, kicking.

College’s have invited me to their summer special teams or kicking camps,  Alabama and LSU.  I attended Alabama, Arkansas, Mizzou, K-state and OU camps this past summer.  They have all shown interest in me.

Spend time with my Family and Friends

In 10-years I will be almost 26 years old.  I see my self as a college grad, after successfully  graduating and playing for a  D1 college or university.  I see myself working in a business role for my career.

GPA is 4.0 and my favorite subject is Social Studies

God is my biggest role model I follow him in everything I do. I also look up to my Dad a lot.

I have a fundraiser I am doing with my kicking called Kick – It on Alex’s Lemonade Stand to raise money for kids with cancer.  I kicked my very 1st field goal at age 8. I have a 4.0 GPA.

I choose to put God first, Family, then Football