v Faces in KS: Tyler Kahmann - Sports in Kansas 
Warning: include(../includes/bodytag.php): failed to open stream: No such file or directory in /home/kansass/public_html/ks/news/index.php on line 36

Tyler Kahmann is one of the states best three-sport athletes. (Photo: Laura Nicholas) 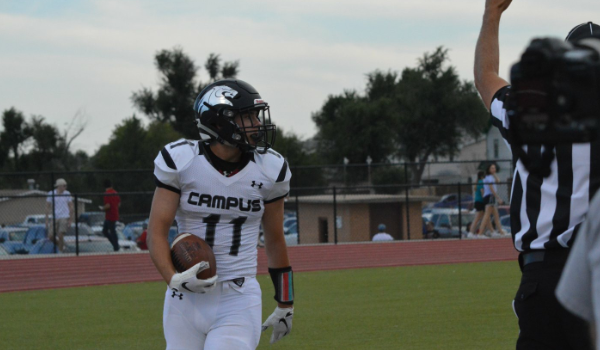 Campus High School, a 6A member located in Haysville outside of Wichita, put themselves on the map last football season with a 5-5 season, including two victories over Hutchinson.

A big part of the resurgence of the program, under head coach Greg Slade, was all-state quarterback and defensive back Federico Harvey Jr., who graduated last May. Of-course Harvey, a 2018 Shrine Bowl participant, received a lot of honors one year ago as he should of, but it was much more than just him that impressed at Campus. It was big-time playmakers like Tyler Kahmann who put himself on the map last season as one of the top receivers in the state.

Kahmann, a 6-foot-3, 205-pound, senior wide receiver and strong safety, had a huge junior year in 2017 which he had 38 receptions for 623 yards with eight touchdowns, earning Sports in Kansas Non-Senior honors. He hasn’t slowed down this year either as he opened up week one with a four-touchdown night in week one win over Dodge City, 47-9, including three scores on offense and a fumble recovery for touchdown on defense. Kahmann had 137 receiving yards in week one.

It doesn’t stop at football either for Kahmann, in fact there is not off-season for the senior who is one of the statest top multiple-sport athletes. He averaged 13 points per game last basketball season, earning Sports in Kansas second team 6A all-state honors. He repeated that feat last spring, earning second team Sports in Kansas All-State baseball in 6A hitting a league leading .457 as a shortstop. He will be a four-year starter at a 6A high school in both basketball and baseball by the time he graduates. There’s not much he can’t do. In fact, Kahmann was potentially going to be the quarterback this year due to the graduation of Harvey Jr., however the arrival of Evan Kruse at quarterback from Wichita South has let Kahmann shine at his receiver position.

Kahmann also has a 4.2 GPA and his favorite subject is math. He hopes to some day be working in the medical field. He is keeping all opportunities open right now and will figure out what sport he wants to play at the next level.

Heights doesn’t stop at Kahmann and Kruse either. Quinton Hicks is one of the states top linebackers and tight who has committed to South Dakota State. Cameron Harvey is also an exciting utility play maker on both sides of the football. Throw in rising recruit Seth Falley, featured this summer on Faces in Kansas, who is one of the states best lineman that has started since his freshman year.

Campus, who has just one playoff win in its school history, could be primed to even improve upon that five-win total from last year. They return seven starts on each side of the football from a solid campaign last season. The Colts had just five wins combined in 2015 and 2016, the freshman and sophomore years of this years 2019 seniors. The Colts do have a battle-tested schedule as always in the tough AVCTL-I with the likes of Derby and Maize in that conference. While Hutchinson may be a bit down in the league, both Salina programs, Central and South, could have made a little improvement from a year ago as well. Newton, who Campus gets this Friday, is also 1-0 to start off the 2018 campaign with a victory over traditional power Buhler who was hit by graduation.

We caught up with the do-it-all multi-sport athlete below in the latest Q&A edition of Faces in Kansas.

This feature is presented by Channel 060, proudly covering and supporting the Campus Colts. Visit our YouTube Page for live-game coverage online here

Chet Kuplen, CEO/Founder of Sports in Kansas, on Kahmann

"No matter what sport we cover over the last year his name keeps popping up. That's when I decided we have to cover this kid on our network on a Faces in Kansas story. He does just about everything. He will have opportunities to play at the next level in all three, so its just whatever he chooses to do. I love to see a big school kid that doesn't specialize. Campus would really be missing out if he decided to focus on one. He's got to be up there with one of the best multi-sport kids in the state. Heck we have two alone in the league with Caleb Grill and Kahmann. Campus certainly has some pieces back that make them an exciting team. I love seeing programs rebuild that haven't had a ton of success. Coach Slade has done nice work here."

I got involved in Youth Football when I was in 2nd Grade. My family has always been involved in football.

Offense: I feel like I am a very tall and athletic receiver. I also have very good hands and a lot of experience.

Defense: Big and athletic. I make plays on the ball and read plays well.

The atmosphere is very good. I feel like we have the best student section around(Screamin’ Stampede). Our seats are packed every home game and our fans travel very good.

Campus has not been known as a “powerhouse” in the past. I feel like we are the most improved team in the area in the past couple of years. We are a very athletic team that has a lot of experience.

I love the Friday night atmosphere. There is nothing like it.

You play a lot of sports, tell us about that?

I also play Basketball and Baseball.

Basketball: Will be a 4 year starter. All league and all state honors sophomore and junior years.

Baseball: Will be a 4 year starter. 1st team all league shortstop and 2nd team all state Shortstop junior year. Lead the AVCTL DIV I in Batting with a .457 Average

I love playing for Coach Slade. He brings a very positive and fun environment to our football team.

We conditioned more then ever this past summer because most of us play both sides of the ball and we knew that coming into the season.

It has always been a dream of mine to get a scholarship to play sports at the next level.

I enjoy hanging out with my friends, playing fortnite, and spending time with my family.

I plan on going into the medical field.

My favorite subject in school is Math, it always came pretty easy to me. My GPA is 4.2.

My parents are my role models. They both played college sports and have helped me and always supported me through sports.

I love to Surf/Wakeboard during the summer.