v Kpreps Helmet Stickers - Week 1 - Sports in Kansas 
Warning: include(../includes/bodytag.php): failed to open stream: No such file or directory in /home/kansass/public_html/ks/news/index.php on line 36 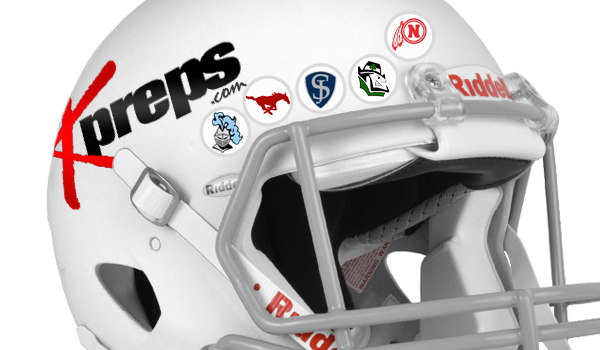 Back to Kpreps this fall, our contributors will hand out helmet stickers to a team or individual that delivered the most important performance of the week in their opinion. Check back each week to see which player or team earned helmet stickers, and follow @Kpreps on Twitter and Facebook to watch as the Kpreps helmet fills up with stickers as the season goes on.

One of the themes of Week 1 of the Kansas high school football season was the number of teams that put an end to long losing streaks. In fact, nine of the 33 teams that entered this season on double-digit losing streaks won their opener last week. My helmet stickers, for Week 1, goes to two schools that ended 20+ game losing streaks.

Southeast-Cherokee stopped a 28-game losing streak with a 20-6 victory over Uniontown. Junior Jakob Tavernaro rushed for 130 yards and a touchdown on 17 carries to lead the Lancers. Bryce Petersen added 50 yards and a score as part of Southeast’s 252-yard rushing output. Senior quarterback Bret Malle also passed for 130 yards.

Southeast, in its first season in the Three Rivers League, had not won since defeating Northeast-Arma, 27-20, back on October 10, 2014.

On Thursday night, Wichita North defeated Wichita South 29-22 to snap a 21-game losing streak. The Redskins took a 21-14 lead in the third quarter as Joe Williams, III broke free for a 98-yard touchdown run. South would answer mid-way through the third quarter and convert a 2-point attempt for a 22-21 lead. But Williams wasn’t done. The senior scored again to give the Redskins a 29-22 lead that they would not relinquish. Williams finished with 28 carries and 300 yards rushing on the night.

Prior to that victory, the Redskins last victory came October 15, 2015 in a 22-5 win over Wichita East. The victory takes Wichita North from the longest losing streak in Class 6A to now tied for the longest win streak – 1 game.

My Week 1 helmet sticker goes to St. James Academy quarterback Jack Moellers. Moellers, on our 25 to Watch QB list, is a rising 2020 prospect for the Thunder. He opened up the 2018 season completing 10 of 15 passes for 221 yards and two touchdowns, while rushing for 117 yards on 11 carries and another score. St. James Academy won its opener 41-20 over Blue Valley Northwest on Friday.

Eisenhower had won a playoff game last year and was considered in the top-10 in preseason Class 5A. It marked the most points Central scored since a 45-18 win versus Newton in the 2015 finale, the last victory before Friday. Last season, the Mustangs opened with two losses by a combined 15 points and then struggled in the last seven weeks with an average margin of loss of 29.3 points.

Junior quarterback Jackson Kavanagh and veteran running back Taylon Peters keyed the offense. Kavanagh passed for 201 yards with two touchdowns against one interception. Peters had 27 carries for 188 yards with three touchdowns. He kicked a 33-yard field goal and three extra points. Peters entered this year with 2,100 career rushing yard and 16 scores, including 981 last year.

Ben Driver broke his jaw and had to miss all of 2017. He had a 47-yard punt return touchdown in his first game back. Defensively, Central held Eisenhower to 245 yards of total offense. Last year, Central permitted 41.4 points a contest.

Chapman senior quarterback Izek Jackson led the Irish to an impressive season-opening 34-18 victory over 2017 Class 3A runner-up Marysville. The 6-foot-5, 185-pound Jackson had a breakout game in rushing for 275 yards and five touchdowns on 26 carries. Chapman rushed for 342 yards in the game while averaging 7.3 yards per carry.