Simmons had five touchdowns in week one for the Panthers. (courtesy photo) 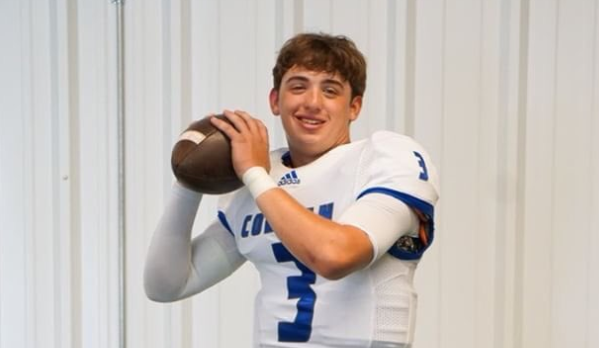 We only had one week of action that fell into the month of August for coverage but it didn't dissapoint and neither did St. Mary's Colgan senior quarterback Cade Simmons. That's why he has earned the Labette Bank Southeast Kansas Area Athlete of the Month for his play over the month of August.

The 6-0, 200-pound, senior, had one of the best nights across the state in week one as he led the Panthers to a dominating 40-6 victory over CNC rival Columbus on Friday night. Simmons passed for 157 yards with two touchdowns and added 209 more on 11 rushes with three touchdowns. Simmons helped quarterback the Pantehrs to a 2-1A state runner up finish last fall. If you watch some of the highlights, Simmons was throwing off defenders in one of his touchdown runs and it was one of the best highlights we saw all last week. Cal Marquardt was Simmons top target with 118 yards recieving and two scores. Defensively the Panthers were led by Marquard's eight tackles as well as Luke Orender also with eight.

Colgan, led by head coach Shawn Seematter, will be one of the 1A teams to watch this year to make another deep run. The Panthers will play Frontenac, last years 4A-II runner-up, this week in another rivalry game. The Panthers are 1-0 against Frontenac under Seematter.

Labette Bank would like to congratulate Cade and the Colgan Panthers on their week one win over Columbus.