v Sports in Kansas: 25 Tight Ends to Watch for 2018 - Sports in Kansas 
Warning: include(../includes/bodytag.php): failed to open stream: No such file or directory in /home/kansass/public_html/ks/news/index.php on line 36

Mason Fairchild is one of the top football players in the state headed into 2018 season. 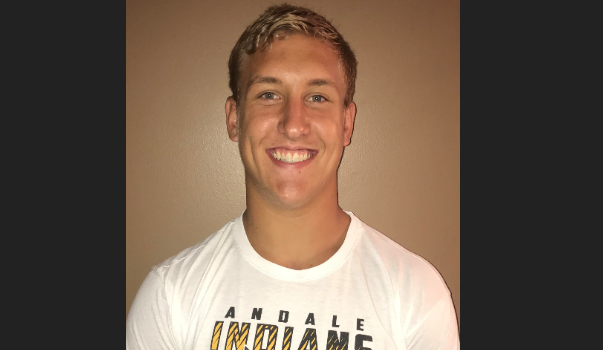 Several TE's return after having big seasons in 2017. Check out who to watch in 2018. This lists main purpose is to represent the entire state from every class. Stay tuned over the next few weeks as we will do this position by position. Chet Kuplen, Managing Partner of Sports in Kansas, and Ben Mitchum, Sports in Kansas contributor, compile lists and evaluate players every year for every position which help compile this finalized list. This is not a recruiting list or prospect list and players are not ranked or in any special order.This list is powered by Rack Performance and Nex-Tech Wireless. Be on the lookout for our postseason honors after the 2018 season on who will be the Top 100 seniors in Kansas and who will make the Sports in Kansas All Non-Senior Team. If you ever have a player that you think we should take a look at be sure to DM @sportsinkansas or sportsinkansas@gmail.com

A physical in-line tight end for the Wildcats, who also was a all-league performer at defensive end this past season.  Within Holton’s run heavy wishbone offense, Aquirre is a big weapon in the run game. Brees is also a big bodied tight end at 6-foot-8 and 210-pounds and is one of the tallest players in the state.

An 3A all-state and all-league performer in the Big Seven last season, look for Baumgartner to become an even bigger weapon this coming fall for the Thunder.

Also Baumgartner is one of the top returning defenders/tacklers for Nemaha Central and only one of two returning upfront.

When it comes to looking like a college tight end getting off the bus, Boyd is your man. Boyd gives the Cowboys a big athletic target and blocker offensively but also a quality defender (71 tackles as a junior).

Boyd was honorable mention all-league as a junior.

One of the more underrated tight ends in the state, Blackwell is a very good blocker but has the athletic ability to be split out on many occasions.

A true all-around end on a very talented veteran line-up.  Definitely a name to keep an eye on as the season unfolds.

5-Star quarterback Graham Mertz may have lost his top two receiving weapons from last season bud does return the next guy in line in Cameron Burt.

Burt has been more of a wide receiver for much of his career but he will be replacing Kansas bound Dylan Freberg at the tight end position this coming season. He had 30 catches for 404 yards in 3 touchdowns last fall.

Arguably the top tight end prospect in Kansas. The University of Kansas verbal, Cundiff is a physical tight end who can play inline or split out at the next level.

He had drawn interest from several other FBS schools including Arizona State, Iowa State, Kansas State and Wisconsin. He had offers from much of the Missouri Valley Conference in FCS.

Hurst is a all-state defender that looks to be much more involved in the Cubs offensive attack this coming fall after playing along the offensive line much of his career.

With the move to tight end, he will likely give possible new quarterback Daegan Goodner (been playing fullback) a legit big receiving option.

One of the top tight end prospects in the whole state, the physical Fairchild has already verbally committed to University of South Dakota over the likes of Kansas and Illinois State.

He excels on both sides of the ball (defensive end) with a ever running high motor. Fairchild and his Indian teammates hope to come out on top this fall in 3A after coming up just short last season in the state title game against Bishop Miege in then 4A-I.

If you’re looking for a really athletic pass catching tight end, look no further than Gant. Although Paola is a run first squad this gives them a big target and option

Gant gives any future college program a bigger receiver in the present but a potential for a dynamic tight end prospect with further strength and conditioning.  Also a top notch baseball player for the Panthers.

Long athletic tight end who can play inline or be split out. Effective blocker in space but also good off the edge defensively.  Just a good all-around athlete for the Thunder.

Accomplished track and field athlete who could push 50 feet in the shot put this coming spring.

Punishing run blocker for the Trailblazers. Gulley is a effective pass catcher but known for his blocking ability. Will be interesting to see how he further develops in head coach Ryan Cornelsen’s Offset I offense.

He provided 11 catches for 79 yards and one touchdown this past season as a junior.

Haney is a good athlete and should be a big target for the Cardinals quarterback Gavin Elston (who missed last season with an injury).

Hayden still has plenty room to fill out his long frame and luckily for him he still has two seasons to play.  As a sophomore, Hayden was already a integral part of the Tigers offense. Definitely a prospect out west to keep an eye on for the coming years.

Hicks is a 1st team all-state performer defensively at linebacker but also a 1st team all-league tight end.  One of the better all-around players in the state.

The South Dakota State verbal commit is a great size/athletic combo with wide receiver Tyler Kahmann offensively for whomever takes over at quarterback this coming fall.

Mitchell is definitely someone to monitor in the coming seasons as the incoming junior had 14 catches for 185 yards and 3 total touchdowns this past season.

Already a quality receiving threat, the more he fills out physically, the more he will rise up the recruiting boards the next two years. He was also an all-state selection in baseball as a sophomore last spring.

Mitchell more known on the defensive side of the ball could be a two-way player if needed for the Cougars this year. He holds an FBS offer from Air Force and is the defending 5A state javelin champion. He’s big and he can move.

Patterson is a big athletic target for the Cardinals.  Gone is his very talented quarterback, Micah Grover but Patterson should continue to be a match-up nightmare for opposing defenses.

Also a top notch track and field athlete.  He had the second best javelin throw in the state last season with a throw of 202-5.

The Wildcats are blessed with a big physical tight end option in Preisner. The to be Junior had 10 catches for 140 yards and 5 touchdowns this past season.

Northern Heights does not return a lot of production offensively, so Preisner may be relied upon heavily.

Richter is one of the bigger playmaking tight end threats returning this fall.  Last season he had 31 catches for 647 yards and 5 touchdowns in Pleasant Ridge’s flexbone offense. He had a school record 211 yard receiving and 3 touchdowns against Jayhawk-Linn.

Richter is just a good all-around athlete in multiple sports for the Rams.

With the loss of Taegan Schoenfeld to graduation (Fort Hays State), the Bears will be looking for players to make up the lost production. One of those players is Schindler, who provided 11 catches for 267 yards and 4 touchdowns this past season in the always tough Mid-East League.

Right up there with Cundiff and Fairchild as arguably the states top tight end.  Schmitz looks the part of a definite FBS/FCS prospect.  He already had good size but plenty of room to fill out his athletic pass catching frame.  He was the 5A discus state champion this past spring with a toss of 165-09.

Steele can play either offensive tackle or tight end and definitely has the size that recruiters are looking for. He is a returning starter on the offense along with six other players for first year head coach Justin Hoover. While we don’t know a lot about him, he certainly passes the eye test on size.

Steinlage will be depended upon heavily with his size and blocking for the Panthers this season. He is one of the biggest players in 1A. Also add in all-state offensive lineman Derek VanDorn who is 6-foot-4 and 280-pounds, then you have a pretty big line for 1A.

Tammen is a hybrid type of tight end/wide receiver but regardless if he is inline or split out, he is Russell quarterback Austin Price’s main pass catching target. After a highly productive junior season, he should excel in Coach Jordan Echer’s new spread option scheme. Much like Price, Tammen is a three year starter for the Broncos.

The Teutons are blessed to have a big pass catching target like Thiessen.  At 6’7” and athletic, he is a match-up nightmare in the 1A classification. If he were to decide to play football at the next level (definite basketball recruit as well), defensive end is very likely his spot but he has also played some right tackle this past season.  Regardless of position or sport, Thiessen is definitely someone to keep your eye on this school year.

The Central Prairie League has not only provided numerous state titles and powerhouse 8-Man programs through the years but also provided a lot of quality players regardless of classification. This coming fall is no different. All four of these kids also are names to keep an eye on the hardwood this winter.

Liebl is one of the better small school basketball players in the state but will give quarterback Myles Menges a big athletic target to replace highly productive Alex Barton (Sterling College basketball) for the Oilers.

Caden is the son of Knights head coach, Doug Oberle. Victoria is always loaded with athletes but one can bet this father will be looking heavily to his son this coming fall for plenty of production. Oberle has one big advantage with the return of multiple year starter in Cooper Windholz at quarterback.

Rios is a big target for the Eagles but also excels on the defensive side of the ball at defensive end.  Rios is one of 7 seniors looking to get Ness City back into the playoffs where they have been a mainstay as of recent.

Whelchel isn’t really a true tight end but they can use him as one because Zane Colson will be the primary ball carrier. There’s a lot you can do with him whether that’s fullback, tailback, receiver or tight end. He’s an athletic freak with a sub 4.5 40 time and a 37-inch vertical.

Wiltse is a big target for quarterback Anton Foust. This past season he had a team high 453 yards receiving and 12 touchdowns for the Cougars who much like the three other CPL tight ends, are looking for deep playoff runs.

Higgason could play some tight end and guard both this year for Otis-Bison a team to watch for in the 8-man ranks. He’s very strong in the weight room with a bench of 310 pounds.

The northwest Kansas product Havlas is already one of the better basketball players in the small classes of the state.  Havlas also excels on the gridiron where he had 11 catches for 159 yards and 2 touchdowns for the Bulldogs this past season.  Quinter looks to lean heavily on him on both sides of the ball this coming fall.

Wiltfong was incoming North Carolina quarterback Jace Ruder’s big receiving target up until he went down to a injury this past season. Wiltfong who already holds an Emporia State offer, still hauled in 17 catches for 239 yards and 3 touchdowns as a junior for the Bluejays.

Other Returnees to Watch: