v Faces in KS: Dylan Downing - Sports in Kansas 
Warning: include(../includes/bodytag.php): failed to open stream: No such file or directory in /home/kansass/public_html/ks/news/index.php on line 36

Dylan Downing is back for 2018. (photo: Courtesy of Bishop Miege Football, Kenneth Daniels) 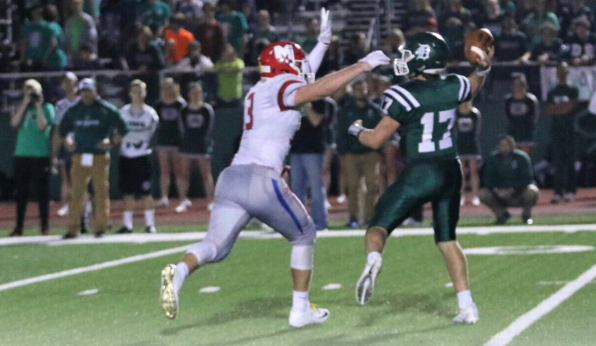 Dylan Downing has been an impact player since he stepped foot into Bishop Miege High School three seasons ago as a freshman. He’s also one of the most physical linebackers in the state of Kansas.

If the name Downing sounds familiar because his older brother, Dawson, was a former multiple time running back all-state pick at Sports in Kansas back in the day. He’s now working his way up the depth chart on the Mizzou football team after earning a scholarship as a walk-on headed into this fall season. Dylan’s father, Ken, now a chiropractor in Westwood, also played at Mizzou, where he was an All-American, before playing professional football with the Saints, Bears, and the CFL. Football is in the Downing family.

“My dad played in the NFL so I am sure he wanted his kids to at least try and play football and for as long as I can remember I have always had a football in my hands or around me.” Downing said.

Much like Dawson was a short-time ago, Dylan is also a player that has been under-recruited in our opinion. The 6’1”, 230-pound, senior, linebacker, was the Sports in Kansas 2017 Non-Senior Defensive Player of the Year after helping lead Miege to another state title last fall. He has been a two-time non-senior all-state pick at Sports in Kansas at the linebacker position. He also serves as the teams punter and kicker. Besides being a little under the radar as a recruit, he does hold a pair of very good offers at prestigious places like Colgate and Cornell at the FCS level.

Downing, who enters his fourth year as a starter this Thursday against 6A state champion Blue Valley North, returns after registering 142 tackles, two interceptions, three forced forced fumbles, three recovered fumbles and one sack in 2017. As a sophomore, he also went over 100 tackles with 102 on the year. He also had a 45.7 punt average as a junior last year, however Miege isn’t a team that punts too often, but when they do they have a weapon. As a freshman he was in on 28 tackles to go along with an interception.

It’s also likely if Downing played on any other team in the state, he may be an all-state caliber fullback or running back. However, at a program loaded like Miege, who is 50-2 over the last four years under head coach Jon Holmes with four consecutive state titles, there is depth all over the place and playing both ways is not common. Miege features Brison Cobbins, one of the best backs in Kansas on the offense, who has started since his freshman year. Daniel Jackson also returns and is the top receiver in Kansas.

For now, Downing is ready to help lead his team to another state title and enjoy one last season as a Stag. Miege opens up the 2018 campaign at Blue Valley North, last years 6A champion, on Thursday. BV North quarterback Graham Mertz, perhaps the best QB recruit in KS history, is a former classmate of Downing as the two will faceoff one last time in high school. Last season Miege beat the Mustangs, 33-14.

We caught up with the outstanding senior linebacker below in the latest Q&A edition of Faces in Kansas.

Chet Kuplen, CEO/Founder of Sports in Kansas, on Downing

"He's one of the best linebackers we've covered over the last couple of seasons. He's a very physical football player. I am expecting another huge year for him and of-course for the Stags to five-peat in 4A (4A-I). Much like his brother Dawson, that we told everyone to recruit a few short season ago, its the same thing with Dylan. Maybe it's because he doesnt have 4.5 speed and isn't 6'3, I dont know. We do know that he's a dominating player in the best league in the state on the best team, so that has to say something. He has some good FCS opportunities right now but I wouldn't be surprised if more come in and offer this season. Dylan could proably be a Divsion I punter if he wanted but he obviously likes to hit people. It seemed like yesterday I was reading about him winning the National Punt Pass and Kick competition as a junior high kid, now he's about in college. It's crazy how time flies."

My dad played in the NFL so I am sure he wanted his kids to at least try and play football and for as long as I can remember I have always had a football in my hands or around me.

My individual goals for this season is 160 total tackles, 20 TFL’s, 5 INT’s, and average close to 50 yards a punt. My team goals for this year is to help the team have another undefeated season and come out with my fourth state championship but the fifth in a row total.

Yes we have a very good shot at making a run this year. We lost a lot of key pieces from our team last year but we have plenty of people that will step up to fill those rolls and provide a spark for our team.

I feel like my physicality is what makes me such a force as a player. Against the run you have to be physical taking on the lead blockers and the lineman coming after you, and if you are not physical you will get ran over all day.

The atmosphere is amazing. A lot of students come out and support and get loud during the game which is always amazing to see. The thing that I feel like we get more than other schools is all of the alumni that come back to watch us play and some talk to us before the games. They all say enjoy these nights we have as a team because Miege use to not be that good so go and enjoy the environment and have fun with each other.

People should come to one of our games because we have a very fast and high powered offense that keeps coming at you and can put up points in a hurry. Our defense is a very physical and old school type of defense so for the people that do not like how the game is changing and like the old way of football they can come watch our defense.

You can pick about any other player on our football team to be a key player. You can not key in on one guy because if you do someone else will end up hurting you. We are a very fast and athletic team with a bunch of playmakers that need to be accounted for.

I play basketball and throw the javelin. Basketball I suited up for varsity this season and we won the third straight state title in that. Track I placed 6th in the 4A Javelin.

Playing for Coach Holmes is really fun. He is just a big kid and loves to have fun and he has a competitive nature as well which is nice. He is really friendly and upbeat but will jump on you when he needs too.

We lifted and ran almost everyday this summer as well as learning plays and watching film as a team so people know their assignments and roles for the season.

Interest I am seeing right now is most of the Missouri Valley Conference, Missouri, Kansas, and Kansas State. My plans are to play at a big D1 school where I feel like I will be able to compete to the best of my ability.

My favorite thing to do is hang out with friend. Since I am so busy spending time with them is always nice and having a good laugh you always need.

My favorite subject in school is math. I am a good student that likes to stay very organized. I had a 3.7 GPA.

My role model is my brother, Dawson, because he always gives it his all in whatever he is doing no matter what. Just seeing him do that and seeing what he has accomplished pushes me to do that and exceed what he has done.

My favorite place to eat is Gojo’s Japanese Steakhouse. You get a LOT of food that is very well and everyone that work there is very friendly.

Some people may not know that I sleep all the time when i get the chance. I could sleep anywhere at anytime.