v Sports in Kansas: Football Games to Watch - Week One - Sports in Kansas 
Warning: include(../includes/bodytag.php): failed to open stream: No such file or directory in /home/kansass/public_html/ks/news/index.php on line 36

Sports in Kansas: Football Games to Watch - Week One 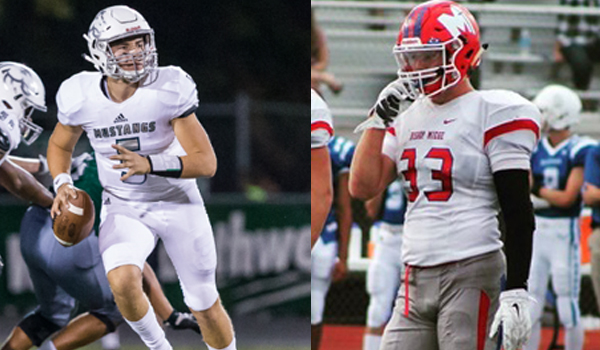 A new feature in 2018 presented by Nex-Tech Wireless, Labette Bank, & Craw-Kan will be one game to watch per classification. Sean Boston of Sports in Kansas will break down eight matchups across the state over the regular season in 2018.

Games to Watch for Week 1. One game per classification

What better way to kick off the 2018 football season than two defending state champs battling it out under the lights of the Blue Valley District Switzer Activity Complex. Bishop Miege is 50-2 in their last four seasons under Jon Holmes and have won four straight 4A-I titles, so who will dethrone them? Blue Valley North enters the season after their first state title in program history, while Miege picked up their fourth straight championship. The Mustangs will turn to QB and Wisconsin commit, Graham Mertz, a former backup at Miege, to lead the air raided offensive unit. Mertz passed for a state-best 3,684 yards (283.4 yds/game) and 45 touchdowns. Mertz did lose his top two receiving targets in Dylan Freberg and Nigel Roberts. Those two made up 63% of Mertz’s passing yardage last fall. The Stags’ offense will have to replace all-state QB, Carter Putz who threw for 2,844 yards and is now playing baseball at Notre Dame. The guy that will fill the shoes of Putz is likely Sam Pedrotti and maybe TyQuez Agnew-Whitten, who figures to play multiple spots on both sides.. Although he’ll have big shoes to fill, the Stags will have a ton of speed at every position on the field. Whoever decides to hand off to RB Brison Cobbins (1,294 rushing yds last year) or lob it up to WR Daniel Jackson (1,270 receiving yds last year), the Stags will have plenty of weapons. Dylan Downing also returns on the defensive side of the ball where he was the Sports in Kansas Non-Senior DPOY last season, as Mertz was the Sports in Kansas Non-Senior OPOY. The two were former classmates at Miege. So, if you want to see a firework show to start the 2018 season, grab your popcorn and get ready for a bang when the clock hits 7 PM. The Mustangs will try to end Miege’s 25-game winning streak, but can they?

The last time these two teams met was exactly one year ago to the day and it was a good one. Bishop Carroll outslugged Northwest, 40-35 on the Grizzlies’ home turf, but this year could be different. The Golden Eagles are the defending state champs in 5A, but they lost some key pieces to that team that went 12-1. It’ll all start with the signal caller since all-state QB Braden Howell (3,086 passing yds in 2017) graduated, they’ll turn to senior QB Cade Becker, who played mainly WR last season until a season-ending injury in week 8 against Kapaun. The Golden Eagles will line up senior Jackson Nichols at RB, a guy that got a lot of carries last season due to another injury on the Carroll offense. KU commit Clay Cundiff, one of the top TE’s in the state will be a tough matchup for anyone all season long and will make an impact with his catching and blocking. Carroll’s offense will go up against one of the scariest defenses in the state, led by Oklahoma commit, Marcus Hicks at DE and LB Josh Carter, both of those guys will cause a lot of changes at the line of scrimmage this year. The Grizzlies offense will have a new signal caller, so look for them to keep it on the ground a lot unlike years past and hand off to Iowa State commit, Breece Hall. Hall is ranked as the top player in the state by many recruiting outlets. We could see a lot of points put up on the scoreboard again in this one, so it’s definitely one to keep an eye on to start the season. Also, with Northwest dropping to class 5A, we could see this matchup again later in the playoffs.

Two of the best teams in the Southeast Kansas area will meet for the first time on the gridiron since the season opener in 2013, a year that Pittsburg beat Labette Co., 42-2. But, the times have changed and the Grizzlies have turned the program around in a matter of a few short years. After a 7-3 record in 2005, the Grizzlies went 11 straight seasons without a winning record, until last fall when they finished 9-2 and lost to eventual state champ, Miege in the second round of the 4A-I playoffs. Labette Co. will turn to senior QB and Iowa State commit Easton Dean (6-7 220) to lead the charge once again. Dean threw for 2,028 yards and 22 TD’s last season and has one of the top arms in the state at the QB position and can also get the job done with his legs. Especially after losing their top two rushing attacks from last year, they’ll go to senior WR Kale Irwin (40 catches, 462 yds last season) a lot downfield. Pittsburg will have a new QB at the helm, still being decided in a competition or could go with a two QB-system, but will return a key WR in senior Dylan White (33 catches, 690 yds, 10 TD’s). This game has a lot of hype going into the season, as it should. We’ll see if the Purple Dragons can contain Dean, or if he’ll use his size and athleticism to his advantage.

Fresh off a 3A state championship, the Sabetha Bluejays will welcome the Thunder of Nemaha Central to town for a big showdown up in northeast Kansas. Coincidentally, the Bluejays only loss last season came to the Thunder in Seneca on Oct. 13. After that defeat, Sabetha reeled off seven straight wins and brought home the plaque back to Bluejay country. The Bluejays will have RB Joe Gruber back to lead the offense on the ground after rushing for 1,213 yards last fall. Nemaha Central will drop from 3A to 2A this season and will be one of the favorites in the class. This first game will be a big test for the Thunder, as they’ll have some holes to fill from last year’s squad. The Thunder will enter this game on a 29-game regular season winning streak, but this time without all-state QB/DB Mitchell Henry, who accounted for more than 2,000 yards of total offense and 36 TD’s. Nemaha Central will have to replace it’s whole offensive line and QB, but does return it’s two leading rushers behind Henry. This will be a big test for the Thunder on the road against their arch rival and a chance for Sabetha to keep their winning streak alive from last year’s championship run. Two streaks are alive, but only one will go on after the clock hits triple 0’s in Sabetha.

If you want to see some hard hitting football, then you’ll want to be in Hoisington on Friday night. The game will feature probably the two best players in the Central Kansas League in QB Travis Theis of Pratt (4,136 career rushing yds), who will make the transition from RB to QB and LB Wyatt Pedigo (129 career tackles) of Hoisington. Those two will pop pads plenty of times on Friday night, but will it be the elusive speed of Theis, or the physicality of Pedigo that will win the battle? Hoisington has been really good the past few seasons and will return at least five starters on each side of the football this season. Pratt, on the other hand will have nine offensive and seven defensive starters back from a team that went 7-2 last season. The Greenbacks will stick with their flexbone offense under Jamie Cruce, so it’ll be interesting to see if Theis will get as many carries, now that he’s the starting QB. This game right out of the gate in the CKL will be a fun one to watch.

This game will feature maybe the top quarterback in 1A, Lane Whisennand of Elkhart. The senior was an all-state selection last season after throwing for 1,231 yards and 13 TD’s. He also is a big threat with his legs, as he set school record with 2,054 yards on the ground and 28 TD’s. He’ll have his top two WR targets back from a team that went 8-3 last season. Javier Gomez and Elian Prieto combined for 34 catches for 881 yards and 10 TD’s last fall for the Wildcats. They’re coming into this season after their best record in program history and will have their hands full here in week 1. Cimarron will be one of the top teams in 2A entering this season and finished 7-3 last year. Although the Bluejays lost three players who were 4-year starters, they always seem to reload in western Kansas. Tate Seabolt will lead the rushing attack for Cimarron as a sophomore after running for 418 yards and 2 TD’s last year on 66 carries. The Bluejays will have QB Dylan Harrison back after to lead the double wing offense. This should be an interesting game out in western Kansas, as Cimarron tries to replace some key starters and Elkhart will look to keep their recent success alive with some key returners.

Two of the best programs in all of the 8-Man ranks will battle it out in week 1. Victoria started the 2017 season 3-0 before a loss to Otis-Bison in week 4, a game that went down to the wire and saw the Cougars prevail 22-20. When these two teams have met over the years the games have been decided by a few points, or 40+ points. Otis-Bison will return their QB from a year ago, Anton Foust, a big key to the Cougars’ 10-2 record in 2017. Foust threw for 883 yards, 20 TD’s and just 2 INT’s in his first year as a QB. He also rushed for 1,171 yards and 20 scores, so watch for him to be a big factor in this game and all season long in 8-Man II. O-B will also have Foust’s top WR target, Maitland Wiltse back after a year where he hauled in 12 receiving TD’s. Victoria will have to contain this high-powered Cougars offense, but will have to do so with some new faces. The Knights return just three starters on the defensive side of the ball, so O-B may try and test this inexperienced Victoria defense early in the first quarter on Friday night. The Knights will return their starting QB from a year ago, Cooper Windholz, a second-year starting QB.

This will be a rematch of a week 8 matchup from last season that saw Hodgeman Co. destroy Dighton, 46-6. Hodgeman Co. would go on and finish runner-up in 8-Man II after losing to Hanover, 54-48 in the championship game. Dighton is hoping to improve on last year’s record, even though they went 7-2, they still missed the playoffs since their district was so tough. The Hornets return many of their key players from a season ago, including QB Blair Hoffman, a guy that threw for 683 yards and 9 TD’s last season. He made an even bigger impact with his legs, rushing for 1,035 yards and 21 TD’s. Dalton Hoffman, will be back at RB after rushing for 531 yards and 7 TD’s a year ago. The Hornets will be replacing some key pieces on the offensive line, but if they can provide time and room for either Hoffman to run, then they’ll be fine. Hodgeman Co. on the other hand will be playing in 8-Man I this season. The Longhorns will have to replace four-year starter and all-state QB, Jacob Salmans. They’ll do that with his younger brother, Isaac. The third brother, Eli will be the top RB for the Longhorns and is coming off of a season in which he rushed for 1,460 yards and 24 TD’s. It’s safe to say that the Longhorns will have some major weapons returning in 2018. This will be a fun one to watch on Friday in Dighton.