v Faces in KS: Jared Casey - Sports in Kansas 
Warning: include(../includes/bodytag.php): failed to open stream: No such file or directory in /home/kansass/public_html/ks/news/index.php on line 36

Jared Casey of Plainville is one of the top returning athletes in 2020. (photo: Cheryl Copeland) 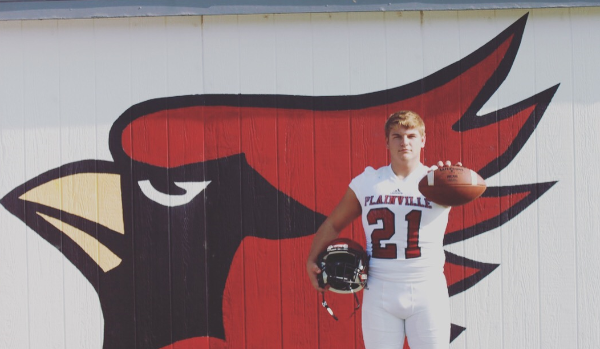 Plainville High School junior Jared Casey put himself on the map as a sophomore last fall earning all-state honors in 2A. He now returns for his junior season where his team and him move to the new 1A, where he should be one of the top players in the classification.

“I’ve been involved with sports from my brothers, Justin and Andrew, then I started out with flag football then Pop Warner and it has been my favorite sport to play.” Casey said.

The thing about Casey is he’s not just a football player. He was one of the state’s best sophomore basketball players in 2A last season. The 6-foot 220-pound junior averaged 16.5 points per game , 7.8 rebounds per game, three steals and three assists per game. Then in track and field, he was one of the top throwers in the state as a sophomore with a shot put throw of 54-feet, taking third place in 2A. There’s not much the 2020 product out of Plainville cant do.

Casey is also a perfect 4.0 student and wants to play linebacker in college at the next level after earning all-state honors last season as a sophomore. He had 105 tackles last season and can also play defensive line If needed. On offense, he played offensive line and this year he will be a running back from Plainville. He is a very versatile prospect at the next level but his best shot with size will be at linebacker. He also gets the opportunity to play top notch small school competition in the very battle tested MCL that features the likes of Norton, Smith Center, Phillipsburg, all schools that had players with Division I opportunities last season.

Right now Casey is focused on football and getting his team on a run in 1A. Plainville, who was the 2-1A runner-up, when Casey was a freshman returns just three starters on offense and three starters on defense for head coach Grant Stephenson’s squad after losing players like Hayden Gillum to graduation and Kansas State. Casey also gets the opportunity to play for his older brother, Justin, who is an assistant coach on the Plainville football team.

Find out what makes this 2020 multiple-sport athlete special as we caught up with him in the latest Q&A edition of Faces in Kansas.

Chet Kuplen, Founder/CEO of Sports in Kansas, on Casey

"I don't know too many sophomores that had the year that he did last year in three-sports. The future is bright for him. He's good at everything he does and he's very versatile. If he were a few inches taller I would have no doubt he would have FBS offers right now in football. He's a very explosive athlete and I look for him to be one of the top small school athletes in the entire state over the next couple of seasons. He's 6'0 and 210 pounds when he was throwing a shot put 54 feet as a sophomore, I haven't seen that often. Now he's up to about 220 pounds and he moves well on the basketball court and really is a complete player as you can tell by his stat column. He's a tough, hard-nosed kid. I expect a huge year. The MCL isn't your average 3A/2A/1A league, he gets to see very good competition and guys that have gotten D1 offers."

My brothers, Justin and Andrew, for sure got me involved. I started out with flag football and then pop warner and it was just my favorite sport to play overall.

My goals this season are to be a great leader for our team, to win the district, make the playoffs and make a great run into them, and to be the best player I can be.

No doubt. It really is all a mental thing for our team. We have some low numbers this year with only 22 players out and that will be tough for sure, but with our best 11 players, we will go hard on every down and just be us.

I am a force as a player because I can and will do whatever coach needs me to do for the team to be successful. I am loud on the field lining players up and shouting out the defense. I go 100 percent every down because each snap matters and that one snap can be the play that changes the whole game.

In junior high, you have the 50 people in the stands and just a clap here and there as your team scores and the game gets over before dark. The Friday Night Lights as a high school player is much different. Plainville is no doubt a football town. Almost every single person comes out to support the team whether we play at home or on the road. The atmosphere is outstanding and our fans are loud and for sure the best fans in the area.

Our team is once again low on numbers this season, but we will bring the best we have to offer each game to win. We are very classy players and will do whatever it takes to get it done.

Other key players on our team include Jordan Finnesy, Ryan Junkermeier, and Tanner Copeland. Jordan Finnesy is the quarterback/safety for our team. He may be one of the quickest guys I know and brings everything he has to offer to the game. Ryan Junkermeier plays both offensive and defensive line and is the leader in the trenches. He is a big force in the middle at 6’ 3”, 225 lbs. Tanner Copeland is a wide receiver, cornerback, and kicker for our team. He may also be one of the best kickers in the state. There is no doubt all of these guys are leaders on our team and big forces in the class 1a division.

I also play basketball and throw in track and field. The last few years in basketball we have done well. My freshman year, we came up short of making state losing in the semifinals of sub-state. Last year however, we made it to state and lost in the first round game to Pittsburg Colgan. In track and field, I throw shot put, discus, and javelin. My best event is shot put with my personal record being 54 feet. I did not make it to state in any events my freshman year, but I placed third in the 2018 State Track Meet in shot put.

Coach Grant Stephenson may be the best coach I have ever played for. The way he runs practice, and prepares us for the next opponent is unreal. He is a great guy and just so humbling. It is an honor to play for him.

We definitely upped the workouts that we did with them being more reps and more time. We plan to build up stamina and energy to play the whole 48 minutes and out work the other team in the fourth quarter, even with just 22 players.

Many places interest me to go to college. I want to play college football and play linebacker, but I am unsure of my interests of schools right now.

I like to hang out with my friends and family and do activities such as fishing, swimming, playing Madden, NBA, and Fortnite, and going bowling or to the movies.

I see myself playing in the NFL, having a beautiful wife and two kids.

My favorite subject in school would have to be weight lifting/ P.E. I enjoy going into class, paying attention, getting my work done, and turning it in on time. My GPA is a 4.0.

My role model would definitely have to be LeBron James.

The Golden Q in Hays is the spot for sure.

When I was in middle school, I was playing tag and while running away from the tagger, I ran near a pole and sliced my head open on a metal electric box having to get 9 staples.

My brother, Justin Casey, is an assistant coach for our football team.