v Faces in KS: Alex Totta - Sports in Kansas 
Warning: include(../includes/bodytag.php): failed to open stream: No such file or directory in /home/kansass/public_html/ks/news/index.php on line 36 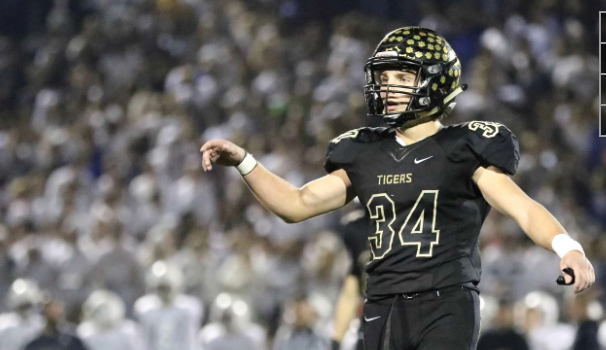 When he was a youngster, Blue Valley’s Alex Totta always dressed up as a solider at Halloween. Totta’s longtime career goal is to enter the military.

Totta, a rare three-sport all-state player, has completed his application at the Naval Academy. He has received interest from the Merchant Marines’ football coach, a Division III program and one of the country’s four major service academies, along with Air Force, Army and Navy.

Totta, 32-7 and the third place finisher at 160 pounds at Class 6A last winter, has talked to the head wrestling coach at Virginia Military Institute. He has an official visit scheduled for September.

Totta is a 4.0 student who loves math and calculus. He has never had a B. Totta will take AP calculus this year and would like a degree in mechanical engineering.

“And also I think part of it is, it does come from within me, because I know I am motivated to do well not only in sports but in school,” he added. “Because school can get you to pretty much anywhere you want in life.”

Totta’s significant interest is naval special warfare, and he would love to have a job in special operations.

His role model is Erik Kristensen, played by well-known actor Eric Bana in the movie Lone Survivor. Kristensen died trying to rescue his fellow Navy SEALs in the Operation Red Wings disaster in Afghanistan. Totta learned about Kristensen in his trip to Navy this summer.

“They told us a story about him and how he gave his life, and that really clicked with me,’” Totta said.

“We always just competed at everything,” he said.

Totta, listed at 5-foot-10 and 180 pounds, isn’t the typical middle linebacker size. However, he was one of the state’s leading tacklers for the 8-4 Tigers under new coach Allen Terrell.

“I am like the toughest guy out there, and so they put me in the middle linebacker spot,” he said.

In the 6A semifinals, Blue Valley lost to Blue Valley North and quarterback Graham Mertz – one of the nation’s top signal callers – 44-37 in double overtime.

Longtime Blue Valley coach Eric Driskell passed away shortly before the season started. Terrell, an assistant since 2012, took over. BV opened the season with a 55-10 loss to Bishop Miege before three straight victories, including a 34-33 regular season win versus BVN, the eventual champions.

“I think coach Driskell would have been proud of the way that our team came together and made a good run,” Totta said.

“We don’t care about wins and losses but who is playing in November for the state title, that’s how we always go about it,” he said. “From January sunrises to November sunsets, is what we strive for.”

Totta finished with 143 stops and seven tackles for loss, leading Blue Valley in both categories. He paced 6A in stops and is top-five among returners for 2018, according to Sports In Kansas research.

In a rarity among large school players, Totta started both ways and led the Tigers with 145 carries for 778 yards and nine scores. He also hauled in 18 catches for 197 yards and a pair of touchdowns.

As a sophomore, he saw limited time on defense with 16 tackles, though split carries offensively with 54 rushes for 398 yards and six TDs. After the ’16 season, the coaching staff told Totta he would likely need to step on defense last fall.

“That was something I was really excited about because me being really competitive, I just love playing the game and getting out there,” Totta said.

Totta said he “wasn’t quite prepared” conditioning-wise for the season opener last year. He has focused more on conditioning this summer. In the first week of August, Totta maxed out and lifted 455 on squat, 285 on bench and 275 on hang clean. During the game weeks, Totta said hydration is the “biggest thing.”

He grew stronger as the 2017 season progressed and had his four best rushing performances in the last month. Tackles-wise, Totta recorded double-digit stops in the last seven contests and eight of the final nine.

After the all-state wrestling season, Totta helped BV win its second straight baseball championship in dramatic fashion with a 1-0 victory against Blue Valley Northwest. Totta had barely played third base prior to the state tournament.

In the top of the seventh, Totta threw out the tying run at home to keep the one-run margin. With a runner on third and one out, Totta fielded a ball hit hard to his left, flipped his hips and threw home.

“I knew that those were the big plays that really when it comes down to it, you’ve got to make,” Totta said. “And we talked about playing loose on the field, and before that play, I was thinking, bottom of the seventh, runner on third, if it’s hit to me, I have got to make a play, and I did.”

This fall, BV is again on the 6A short list, including a Kansas Pregame magazine preseason No. 2 ranking behind Derby and ahead of Lawrence Free State.

Last year, the Tigers finished seventh in 6A in scoring offense at 37.3 points per contest in highly challenging Eastern Kansas League. BV was No. 14 in the 32-team classification with 24.4 points permitted.

The Tigers played two quarterbacks significant time in 2017, and senior Walker Kinney returns. He completed 50 of 119 passes for 1,071 yards with a 12/4 TD/INT ratio. Defensively, two of the top-four and three of the top-six tacklers are back.

“He is going to do really well for us and for our season,” Totta said of Kinney. “We at Blue Valley, we don’t really expect anything less than a state championship, so that’s what we always are striving for.”

Chet Kuplen, Managing Partner/Founder of Sports in Kansas, on Totta

"He's tough as nails and makes big plays on both sides of the football in the best league in the state. He's one of those kids that is a competitor and always gets his job done and is a three-sport all-state athlete. While he may not pass the eye test for recruiters, someone is gaining a valuable human being on whoever lands him in an academy or college. Connor did a great job with this piece on Alex and it sounds like he is wise beyond his years. He's much more than a football player and that's why pieces like this are nice to show what all he does off the field and what he eventually wants to do. I only knew of him as an athlete before this but now know much more about him and can say truly say he is one of the more interesting subjects we've covered over the years. I expect Blue Valley to have a solid season with what they have returning in Totta, Olson, Kinney and company. The program here is the model program in Kansas, whether that's been Rampy, Driskell or Terrell. They have so much tradition it's incredible. While it may be just outside the city, it still has that feel that you get in small town Kansas. It's awesome. There are few 6A/5A programs that have that and they are one of them."

Special thanks to the Blue Valley Touchdown Club for powering coverage with Sports in Kansas over the last several seasons.

“Just competiveness that I grew up with. My dad played football at Mizzou, and having an older brother, my brother AJ who went through Blue Valley and we always just competed at everything.”

“We don’t care about wins and losses but who is playing in November for the state title, that’s how we always go about it. From January sunrises to November sunsets, is what we strive for.”

“I am like the toughest guy out there, and so they put me in the middle linebacker spot.”

“We are a tight-knit group, and like a family, the whole community is, and I think we really saw that when coach (Eric) Driskell passed away everyone came together and made us stronger. The fans every Friday night are always out there at 5 o’clock starting tailgaiting, everyone in the whole town comes and watches the games.

“You see the crowd go crazy, and it really pumps you up for the game, and you just know that you are just doing it for all the guys that have been on the field before you.”

“Everyone that we have is going to be a key important player, even if their name hasn’t been big at all. I think that everyone that we have is going to have to play a big role in our success, so we don’t have those few standout guys that have to be key important players. I think everyone has to be a standout player for us, so we can accomplish our goals of being 6A state champs.”

“Playing both of the sides of the ball is definitely something I love doing.”

“He wants us playing for each other.”

“At Blue Valley, we don’t really expect anything less than a state championship, so that’s what we always are striving for.”

“What I want to do is go to a service academy, and serve our country, so I have been working on that, and I have actually finished my application for the Naval Academy.”

“Sports take up a lot of my time.” Fortnite, I really enjoy hunting, playing basketball outside with my friends a lot.

“I want to go into a service academy and serve our country. When I tell people that, they are just like, they are really impressed that that’s what I want to do, and they have a lot of respect for it, so that’s probably something that a lot of people don’t know about me.”