v Faces in KS: Jack Caudle - Sports in Kansas 
Warning: include(../includes/bodytag.php): failed to open stream: No such file or directory in /home/kansass/public_html/ks/news/index.php on line 36 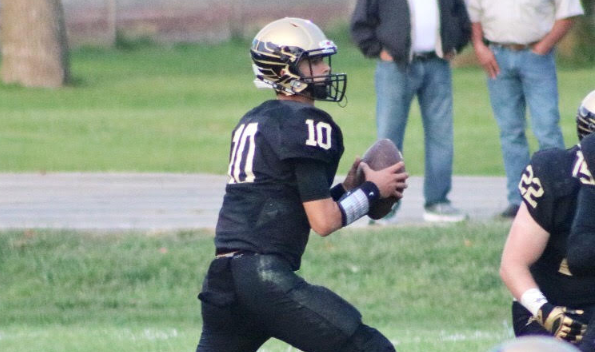 Maur Hill–Mount Academy’s Jack Caudle is one of the top junior quarterbacks returning in the state of Kansas. The 6’3” 195-pound lef hander out of Atchison, Kansas is entering his third year as a starter for MHMA.

Caudle, who also doubles as a safety, helped his team to a 7-3 record last year under head coach Jermaine Monroe. He passed for 1,701 yards with 28 touchdowns on the way to earning honorable mention all-state honors. He also passed for 1,535 yards as a freshman with 24 touchdowns.  He has 52 touchdowns with two remaining seasons, a little off the pace of the Kansas State record set last year of 124 by Carter Putz (Miege) in a career.

Caudle has the ability to extend plays with his legs and a big-time arm. He also has more experience than probably just about any junior in the state at the quarterback position. Also has the ideal size.

If that name sounds familiar to Kansas high school football fans it should. His father, Todd Caudle, was a Top 11 selection for Midway-Denton in the 1980s. Being a Top 11 selection from an 8-man high school is vey rare. He went on to sign with Air Force and then played at Kansas from 1990-1992. Midway-Denton is no longer a school and now consolidated with Highland to form Doniphan West High School. Midway-Denton was a dynasty winning seven state titles in the 1980s in the 8-man ranks and one final one in 2000, giving them eight all-time before the school closed, under Mark Juhl and Mark Martin.

“I grew up playing and watching football with my brothers. It’s always been the sport that my family enjoys the most.” Caudle said.

Now its time for Caudle to make a name for himself over the next couple of seasons. Maur Hill-Mount Academy returns four starters on each side of the football.

“We have good talent on both sides of the ball and we’ve got some new stuff we’re putting in the playbook, so it should be a good year.” Caudle said.

Maur Hill hasn't had a ton of success in football at the statewide level since 1992 when they won it all, also the last time for a playoff win and they also have a state title in 1979. Caudle will look to change that over the next couple of seasons. Maur Hill has however been successful recently in getting to the 3A playoffs with four consecutive appearances to the first round. Now Maur Hill goes to 2A and will have a district they will have a shot at with the favorite being Nemaha Central. We caught up with the rising junior quarterback below in the latest Q&A edition of Faces in Kansas below.

Chet Kuplen, Managing Partner/Founder of Sports in Kansas, on Caudle

"He's a big lefty quarterback, which is rare to see sometimes. I really think he has an opportunity to play at the next level. What level that will be will all be up to him. He's very patient, has a very nice ball and extends plays. If he played in a bigger school or league, its likely you would be hearing about him all the time. Maur Hill has had some nice players recently, its just been a gauntlet for anyone to get through 3A and get past the Silver Lake's or Rossville's of the world the last several years. They've had Harry Trotter (Louisville), Cole Harris (Emporia St.), who did a great job as a late add to the Shrine Bowl, and Jack's older brother, Nick, a walk-on at Kansas. I expect a big year for Jack and for many colleges to start paying attention to the 2020 QB."

I think so, we have good talent on both sides of the ball and we’ve got some new stuff we’re putting in the playbook so it should be a good year.

Being able to make a number of different throws on the field as well as extending plays.

It’s great, there’s nothing like Friday night football underneath the lights with everyone from school being there as well as your family.

We’ve got guys that can make big plays, since I’ve been only on the offensive side of the ball the past 2 years, I say our offense is really fun to watch.

I really like the team part of it, I don’t think any sport really brings you any closer to the people you share the field with. I like the position of quarterback because it requires physical and mental toughness as well being prepared and being smart.

I also play basketball, we had a really good team this year. We got to state and got 4th. We expect to have another good team this next season and make it back and do a lot better in Hutchison.

Coach Monroe is a really energetic person that is just as passionate about football as I am. It’s a really a good feeling knowing your coach puts as much time and effort as he does into the team. It also goes further than the field with him, he wants you to be better as a person too.

We spent time in the weight room and participated in a couple of team camps as well as a 7 on 7 league at MO-West. Also the skill guys have been hitting the field as much as possible, getting down our timing and making our routes look good.

A couple of D1 schools have reached out to me or my Coach, as well as D2 and NAIA. Playing in the Big 12 is the goal for me right now.

Hanging out with friends and family

With a college degree and a job I enjoy hopefully.

My Dad first, and then Carson Wentz.

My family loves dogs, we have 3 labs at home.

Before high school I used to throw the javelin and won the AAU Junior Olympics 2 years in a row and hold a record.