Corby Nisly is one of the top players in 3A. (Photo: Breann Rogers photography) 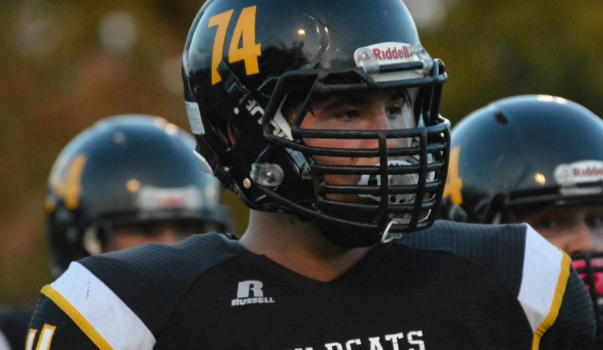 Haven High School senior lineman Corby Nisly is one of the top returning lineman in 3A this season. He also features legit size that college recruiters love at 6'4" and 291-pounds. He is primed for a big senior season for the Wildcats.

The lineman knows he needs to get sronger to play at the next level but he's one of the toughest players in the state. In fact, last season against Halstead, he knocked his front tooth into his nasal cavity in the first quarter. Nisly, bleeding everywhere, came out to get the blood cleaned up and went back in the next series. He truly loves the game.

"I wanted to get back in there and play. That's been over 10 months ago and I am still working on getting it back to normal." Nisly said.

He will look to continue that toughness in 2018 with his team who struggled a year ago at 2-7. However Haven does return six defensive starters although just four on the offensive side of the ball. Nisly was named a Sports in Kansas 25 Lineman to Watch for 2018.

Nisly also gets it done in the classroom, where his favorite subject is Math, as he holds a 3.5 GPA. Part of his plan right now is to get stronger in the weight room over the next year as he plans to play college football.

We caught up with the senior lineman on the rise in the latest Q&A edition of Faces in Kansas.

This feature is presented by Kraft Electric, proud to support Corby Nisly and the Haven Wildcats.

Chet Kuplen, Managing Partner of Sports in Kansas, on Nisly

"I am interested to see more of him this fall. He definitley has the size to play at the next level. He gets off the ball so fast it almost looks like he jumps offsides in some plays. He's very impressive, even if he is going against guys quite smaller. His HUDL video had only 97 views when we first checked him out, what that means is not many if any know about him yet. Once we put some stuff out on him including this feature, that will change. If he continues to play like he did last year, he will be one of the best lineman in 3A this season, there's no question."

I got involved in football at an early age. My 3rd grade year my dad wanted to sign me up for football and I began playing. I fell in love with it and have been playing ever since.

My goals this season are to better my team and leave a new standard for Haven High Football.

Yes. If we pull together as one unit and put together a full game of football our team has a shot.

My work ethic. I say this because I will always give everything I have to out work my opponent.

Its great. Our schools football past hasn’t been the most exciting in the past few years and we still get love and support from the community. Its great to hear the student section get going after a big play.

Come to our games because as we might not be the biggest, strongest, or even best team playing. We will always work hard till the end. We always say to leave it all on the field every night and that’s what we do.

With our offense everyone’s roles are just as equally important as another. But if I had to name a couple players who stand out, I would have to say Jacob Ediger, 12th grade, at spinner back. He knows his spot, does it well, and knows how to get every yard. Another player that will stand out this year is Mario Quintario, 11 grade, he plays both ways but is an outstanding d-back. He flies to the ball and keeps the team motivated. Great athlete overall. The last player I would have to say stands out is Darby Roper, 10th grade, he is not very well known and is a younger player but he knows how to win games. Hes a great athlete and when the balls in his hands you never know what may happen.

The physicality of the sport. It gives us guys a moment just to go out and kick some guys butts.

I enjoy weight lifting and getting better in the offseason. You will see me in the weight room as much as possible.

It’s like nothing I’ve ever done before. Coach Hill is a great guy and coach and knows how to coach. He has a different type of teaching style but it seems to work with most of us guys.

The goal this summer is to get people to strength and conditioning. We are trying to create a bond between the guys that will be stronger than anything we may face.

I plan to go on to play college level football but I am still unsure of what education I want to invest myself in.

My favorite thing to do when I am not on the field is hang out with friends, fish, hunt and spend time with family.

I see myself still living in Kansas making a career to support my growing family.

My favorite subject in school is math. My GPA is a 3.5

My role model is my little brother Andre. He is 13 and has downs syndrome. He shows me a new lesson in life every day. Happiest guy in the world.

One thing most people don’t know about me is my inability to sit still. I hate just doing nothing and always try to find something fun in every environment I am in.