v Faces in KS: Hadley Panzer - Sports in Kansas 
Warning: include(../includes/bodytag.php): failed to open stream: No such file or directory in /home/kansass/public_html/ks/news/index.php on line 36

Hadley Panzer (54) is a prospect on the rise in Western Kansas. (Photo: Lakin HS Yearbook) 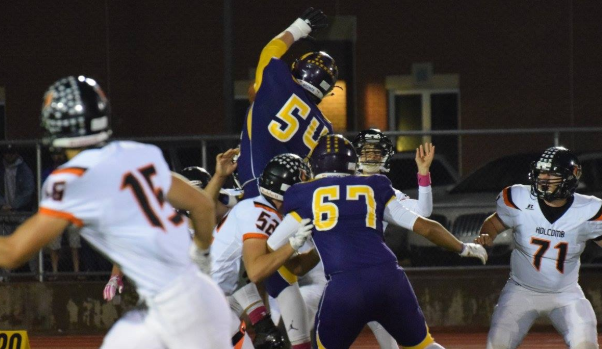 Lakin High School junior offensive and defensive lineman Hadley Panzer has been starting since the time he entered high school on both sides of the football. At 6'3.5" 285 pounds he has been an immediate impact player for the Broncs with his best football ahead of him as two full seasons remain. He has a love for the game.

"I started playing flag football when I was in Kindegarten. I move up the ranks as I grew older into tackle football. I have loved the game ever since." Panzer said.

Panzer could emerge as a prospect with a big junior year for Lakin, a team led by Chris Bamberger, that returns with five starters on offense and five starters on defense. As a sophomore last fall he racked up 82 tackles, 17 tackles for loss with 10 sacks on the defensive line. He earned all-state honorable mention honors from every publication there is.

"I am open to any offer that I recieve. I will do whatever it takes to get the job done and I will give it my best. I believe I have the right mindset to play football at the next level." Panzer said.

Panzer isn't just a football player either. He is a two-time state qualifer in wrestling, winning regionals twice. He took third place in 285-pounds this past winter in 3-2-1A and will be one of the top returning wrestlers in 3-2-1A this season.

Lakin is located about 30 minutes west of Garden City in Southwest Kansas and played in 3A last year and went 7-3, they have now moved to 2A with the new classificaton structure. They are in a six team district this season with Cimarron, Ellinwood, Southwestern Heights, Lyons and Sterling. We caught up with the rising 2020 prospect below in the latest Q&A edition of Faces in KS.

Chet Kuplen, Managing Partner of Sports in Kansas, on Panzer

"Hadley is a kid I have my eye on this season after having a monster sophomore campaign. He's not just a big bodied kid, he's an athlete, proves that in wrestling. He measures in about 6'3.5" without shoes, so he looks the part, heck he's prob around 6'5" in cleats. He could easily be a 300 pound kid but he wrestles and has to stay under 285 during the season. It was good to see him at our combine at the Shrine Bowl, along with his teammates. They seem to have some pieces back on their team this year that make them a solid team in 2A. His best football is ahead of him. I dont know what level it will be right now, but he will have several opportunities to play college football, theres no question. Theres some good stuff going on in that weight room at Lakin right now too."

I started playing flag football when I was in Kindergarten. I moved up the ranks as I grew older into tackle football and have loved the game ever since.

Be a leader on and off the field.

Work harder to get stronger.

Our team has a chance to make the playoffs if we play together and work as a team.

Mindset. I believe that whatever it takes to get the job done, I will give it my best.

We are really good about being a team. I am lucky to play with a bunch of good dudes. When we support one another and pick each other up, we get a lot accomplished.

We have a lot of positions that people will have to step up and fill this year. Some players that will be ones to watch are: Kayden Christiansen, Juan Banuelos, Dawson Aller, Logan Gugelmeyer

I wrestle and play baseball. I stay active all year long. Wrestling is probably my second favorite sport.

It’s really good to be able to be coached by someone who’s played at the D1 level. We all really like him and he brings a lot of intensity when we play. He’s really cool to talk to about anything.

We had morning weights this summer, as well as OTI drills after weights. I feel like we got stronger this summer as a team.

I am open to any offer that I receive. I would like to play college football after High School. I plan to major in something Agriculture related.

Fishing. I don’t get to do it very often, but I like to fish. And hang out with my friends.

I dream about playing football after college. I have to be realistic though and get a good college degree to fall back on though too.

Ag classes. I am the type of student that has to work hard in the classroom to keep my grades up. I know I have to put in the time to study. My GPA is around a 3.5

Bennett Powers. I like the way he approaches the game. He has a mindset that he will dominate the LOS. I want to be like that too.

Buffalo Wild Wings in Garden City. Plus, I never pass up a good buffet either.

I grew up rodeoing. My family is into rodeo and my brother is a rodeo announcer. I used to ride horses a lot and compete in rodeos.

I farm and ranch for Rider Ranch south of town. They have really taken me under their wing and provided an opportunity for me to see what it takes to be in the agriculture industry. I can see myself being a farmer one of these days.