v Faces in KS: Tre Eaton - Sports in Kansas 
Warning: include(../includes/bodytag.php): failed to open stream: No such file or directory in /home/kansass/public_html/ks/news/index.php on line 36 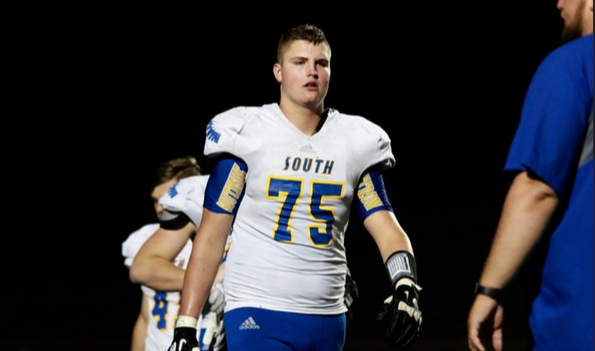 Tre Eaton, senior at Olathe South High School, is a lineman that has flown a little under the radar after giving up zero sacks last season as a junior. His team has struggled recently and Olathe South hasn't really made a lot of statewide headlines since it had Auburn All-American lineman and NFL Draft Pick Braden Smith back in the 2013 high school season. However, Eaton's size is making the headlines this season at 6-foot-7 and weighing 270-pounds.

Because of that, he has a hand full of Division II offers, including power Northwest Missouri, and could turn himself into an FBS prospect with a huge season for the Falcons in 2018.

"I am honored that several schools have offered me already and many coaches at all levels have given me great feedback on what I need to do and given me the motivation to dream big. I am told with a strong season the sky is the limit." Eaton said.

Much like Eaton trying to improve his game to land a FBS offer, Olathe South is on the same path. The Falcons were 4-6 a season ago and 4-6 in 2016, along with a 1-8 record in 2015, the last season under Jeff Gourley. Olathe South last winning record came in 2014 where they went 7-3 also under Gourley. The Falcons are looking for a winning season in 2018 and Eaton feels third year head coach Craig Lewis has the team going in the right direction with six starters back on offense and seven back on defense.

"We are in our third year under Coach Lewis and we are hungry. Coach Lewis is awesome. He's a former player and he understands the grind we are going through. Not only does he make us work hard, he teaches us about life and how to be a respectful young adult." Eaton said.

Look for Eaton to generate some more offers this season and Olathe South to climb the ladder back to being a team to watch in 6A. South has had a ton of success in its history with an 18-14 record in the 6A playoffs with one state title and three 6A runner-up finishes. We caught up with the rising offensive lineman prospect below in the latest edition of Faces in Kansas.

Chet Kuplen, Managing Partner of Sports in Kansas, on Eaton

"Tre obvsioulsy caught our eye with his size. He can really move well for 6'7" and 270 pounds. He is a project for a coach at the FBS level, but sometimes those are the scariest ones because the sky is the limit with the right development. I am actually surprised there is no FCS offer for him at this point. I really think he will be  Division I offer kid this season with a big year. He has everything you need to work with and will get stronger in a weight program at the next level. He also gets it done in the clasroom with a 3.7 GPA. We have kids like this every year in Kansas that recruiters sleep on and it becomes a numbers game on scholarship offers left for schools. The one thing that really stood out to me on his film is he finishes plays. He may not be where he wants to be strength or technique wise but when that comes he could be the total package. Olathe South may look like a team that was bad by their record at 4-6 but thats far from the truth, they were in a lot of ballgames. SFL may have been down a little but their schedule last year wasn't. Their losses were to Blue Valley, Lawrence, Lawrence Free State, SM East, Lees Summit (Mo), and Olathe East. "

This feature is presented by Williams-Gaughan Insurance Agency, proud to support Tre Eaton and the Olathe South Falcons. Best of luck in 2018.

I started playing flag football in Kindergarten.  We moved to Arizona when I was in the 2nd grade, and they had tackle football year around. I’ve been playing ever since then.

My goals are to make the most of every moment of our senior season, and make a playoff run and get Olathe South back on top of the Sunflower League.  Personally I want to execute with perfection and dominate on every play and be a team leader on and off the field.  I will work my tail off to get better and stronger, and I want my work ethic and desire to be infectious to my teammates.

YES, we have a lot of returning starters and depth.  We are in our third year under Coach Lewis, and we are hungry.

I am very coachable.  In addition, I am beginning to understand and take advantage of the leverage my length naturally provides.

ODAC is awesome, and the student section is the best around.

We play an up-tempo offense with equal run and pass and a rally 11 man to the ball defense. We have quite a lot of next level talent.  We are going to do special things in 2018.

No doubt we have a lot of returning starters and a bunch of guys who will play at the next level, but it will take the entire team to accomplish our goals.

I like it all!  I enjoy Friday nights and executing for coaches, family and friends.  I also enjoy our lineman group and the weight room comrade and competition.

I have not played any other sports in school since Freshman year.  I enjoy lifting and rec basketball.

Craig Lewis is awesome – he is a former player and he understands the grind. He is also a winner and he works hard to bring the most out of all of us.  He teaches us as much about life and being respectable, contributing young adults as he does football.  Asst. Head Coach/O-Line coach Nate Harrison, a former O-lineman, is very particular and demands perfection.  He is a motivator and has helped me recognize my potential and has helped me develop into a much better player.

Coach Lewis had a great off-season program that maximized our time together both on the practice field and in the weight room.  A lot of guys put in many hours of extra work with and without the team and also attended multiple camps to get extra reps and coached up to get better.

A good amount of interest at the D2 level now, and I am told with a strong season the sky is the limit.  I am honored that several schools have offered me already, and many coaches at all levels have given me great feedback and have given me the motivation to dream big.  God willing, I plan to play at the next level at a school that will help me develop into a contributing young adult, and that will push me to be the best I can be.

I like hanging with friends, working (building fences and decks) and being a part of the Olathe Fire Explorer program and going on ride-alongs with the Olathe FD.

Proudly being a member of the Olathe Fire Department.

I have many different role models that have had a huge influence on my life, almost too many to mention without leaving some out.  My coaches, my neighbors, my friends from Olathe, Harper County, and Arizona are all a huge part of my support system and have tremendous influence on who I am today.  Two guys that have had a personal touch on my recent life choices and my future are: coach/neighbor/friend/boss Ryan Lonergan and Olathe Fire Inspector/friend Danny Rafols.

My family has always been my biggest supporters. They give me the desire to work hard, to be respectful, and to make them proud.

My Mom and Dad are my biggest fans and have done everything in their power to help me be the best person I can be.  They give me 100% unconditional support in all I do!  I look up to them both for their work ethic and for being good hearted people and role models to my sisters and me.

The best places to eat in Olathe are Strips and also Sam’s Tasty Treats, but Chipotle is my go-to.

That I have a passion for fire-fighting and EMS.