v Faces in KS: Dylan White - Sports in Kansas 
Warning: include(../includes/bodytag.php): failed to open stream: No such file or directory in /home/kansass/public_html/ks/news/index.php on line 36

Dylan White of Pittsburg is a WR to watch for 2018. (Photo: Derek Livingston) 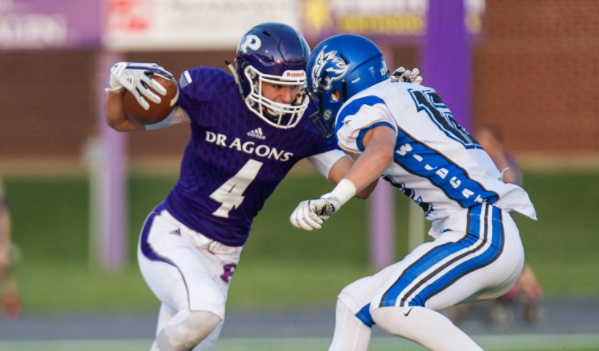 Pittsburg senior wide receiver Dylan White started to work out with his father, Richard White, around the eighth and ninth grade. Richard was a former hurdler and sprinter at Pittsburg State University.

Entering his freshman year, Dylan believed he was running around five seconds in the 40-yard dash.

“I was never really that fast,” Dylan said.

“He pushes me hard,” Dylan said.

They heavily focused on pylometrics, including box jumps, for explosiveness, leg strength and fast-twitch muscles. Entering his junior year, Dylan was down to 4.7 seconds.

“Improved it tremendously,” he said.

Dylan dropped more time to the 4.5 range. At the Blue Grey Scouting Combine, White posted a head-turning 4.44 seconds in the 40, he then followed that up this week with a 4.43 at Southern Illinois Unversity Camp. One of the state’s fastest players, White’s workouts paced him to KPreps Class 5A & Sports in Kansas Non-Senior all-state honors at receiver last fall.

“I think that’s what helps me a lot is that I can’t slack when I am working out with him,” White said.

In his first year of varsity action, White delivered 33 catches for 690 yards and 10 scores. The 6-foot-1, 180-pound White can bench 230, squat 360 and clean 220. Pittsburg finished 8-3 last season in a schedule that included multiple top Missouri schools.

“There was a little bit of nerves just because I have never played on Friday nights, but I knew I had been working hard just to play on Friday nights,” White said. “JV/freshman year, I was really looking forward to playing, and then when I finally get my chance, I wanted to show everybody what I could do, so it really pushed me to do my best.”

Pittsburg has reached the quarterfinals three of the past four seasons. Last year, the Purple Dragons averaged 36.5 points per contest, an increase from 28.9 and a 5-4 mark in ’16. Pittsburg quarterback Chase Curtis earned a Shrine Bowl spot.

In addition to his father, the speedy White credited the coaching staff and head coach Tom Nickelson. Like many other Pittsburg freshman and sophomores, White did not play varsity. But the coaches often gave White and his teammates encouragement when they were in lower ranks to help prepare for varsity.

“Put me in my mind I can do this, and so on the field, it’s just so much easier for me to play and just do what I do best,” White said.

After ‘15, Pittsburg left the SEK for football, a conference mainly of smaller schools that the Purple Dragons had dominated for years. In ’16 and ’17, Pittsburg played an independent schedule versus Missouri powers Harrisonville, Webb City and Carl Junction. In ’16, Pittsburg lost those games 28-7, 28-7 and 53-21.

Last year, though, the Purple Dragons opened with a big win versus Harrisonville, 37-21. Harrisonville was coming off a Missouri state championship, its fifth in school annals. White, in his first varsity contest, enjoyed a breakout game with nine catches for 165 yards and two scores.

“We played really good against them,” White said.

Pittsburg fell 34-13 at Webb City, but White had a 61-yard TD reception, and lost 37-17 against Carl Junction. Still, the Harrisonville victory propelled Pittsburg to its eighth straight winning season and tied for the program’s third-most victories since 2007.

“That’s what led to such a good year,” White said.

This year, Pittsburg does not play the Missouri schools but will face several challenging Kansas schools, including Mill Valley, the 2015 & 2016 5A state champion and Blue Valley North, last years 6A state champion. Olathe East (6A) is also on the schedule that also includes Ulysses, 381 miles away in Western Kansas.

White is again expected to start at wide receiver and likely at defensive back. He could play in the return game. Pittsburg returns five offensive and six defensive starters.

“I want to do everything I can to make sure we win state this year,” White said.

Chet Kuplen, Managing Partner of Sports in Kansas, on White

"Honestly, I had no idea who he was this time last year and I am from the area originally. After the Harrisonville game and some of the highlights, I was like who is this kid?? He followed that up with an aboslute solid junior campaign and shined against top notch competition in Kansas and Missouri (Aquinas, Webb City, Carl Junction). That ultimately led for me to put him on our Sports in Kansas Non-Senior team last year. I was aware how good he was at going up and getting the ball in those high school games, but I was still not aware of his elite speed. He then registered a 4.44 at a Blue Grey Combine this off-season and that's when I realized we have a recruit on our hands. He followed that up with a 4.43 at SIU and he has now generated a D1 FCS offer (SEMO) literally two hours after Conor sent me this feature, so I guess its perfect timing to run a story on him. I dont think the interest will stop here either. If he runs well and looks the part at the Kansas State camp on the 28th, who knows what could happen. Sub 4.5 in high school is rare and it's not a random person affiliated with him timing it, its been done at a very well respected combine and by FCS coaches. He's a hidden gem and I expect him to have another big year. Every year we have a guy come out of nowhere to put themselves on the map and Dylan White did that as a junior. Another thing to remember is traditionally Pittsburg doesn't throw the football a lot, which is understandable with some of the backs they've had, so for him to have 600 plus yards at that high school is very impressive. He's also a very valuable member to his baseball team. I expect PHS to have a solid year in 4A. Will they have some losses? Probably so with that loaded schedule but they have 6A and 5A competition on it. Miege is still on the 4A East so you'll run into them somewhere but Pittsburg has the pieces in place to be really good this year."

This feature is presented by All Seasons Carpet, LLC. Vinyl, Tile. All Seasons Carpet is proud to support Dylan White and the Pittsburg Purple Dragons football team this season. Come by and see us as 4034 Parkview Drive in Frontenac, KS.

I started playing flag football when I was 6 years old in Pittsburg.

I want to do everything I can to make sure we win state this year.

Absolutely! We are really fast and physical at every position this year.

I feel like I am faster, bigger, and have better hands than the defensive backs that cover me.

The community and school is super supportive of the football team so it is awesome to play at Hutch on Friday nights.

I think this year we have a great chance to go all the way.

Jerek Butcher, Dylan Jordan, Joel Kafka, Ty Roark will all be key for us this year.

The game day environment and everyone being excited.

I play baseball and was honorable mention all state this year as a pitcher.

Coach Nick expects a lot out of his players so we always want to give everything we have for him.

We are lifting hard this summer. We are getting faster and stronger for sure.

I love spending time with my family, fishing, and playing video games.

Would like to be working in technology of some kind in 10 years. Possibly as a computer programmer.

That I really love the outdoors.