v Faces in KS: Seth Falley - Sports in Kansas 
Warning: include(../includes/bodytag.php): failed to open stream: No such file or directory in /home/kansass/public_html/ks/news/index.php on line 36

Seth Falley is one of the states top lineman for Campus. (photo: Federico Harvey Jr.) 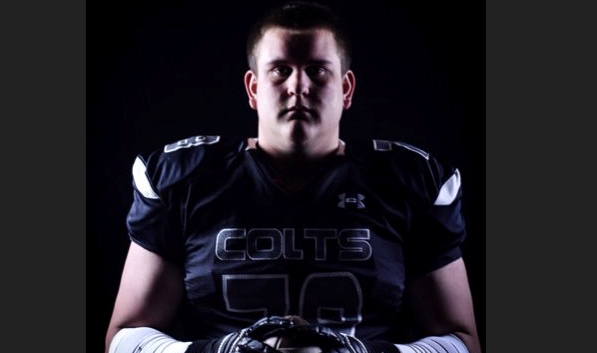 In the 2015 season opener, Seth Falley was a backup freshman offensive lineman for Haysville Campus. The Colts opened with Newton. Just a few minutes into the game, Campus’ starting left tackle suffered a knee injury. The coaches called Falley’s name, and he ran into play.

He immediately faced off against Newton’s Aidan Mills, ranked as the seventh-best player in the state of Kansas and a Kansas State signee. Falley played solidly and helped Campus win, 20-19, the first Week 1 victory for the Colts in many years.

“Some of our senior guys that I still see every now and then, I just remember them, they were happy,” Falley said. “Some of them were crying, because they’d realized all that hard work that they’d put in had finally started to pay off just a little bit.”

Now 6-foot-3, 285 pounds, Falley enters this fall as a four-year starter at left tackle for Campus, one of the state’s biggest surprises in 2017. He has helped the Colts achieve more history, including a 5-5 mark and two victories against Hutchinson last fall.

Campus struggled early with a 21-20 loss to Valley Center in a game where VC had a backup quarterback. Campus lost on a missed two-point conversion on the game’s final play. In Week 3, the Colts fell to struggling Salina South, 42-12. Then, the Colts won three of its next four, including a 35-7 win at Hutchinson in Week 7.

The victories were the first for Campus against the Salthawks since 1999. The second win, a 27-21 road victory in Week 9, marked the first playoff victory in school annals. This fall, the Colts look to bump over the .500 mark for the first time since 2006. Campus, under coach Greg Slade, has now improved from 1-8 to 2-7 to 3-6 to 5-5 in the last four years.

Patrick signed with Missouri before he finished his career in the Wichita area. When Seth was in third grade, he didn’t want to attend football practice. His dad told him you “can either give full effort to your team or you are going to quit,” words that have stuck with Falley since, especially since he became a team captain and leader.

“I want to create my own legacy, but also build on his,” Falley said.

Falley can bench 335, squat 460, clean 265 and run a 5.33 in the 40-yard dash. He has earned an offer from Fort Scott Community College. He has talked with FCS power North Dakota State frequently. Falley has been in contact with Wyoming and Northern Illinois, too.

Falley anchors a line that helped the Colts score 28.1 points a game last fall. Since facing Mills as a freshman, Falley has gone against many other elite linemen, including Wichita Northwest’s Marcus Hicks in a 57-24 Round of 16 playoff loss last year. Falley and Hicks – one of the Midwest’s top prospects with many Division I offers – have been friends since middle school.

Hicks had 19.5 tackles for loss last year. The Campus contest was the only one of Hicks’ 11 games last year where he didn’t record a TFL.

“It was nice to know that I was able to stop him,” Falley said. “That was just kind of a little snippet of history, I like to think of every now and then.”

Falley said he gave up “probably four, five” sacks as a freshman and three as a sophomore.

“Last year, I gave up zero and this year I plan to give up zero, and when you think about just that sheer number, playing against some of the great D-ends that I had to like Marcus Hicks … I’m pretty good off the ball, I’m pretty good at blocking at the second level,” Falley said. “But if I can get maybe just a little more change of direction, I think that will definitely help, because every now and then, you’ve got to block a safety.”

Chet Kuplen of Sports in Kansas on Falley

First became aware of him after watching some Hudl last year. The two wins over Hutch, something they hadn't done in years, definitely help put them on the map as a rising team last year. When that happens you start to notice some of their players, which they had several. After checking out Federico Harvey Jr. I became aware of how well Falley played on the offensive line, so it was a no-brainer for me to have him on our non-senior team. I still think a lot of programs slept on Harvey last year and may be a guy we are talking about with offers after Butler. If Falley were a few inches taller, a problem most of our Kansas kids always suffer in the recruiting ball-game, I feel like he would have a hand full of offers right now. It's still early so I wouldn't be surprised if some interest stirs up for him after the summer and this fall. He's one of the best lineman in 6A and he didn't give up a sack last year facing some top of the line talent. Some kids aren't seniors until they start at a 6A program and he's been starting since his freshman year, so he's played a lot of football. To put that in perspective, guys that were playing football against him in 2015 are now college juniors or redshirt-sophomores at programs. Yeah Campus wasn't great when he started back as a freshamn or really a team anyone talked about but they have done a great job in the turnaround there under coach Slade and Seth is a huge reason why they are where they are headed into 2018.

My father played and was successful so you could say it's in my blood.

Make a run for state and to be All-Metro

I believe we have the pieces just got to put them together.

My nastiness, I line up every play thinking I’m going to beat the guy across from me.

Our community has started to support us more than ever because of our improvement.

The energy our team has is second to none.

Quinton Hicks is an athlete who changes games, Our QB, Evan Kruse is going make a name for himself, Cameron Harvey is an electric player that brings an energy to the game

The Brotherhood that’s made

I’m in track and throw the shot

He cares about us more than just football players.

Our team has worked harder than ever this year. We want to hang banners this year.

I talk to OSU, NDSU, and KU the most and i’d like to study Agricultural Economics or marketing

Hangout with my main man Nate

Math, I like to enjoy school and not treat it as a burden in life.

Brady Foltz, he’s my trainer and someone who's made a difference in my life and has shown me how to live my life.

La Pasadita, best hole in the wall mexican food you've ever had.