v 2018 Sports in Kansas 5A All-State Softball Team - Sports in Kansas 
Warning: include(../includes/bodytag.php): failed to open stream: No such file or directory in /home/kansass/public_html/ks/news/index.php on line 36 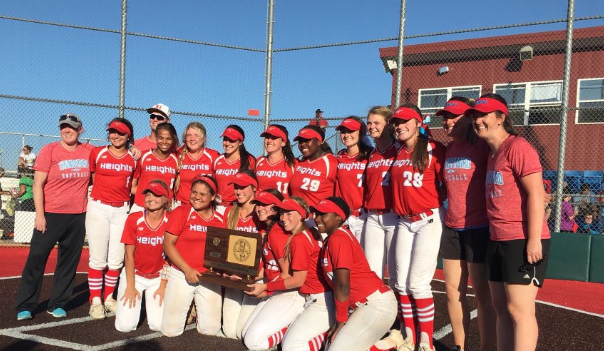 Sports in Kansas 5A Player of the Year

The Wichita State signee had an outstanding senior season in which she his .696 over 25 games with 39 hits, 60 RBI, eight doubles, 15 homers, despite being walked 39 times. She only struck out three times all season and had a .825 on base percentage and 1.642 slugging percentage. She only committed one error all season and was also 8-1 in 12 appearances in the circle as a pitcher.

Sports in Kansas 5A Pitcher of the Year

Petefish helped lead the T-Birds to their second consecutive undefeated season and ranked among the states leaders in strikeouts, ERA and wins in 2018. She was 14-0 on the year with 106 strikeouts in 70 innings pitched for the undefeated T-Birds. She had an ERA of 1.00

After being an assistant for 15 years at 6A power Washburn Rural and then one season at Washburn University, Griffith was hired at nearby rival program Shawnee Heights in August 2017 replacing Steve Giddens who just came off a perfect 25-0 season. Griffith had huge shoes to fill and followed the footsteps perfectly, going 25-0 and winning another 5A state title. Shawnee Heights has now won undefeated titles back to back in 5A with a loaded cast of players, six which made first team all-state in 2018. They have won 50 straight softball games in a loaded league and loaded classification. Her team was very disciplined at the plate hitting .452 and only striking out 54 times in 25 games. Her pitching staff only allowed 21 earned runs throughout the season as well. Shawnee Heights isn't going anywhere anytime soon as a loaded cast of players return again in 2019.

The third baseman put on a show at the 2018 state tournament going 10 of 11 with 10 hits in the tournament. That included two homers. Holt was also a first team all-state selection this season in addition to the outstanding state tournament. Holt hit .559 with eight homers and 40 RBI in 2018