v 2018 Sports in Kansas 4A-II All-State Softball Team - Sports in Kansas 
Warning: include(../includes/bodytag.php): failed to open stream: No such file or directory in /home/kansass/public_html/ks/news/index.php on line 36 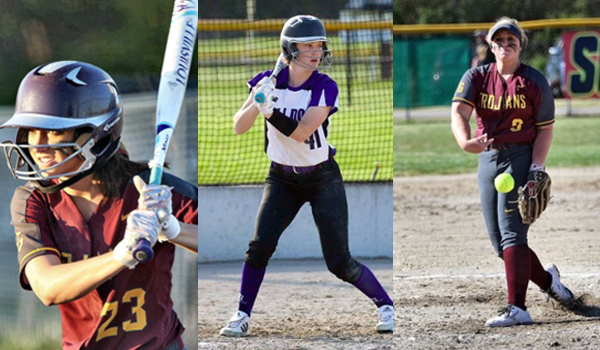 The senior outfielder is one of the best three sport athletes in the state. She led the Trojans to a third-place finish in 4A-II, one year after leading them to state titles in basketball and softball. She hit a team leading .531 on the season with 43 hits, nine doubles, eight triples, two homers and 32 RBI. She also had 11 stolen bases and scored 50 runs (2nd in KS) with 74 total bases (1st in KS). She hit .606 with runners in scoring position and committed zero errors from her center field position in 25 games for the 24-1 Trojans. Crain has signed with Pittsburg State in basketball. She also garnered 4A-II Player of the Year in basketball after leading 4A-II in scoring average with 23 points per game in 2017-2018.

BSN Sports and Mike Ashbacher would like to congratulate the 2018 Sports in Kansas 4A-II Player of the Year, Sydnee Crain of Girard High School. Congrats to the Trojans and their coaches on an outstanding season in 2018.

Girard may have come up short with the title but they had two of the most dominating players in the state this year with Crain and Smith. Smith, who didn’t pitch in the team’s loss to state champion Baldwin, was as dominating as any pitcher in the state in 2018 over the course of the entire season. She went 16-0 on the year while striking out 107 batters in 96 innings pitched with a 0.95 ERA. The Pittsburg State signee also hit .518 on the season with 43 hits in 25 games. She only gave up 48 hits in 96 innings this year. Smith took a huge jump in stardom and improvement this season as last year she was a second team all-league player for the state champion Trojans and now regarded as the top pitcher in 4A-II after dominating her competition in 2018.

Sieana Hall was lights out in the 2018 state tournament for the 4A-II champion. Her 3-run homer against Girard was ultimately what led the Bulldogs to the 4A-II state title. She hit a 3-run run homer to put the Bulldogs up 6-3 over Girard, before Baldwin held off the defending state champion, 6-5 in the semifinals. Hall hit .521 on the season with nine triples, three homers and 25 runs scored with 22 RBI. She has signed with Washburn. Hall’s bat was a huge reason the Bulldogs won five games in a row in the postseason to win the 4A-II crown after entering regional play as a third seed out of four seeds and state as a six seed.

Baldwin (18-7) had an outstanding year in girls sports as they won the 4A-II basketball championship in March and followed that up with the 4A-II softball title in May. They also did it all in comeback fashion. The Bulldogs were the unlikely favorite to be a state champion in softball this season but caught fire at the right time by winning five postseason games to capture the 4A-II crown. It was an unlikely title game pitting a six seed in Baldwin against an eight seed Galena in the state title game. After trailing in the opening round game to Burlington they came back in extra innings to win 12-7 in eight innings. They then upset defending state champion Girard as they gave them their only loss of the season in the semifinals, 6-5. After trailing Galena in the state title game, the Bulldogs won 12-10 to capture the 4A-II crown. Baldwin used a full cast of players to get the job done but where the really dominated was with the power of Audrey Flowers and Sienna Hall in the postseason. Baldwin entered regional play at a third seed but knocked off two seed Osawatomie and top seed Santa Fe Trail to reach the state tournament. Outstanding finish for the 4A-II champion.