v Faces in KS: Kayla Vitztum - Sports in Kansas 
Warning: include(../includes/bodytag.php): failed to open stream: No such file or directory in /home/kansass/public_html/ks/news/index.php on line 36

Kayla Vitztum is one of the best mutli sport athletes in KS. (Photo: Halle Lang) 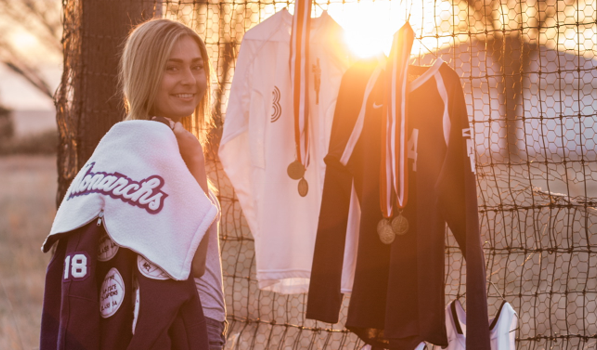 Thomas More Prep senior athlete Kayla Vitzum is the definition of multiple sport athlete. Not only does she play several sports, she plays them to an all-state caliber level. The Monarch senior is one of the best in Kansas at nearly every sport she does.

In the fall Vitztum helped lead TMP to the 3A state volleyball championship earning all state first team honors and all tourney team honors. She was also an All 3A pick as a sophomore and junior. She helped her team to four MCL league titles and is the all-time leader in kills in league history.

In basketball she is a first team all-state selection and helped her team to a fourth place finish in 3A by averaging 17.2 points per game. She averaged 16.9 over her career to go along with 8.7 rebounds per game. Her team was also MCL league champs all four years and they took third in 3A as a sophomore and junior. She scored over 1,000 career points and was the Hays Daily News Player of the Year. She was a three-time All 3A pick from Sports in Kansas.

It's now spring where VItzum is not only an all-state soccer player, she's also a part of her track team. She was an all-state 4A-1A pick last year as a junior and has scored 79 goals as of last week with 26 over her senior year.

For now her focus is on getting her team back for another shot at the state championship where they took second last year. We caught up with the outstanding senior below, who has signed to play volleyball at Newman University, in the latest edition of Faces in Kansas.

How did you get involved with sports and what all sports do you play?

As a kid, my older brother Jared (who plays basketball for FHSU) and his friends would always include me in whatever games they were playing, even though I would typically get pummeled by them! I would always choose to stay in the game though.I play volleyball, basketball, soccer, and picked up track again junior year.

What were your goals and expectations this school year and how has that turned out so far?

In each sport, my goal was to lead our teams to  win league and also get back to state and win state.  In volleyball we accomplished winning our league and won the 3A State Championship. In basketball we won our league and finished 4th in state, and hopefully in soccer we return to the state title game, as we took 2nd place last year.

Each coach has a different personality and way of motivating the team, but for me individually, they all push me physically and mentally as hard as they can to perform as a player and to lead the team by example. Each coach has pushed me to wanting to participate in college athletics. They each also get my sense of humor, most of the time.

Being a smaller school, you really get to know everyone and there are not many cliques you have to deal with.  Plus, it's nice waking up each morning not having to decide what to wear, as there is a school uniform!  The ability to express my Catholic faith with mass, prayer before each class, and required religion class all four years has always appealed to me because it allows me to grow in my faith.

What is it like to be a multiple sport athlete?

I have always participated in multiple sports, even in grade school and junior high. Yet I enjoy the challenge of participating in 4 different sports.  During basketball season it would be a little hard sometimes as I played Club Volleyball and would finish basketball practice and then go to volleyball practice – the last few years after playing in three state basketball tourney games, I would play in volleyball tourney on Sunday, and that was tough.  During soccer season, I don’t get to do too many track meets, but am always able to fit in a few meets. I am not sure what it will be like in college to just concentrate on one sport (volleyball), but I think playing multiple sports will help me in college as it required a lot of discipline with my schedule, plus I never had an offseason to get out of shape!

Aggressive, competitive, vocal, and not afraid to make errors. I always make sure to keep my composure and don’t let the highs be too high or the lows be too low.  Having played multiple sports all these years I probably am not as technical with my skills as I can be, but I am looking forward in college to refining my volleyball skills.

Why did you choose your college and what all offers did you have?

I had interest from NAIA schools, JUCO’s and NCAA II colleges to play volleyball, basketball, and soccer.  I chose Newman University for volleyball because Coach Clark has established a winning, successful program which is competing for conference championships and an NCAA II tourney invites, and it was important to me to join an established program able to compete at a high level as opposed to a program which is rebuilding.  The will be moving to the MIAA conference, which will allow my family to watch more games. I also plan to major in Sonography and liked Newman’s program.  The school is a smaller school which gives a more personal classroom setting. The school is also a private catholic college, which will help me continue to grow in my faith.

Other key players on your teams this year?

My senior class teammates are all key in whatever sport I have participated in, and several members of the junior class have been great players for us. I believe that any player that steps on the court for our team is a key player because each player brings something different to the team.

I would have to say Kailey Ince from Hesston. She is an amazing volleyball player and I can tell she is a natural athlete.

Hays is a small town, yet bigger than the cities around it. It has been nice growing up in this community because they all support you and everyone knows about the team and what we have accomplished.

I enjoy English because I love to write and read. Reading allows me to relax, which is nice in my busy schedule.

I hope to be working at Hays Med as a medical diagnostic-sonographer. Also, to be married and starting a family.

Hands down El Dos de Oros. I could eat there everyday of my life.