Elizabeth Kettler of Hiawatha is a two-time state champ in the 3200 and only a junior. 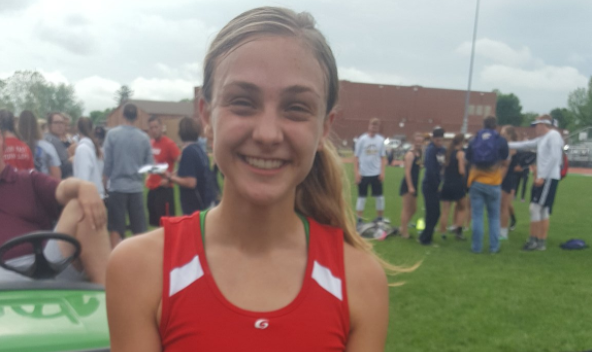 Elizabeth Kettler of Hiawatha High School has been a known name in 3A track and field after winning the 3A state title in the 3200 meters as a freshman two years ago. Quite the feat for your first race ever at a state track and field meet in front of over 20,000 spectators and six classifications.  And it didn’t stop as a freshman either as Kettler repeated last year as a sophomore in the 3A 3200 meters in 2017. She also took second in state cross country as a sophomore in 2016.

“It was such a great experience at state to run against such good competition. Both years the races were so close and there’s no option but to give it everything you have. Those are my favorite races, when you step off the track and known that you didn’t hold anything back.” Kettler said.

Kettler wanted to continue that success in state cross country this fall but a believed to be mucus clot in her right lung stopped any thought of a state title when she may have been the favorite to win it. All of the hard work all season was cut to an end, but to show you what type of competitor she is, she still finished the race after feeling dizzy, seeing spots with about a mile left. After the race Kettler was taken to ambulance at the finish line to get oxygen.

“I couldn’t breathe and my vision was getting blurry with less that a mile left of the race. Eventually I got to the 800 mark and my legs started to lose their feeling and I remember thinking I was going to fall down right there. Thankfully I was able to finish but was dissappointed in all of my hard work to end like that. I am glad to have the experience to push me even harder next year.” Kettler said.

“It’s such a blessing to run at Hiawatha because of the bond the distance runners have. They are all really supportive as our coaches and administrators. It was exciting to win state this year as a team.” Kettler said.

Now a junior, Kettler will look to add her third title in the 3200 meters in her third year of high school track and field. But Kettler knows it wont be an easy path with neck and neck finishes to win it all the last two seasons at the finish line. Kettler has PR’s of 5:30 in the 1600, 2:30 in the 800 and 11:49 in the 3200 meters. She has also been a part of the 4x800 team that has finished eighth and sixth the last two seasons in 3A. Kettler has also ran on the 4x400 this season for Hiawatha.

“This season I am working on increasing my mileage to get my two mile and mile times down.” Kettler said.

For now her focus is getting her times down and back to Cessna next month. We caught up with the outstanding junior distance runner below in the latest Q&A edition of Faces in Kansas.

My parents have always loved sports and it started as a bonding experience with them. I would go on runs with my mom and I eventually grew to love running itself.

This season I am working on increasing my mileage to get my 2 mile and mile times down.

Describe your experience at state cross country and how tough that was this year?

We believe I got a mucus clot in my lung and I noticed that I wasn’t feeling right with a little less than a mile left of the race. I couldn’t breathe and my vision was getting blurry. Eventually I got to the 800 mark and my legs started to lose their feeling and I remember thinking I was going to fall down right there. Thankfully I was able to finish.  I was pretty disappointed to see all of my hard work end like that but I was so excited for the rest of my team and I know that I will have that experience to push me even harder next season.

It’s such a blessing to run at Hiawatha because of the bond the distance runners have. They are all really supportive and so is our administration.

It was such a great experience to run against such good competition. Both years the races were so close and there’s no option but giving everything you have. Those are my favorite races, when you step off of the track and know that you didn’t hold anything back.

I’m pretty self motivated which helps me during a lot training. The last two years one of my biggest weaknesses was letting my nerves get the best of me before a race. So far this year I’ve been more relaxed because I have more experience and I know what to expect.

During the summer is when I do most of my long runs. Last summer I ran about 40 miles a week. During cross country season my miles decreased a little as we focused on more of the speed work. Usually I’m limited on running time during the week in basketball season so I try to go on longer runs on the weekend for those months. Once track starts we focus again on building my mileage and as the season progresses we do more speed workouts. In addition to the running I do core all year round and summer weights.

How’s the recruiting process going and who’s talking to you?

I’ve corresponded with a wide variety of schools ranging from division 1 to junior colleges. Right now I am looking for schools that will allow me to continue running and also provide academic opportunities because my education is very important to me.

I’ve really enjoyed being teammates with Kate Madsen this year. Not only is she a great runner, but she is also a very supportive teammate. She always stays after practice to do core with me and she doesn’t mind doing extra if it means she'll improve. She has a lot of talent and a great work ethic so I’m very excited to see what she is able to accomplish in the next few years.

She’s really big on team bonding which I am also a huge fan of.

The best runner I’ve ever faced is Hannah Honeyman from Santa Fe Trail. She always has a really great kick during the last two laps of the 3200. Another really talented athlete I will face this year is Hannah Burks of Beloit. We had A close race at state track last year so it will be fun to run against each other again this year.

It’s really nice to grow up in a small community because everyone knows you and supports you. Whenever I go on runs people wave and some ask how my running is going.  It feels good to have that kind of support from the community.

In 10 years I see myself either becoming a doctor or a teacher. I still see myself running in my free time because it is something I love to do.

My favorite place to eat is a coffee shop we have called the Daily Perk.