v Emily Ryan of Central Plains named Sports in Kansas POY - Sports in Kansas 
Warning: include(../includes/bodytag.php): failed to open stream: No such file or directory in /home/kansass/public_html/ks/news/index.php on line 36 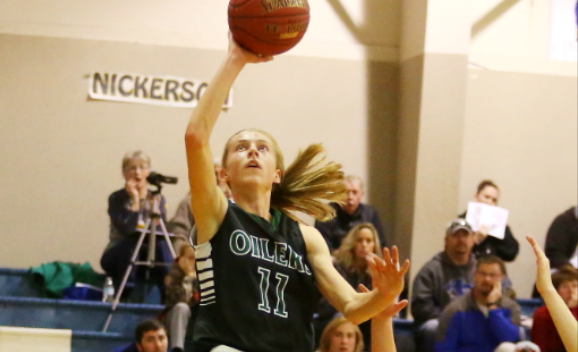 On the short list for state’s best player, regardless of class, Ryan paced Kansas with 34.5 points per game on her way to earning all classes POY. Ryan also rarely played at all in the fourth quarter this season in most games. The Oiler only full-time returning starter, she led Central Plains to a fifth straight state title, a record, and its fourth undefeated season in the last five years. CP tied Miege for the most perfect seasons in state annals. Ryan has received significant Division I interest, most notably from Kansas State. She averaged around seven assists a game for a team that challenged multiple state marks, including average margin of victory and three-point field goal percentage. At the state tournament, Ryan averaged 27.7 points a game, including 21 of 23 from the free throw line. The rest of the Oilers combined for two double-digit performances at state. She helped CP’s defense hold all three teams at state to a combined 26 percent shooting. Ryan averaged over six steals and rebounds per game this season and shot 51 percent from three. She also shot over 91 percent from the free throw line this year. There are a lot of comparisons to Jackie Stiles and why wouldn't their be as she plays for Jackies father, Pat, who has lost one game in five years. Ryan may be the most complete and efficient player we have seen in Kansas in multiple years. She had a career high 54 points this season.Central Plains isn't going anywhere as Ryan is on pace for 3,000 points in her career with two seasons left play as she has totaled 1,466 in just two years. CP has won 84 consecutive games.