v Sports in Kansas: 2018 Boys Basketball POY Honors - Sports in Kansas 
Warning: include(../includes/bodytag.php): failed to open stream: No such file or directory in /home/kansass/public_html/ks/news/index.php on line 36

Ben Pyle of McPherson named all-classes POY and 4A-I Player of the Year. 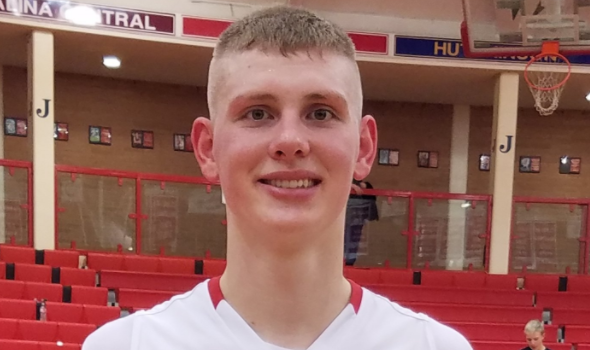 Pyle, a Western Illinois commit, is the all-time leading scorer and rebounder in the storied history of the McPherson boys’ basketball program. Pyle tallied 22 points in a 57-54 loss to Bishop Miege in the state title game. Pyle, able to play all five positions, helped McPherson finish 22-2. He averaged 22 points, eight rebounds and five assists a contest. He averaged at least 15 points a game in his last three seasons. In his career, Pyle finished first and then had three straight runner-ups to Miege.

Pleasant led Blue Valley Northwest to a second straight Class 6A state title and fourth since 2013. Pleasant, one of five seniors, helped BVNW to a 21-4 record. The Huskies opened 4-4 with all losses against non-Kansas schools, including from the St. Louis and Kansas City area. BVNW ended the season with 17 straight victories. He had 21 points on 9 of 13 shooting and five rebounds in the state opener against Lawrence. In the semifinals, he delivered 21 points on 8 of 9 shooting versus Derby. Overall, BVNW shot 76 percent versus Derby. In the final versus Free State, he recorded 19 points on 6 of 10 shooting with five rebounds. He has committed to Abilene Christian.

5A Sports in Kansas Player of the Year – Marque English, 6-6, Sr., Pittsburg

English helped Pittsburg to a third-place finish, the team’s best showing in 21 years. He averaged 20.5 points, 8.1 rebounds, 2.6 blocks and 1.3 steals a game and shot 57 percent from the field. Pittsburg, the No. 2 seed, opened with a 59-40 win against Topeka Seaman before a 51-46 loss to Salina Central in the semifinals. Pittsburg finished 21-4 with a 58-56 win against Mill Valley in the third place game. He averaged 19 points and eight rebounds at state.

Pyle, a Western Illinois commit, is the all-time leading scorer and rebounder in the storied history of the McPherson boys’ basketball program. Pyle tallied 22 points in a 57-54 loss to Bishop Miege in the state title game. Pyle, able to play all five positions, helped McPherson finish 22-2. He averaged 22 points, eight rebounds and five assists a contest. He averaged at least 15 points a game in his last three seasons. In his career, Pyle finished first and then had three straight runner-ups to Miege.

Harvey stamped an all-state season with 34 points in a 65-57 state title win against Holcomb. He averaged 26 points at the state tournament and 23.1 for the year. Harvey has received multiple Division I offers, including Kansas, Kansas State and UCLA.

Phillipsburg was considered a state contender when the year started, even though Sides, a three-year starter at quarterback, was out due to a thumb injury suffered in the fall. Sides returned after Christmas to a team that had a 5-1 record – and significantly improved the Panther offense. Phillipsburg went 23-2 and didn’t lose until the state title game when it fell 44-43 to Halstead in the final seconds. It marked the team’s first trip to state in 45 years. Sides helped his dad, longtime Panther coach Keith Sides, win his 200th career game this year. Overall, Sides led the team with 12.4 points, 4.9 rebounds, 3.7 steals and 2.9 assists a game. Without Sides, Phillipsburg averaged .82 points per possession, shot 43 percent on 2-pointers, and averaged 12 free throw attempts a contest. With Sides, the Panthers had .97 points a possession, shot 49 percent on 2s and averaged 18 free throw attempts a contest. Sides has 913 points in his career.

Busse is one of the state’s top all-around athletes. He earned a Shrine Bowl nod in the fall, one of four eight-man players selected. Last year, Busse helped SF take fourth in 1A-I basketball, the best hardwood finish in school annals. This season, Busse was the lone returning starter for his dad, coach Cory Busse. He averaged 28 points a contest and delivered more than 1,700 in his Indian career, a school record. He scored 38 in a sub-state semifinal loss to Plainville, an eventual state qualifier. Busse is an exceptional track athlete and was part of St. Francis state title relay teams last spring.

Peters led South Gray to a 26-0 record, the fourth state title and first perfect season in Rebel annals. Overall, he averaged 16.6 points and 10.8 rebounds a contest with 45 dunks. At state, he finished with 20 points and eight rebounds in the first round against Rural Vista. He delivered 16 points and 10 rebounds in a 43-37 grinding win versus St. John in the semifinals. In the championship, Peters finished with 23 points and 13 points in a win versus Hanover. Peters delivered 1,181 career points and recorded 721 rebounds with a 63.4 career field goal percentage. He helped South Gray win the 1A team title last spring and captured the titles in shot put (52 feet, 2 inches) and discus (175-11). Peters has received Division II interest for basketball and Division I for track.

Sides the Huskies’ sharpshooting guard, paced Northern Valley to its first state boys’ basketball championship since 1991.  He averaged 17.4 points, 5.4 rebounds and 2.2 steals and paced the team in points and assists. Sides helped the Huskies average nine made treys a game and shoot 39 percent from long range for the second straight year. He sunk 76 treys on 42 percent shooting, made 74 percent of his free throws and 52 percent of his two-point shots. For his career, Sides has averaged 16.1 points, 4.6 assists and 4.1 rebounds a game. He has 1,114 points, including 208 treys.

Berry averaged 24 points per game and is a rising star as a sophomore for the Railers. He is one of the most heavily recruited sophomores in the state of Kansas. He also earned first team 5A all-state honors from Sports in Kansas.

He averaged 22 points a game as a freshman this year in the city league. HE also earned second team Sports in Kansas All-6A honors.