v Faces in KS: Damon Schmidt - Sports in Kansas 
Warning: include(../includes/bodytag.php): failed to open stream: No such file or directory in /home/kansass/public_html/ks/news/index.php on line 36 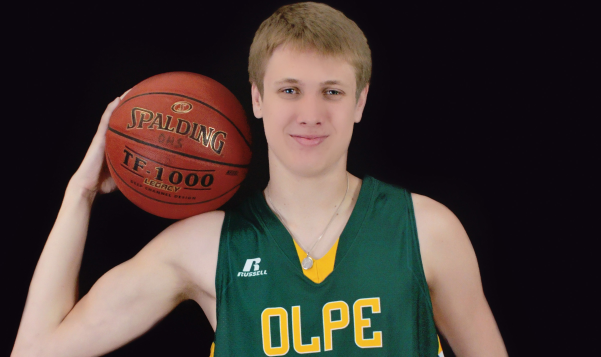 Olpe is a small community of just over 500 people that is located 10 miles south of Emporia. Olpe is a known sports town over the years with several solid athletes and teams in the small classifications of Kansas, whether that's basketball, football or in track and field team. It's no different this year as Olpe features one of the top 2A multi-sport athletes in the state for the 2017-2018 school year in Damon Schmidt.

Schmidt, a 6-foot-4 senior, excels on the basketball court for the Eagles as he is averaging 25 points per game and 12 rebounds per game so far in 2017-2018. It doesn't stop there either as he was an all-state 2A pick at tight end this fall and was selected to the 2018 Kansas Shrine Bowl last month. Schmidt isn't just having a big year either, he's had quite the career at Olpe. Last year as a junior he averaged 22 points per game, 11 rebounds per game, two blocks per game and two assists per game on the way to earning second team all-state honors. Schmidt was also an all-state strong safety as a junior in the fall of 2016.

It's pretty special for Schmidt to play for Olpe because of the community support, knowing everyone and he gets to play for a person he knows pretty well. At Olpe, he plays for his father, Chris Schmidt, who helped lead Olpe to their only state football title back in 2014. Schmidt is the head boys basketball coach as well as the head football coach and has saw a lot of success as the head man.

"It has been fun to play for my dad. It's been pretty special. I feel like our relationship has grown through the years that he has coached me. Like everyhting there are going to be ups and downs but it has been a great experience. I cant ask for a better coach and father. I have also had great assistant coaches to play for." Schmidt said.

Schmidt has been putting up quite the numbers recently as he had a 42 points and 12 rebound outing against MDCV in the first round of the Lyon County League tournament last week. It also put him over the 1,000 points in a career milestone. He followed that up with a 36 point and 15 rebound night on Friday over Madison/Hamilton before falling to Burlingame in OT in the tournament championship for one of their two losses this season. Back on the 18th of January he also went for 37 points and 11 rebounds. Schmidt has been blowing up lately and has been an unstoppable force for many over the 2017-2018 basketball season.

Olpe is also off to a hot start for the 2017-2018 basketball season with a 11-2 record and a team to watch in 2A basketball this year. The Eagles are ranked eighth in the latest Kansas Basketbal Coaches Association (KBCA) Poll released today. They will be back in action on Tuesdy as they play Central Heights and then will take on 2A #3 Lyndon on Friday. Olpe is in a very competitive sub-state that features Lyndon, Burlingame, Jeff County North and Jackson Heights, all teams that could be considered high quality 2A basketball programs. The Olpe girls led by Brianna Vogts are also off to a big year once again under head coach Jesse Nelson as they are ranked #2 in 2A by the KBCA. We caught up with Damon below in the latest Q&A edition of Faces in Kansas.

Growing up with my dad as both the football and basketball coach at Olpe High School I was able to get involved with sports at an early age. The culture of sports is part who my family is, so I grew up playing a lot of sports and going to a lot of games.

Our first goal is just improve each and every night and to be playing our best basketball at the end of the season. Our ultimate goal though is to reach the state tournament and be able to compete for a State title. Our sub-state will make that goal difficult this year because there are a lot of quality teams, but we are excited for that challenge.

What is it like to play for your dad as the coach?

With my coach being my Dad it has been pretty special. I feel like our relationship has grown through the years he has coached me. There have definitely been some ups and downs along the way, but it has been a great experience. I couldn’t have asked for a better coach or father.

You’ve been having some big games, talk about how big that’s been?

The main thing I would say is having the success I’ve had recently has made this season a lot of fun. My teammates have done a great job of getting me the ball in a good position to score and I’ve been able to take advantage. Hopefully I will continue having this success the rest of the season.

I feel my strength is just attacking the basket whether it’s posting up or driving the basketball. I have variety of moves inside and I feel I do a good job of be patient and getting to the spot on the floor I want to be. My main weakness is my outside shooting. I have made some improvements throughout the year, but it’s still not as consistent as I want it to be.

I have some interest from several schools at this time, but at the moment I am mostly just trying to focus on my own basketball season right now. I really enjoy playing high school basketball, so right now that’s my main priority. I will look more into my plans for the next level after the season.

Everyone on our team is crucial to our success as a team and I am grateful for all my teammates. I feel though my starting guards Camden Hoelting, Kadon Redeker, and Garrett Pimple have all done a great job this year making shots and playing great defense out on the perimeter. A key player for our team though is Wyatt Schulz. He’s a bit undersized to play the post position, but he does a great job spreading the floor with his shooting and he’s overall just a very solid player for us.

I feel the best player I have ever played against is Duncan Fort from Osage City. I learned a lot from him because he was just so good at finding ways to score around the rim. Some key players that I have played and that I’ll play this year are Jake Thompson from Burlingame, Jaime Reed from Lyndon, Tyson Wilkins from Osage City, and Chonnar Ludolph from SCC. They all are different players but they all are great at what they do.

How awesome was it to get picked for Shrine Bowl?

It’s just an amazing honor to get selected to compete in a game like this. The impact this game has on families and kids is so special and I’m truly honored to be able to be a part of it. I had the opportunity to watch my Dad coach in the game twice, so I know what all goes into the game. I am looking forward to the opportunity.

What’s it like to play for all your coaches in all sports at Olpe?

For the majority of my career my Dad has been my head coach so that has been fun. I also have had great assistant coaches throughput my career. I have grown close to all of them and they all have impacted me both as a player and as a person.

My only other sport is football. I really enjoyed playing football. It wasn’t something I loved at the start but throughout my high school career I began to enjoy it more and more.

It has been great growing up in Olpe. The community here is very involved with our school. They are very supportive of you and you feel like you can trust everyone. I am lucky to live in a town like Olpe.

I see myself in ten years teaching in a school here in Kansas and coaching a team also.

Olpe Chicken House. Definitely try it out if you come through town!