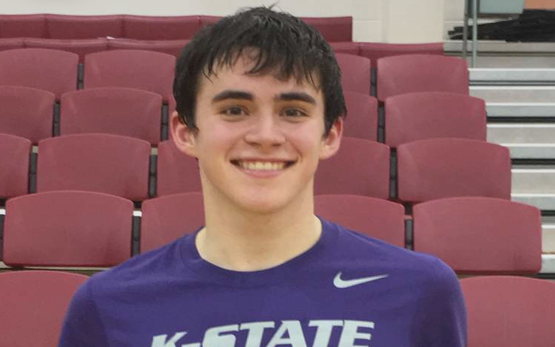 Hoxie is a small western Kansas town of around 1,200 people where everyone knows everyone. The talk of the town over the last few years has always been the girls basketball team who won a state record 107 consecutive games from 2012-to-2016. How could it not be? That almost sounds made up. It's also a wrestling town with several state titles over the years. This year it even became a football town as the Indians won the 8M-I state championship less than a month ago in dominating fashion over St. Paul, 54-14. It was their first state title in the 8-man ranks. We are starting to think it's just a sports town in general as the boys basketball team, who has never won a state title in its program history, is currently ranked second in the state of Kansas in 2A.

A big reason for that basketball success is senior guard Easton Slipke. Slipke helped the Indians to a fourth-place finish last winter in 2A after earning all-state honors from Sports in Kansas. The 5-foot-10, 160-pound, senior shooting guard, averaged 18.4 points per game last year. Slipke lives in a gym and has loved the game since he has been a little kid.. He put in a lot of extra work this off season and it’s showing as he is off to an average of 19.2 points per game over the first six games for his undefeated squad. In addition to earning Sports in Kansas 2A all-state honors last year he also picked up All-League, All-Area and 2A All-State honors from the Wichita Eagle and Topeka Capital-Journal.

Hoxie also returns Latham Schwarz, who was also the 8M-I Sports in Kansas Offensive Player of the Year in football this season, who averaged 12 points per game last season. Jarrod Dibble also averaged 11 points per game and is back along with Sean Robben and Logan Wellmer. The Northwest Kansas League (Hoxie, St. Francis, Sharon Springs, Rawlins County, Tribune-Greeley County, Dighton, Quinter) is always loaded with athletes in all of the sports year in and year out. So there’s no question that the Indians will be tested throughout the regular season.

Hoxie is currently 6-0 and won the Castle Rock Classic Tournament for the second year in a row. The Indians will get a bit of a holiday break before coming back into action on the 5th of January against Tribune-Greeley County. Does Hoxie have a shot to also add a basketball title? With some of the athletes they return along with Slipke they certainly have a shot. We will found out this March but for now we caught up with the outstanding senior guard below in the latest Q&A edition of Faces in Kansas.

I got involved in sports when I was a Kindergartner, and signed up for my first basketball camp. This is where and when I fell in love with the game! I stayed involved in sports by playing all of our Recreation sports, such as Basketball, Football and Baseball, and Golf.  But most of all my family believing in me and realizing how much I loved competing in sports so they would drive me to camps, games and practices in town and out of town to better myself.

The goals I have for the basketball season is to work hard each and every day, giving 100% and more in practice and in every game. I want to go undefeated  and win the State Championship. We won our sub state this past year and played in the State Tournament in Manhattan, but we came up short placing 4th. We start this season with everyone back and our goal is set on the State Championship. I believe we can make this happen as long as we stay focused and believe in ourselves.

Coach Moss is a great coach and he coaches to our style of play. We run the “run and gun” style! And this is how we out last a lot of our competition. He knows we are not going to be the biggest and tallest team, but we can sure be the fastest and most conditioned. He has pushed me very hard in every practice all season long every year to be better than the last. He has seen my potetnial and my ability to do great things. He strives to make me better and pushes me to improve my weakest points, and glory in my accomplishments.

I like to think of myself as a play maker whether its in scoring, passing, or key defensive plays. I have the ability to see the court and make things happen. My strengths are scoring the 3-pt shot and really any inside the arc shots as well. And I strive to make every shot, or you can find me in the gym putting up shots at night and on the weekends to always be better.

I plan on playing college basketball after high school. This has always been a dream of mine since I was a little kid, and a goal of mine since playing in high school, and I am starting to see it become real. I have seen interest from colleges, and have went on some awesome college visits. I plan to decide on a college  after our basketball season!

Latham Schwarz is our point guard, and he and I have played together since we were in 2nd grade, and we know eachothers strengths and weaknesses like the back of our hands. He is one of the best defenders on our team. Dible is one of the best rebounders.

There have been a lot of great players I’ve played against...Trey Sides, Tate Busse, and will face these guys this season. Also there’s  Mikey Wycoff and Caleb Jordan that we met up with at the State Tournament this last season.  I’ve also met up with and competed against some very good players playing on a summer basketball Elite team “DTS” elite team and the “Western Kansas Elite”.

I am also on the high school Golf team. We have made it to State Golf every year since I’ve been  in high school, getting 3rd as a team my sophomore year and I placed 11th individually.

I love my hometown of Hoxie, Ks. Its a very small community, where you know most everyone, and everyone knows you. Our community is very close, and very supportive in everything the youth do. We live a pretty simple life here in Hoxie with it being a farm community and growing up with Hard working people! We have big followings for all of our sports. Nothing better than to play a basketball game in a packed gym!

My favorite subject is Accounting. I plan to study Ag business in college

I see myself settled down in a small town with a family and steady job, and  being a part of or having interest in our family farm!

We have a few good places to eat in our town, but my favorite is the Hitchin Post and their hot boneless wings.