v Labette Bank Athlete of the Month: Peyton Brown - Sports in Kansas 
Warning: include(../includes/bodytag.php): failed to open stream: No such file or directory in /home/kansass/public_html/ks/news/index.php on line 36 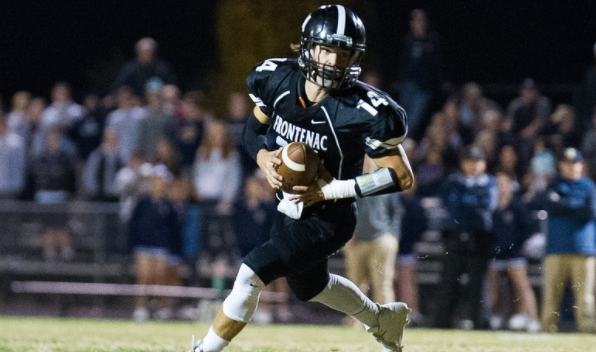 The Labette Bank Athlete of the Month from the Southeast Kansas area is Frontenac senior quarterback Peyton Brown.

Brown, who was a first year starter at quarterback, had big shoes to fill in taking over for Sports in Kansas 2016 4A-II Offensive Player of the Year Brandon Mlekus. It was a rough start early for Brown and his teammates, but the Raiders did what nobody thought they would do in 2017 and that's play for a 4A-II state title. They caught fire in the playoffs and pulled off impressive upset victories over both Holton and Topeka-Hayden. It marked their first appearance since 2000.

Brown passed for 1,597 yards with 21 touchdowns, while rushing for 330 more with six touchdowns to lead the Raiders to a 9-4 mark and 4A-II state runner-up finish in 2017. Not too bad for a first year starter under center. His 1,597 passing yards are believed to be the second most in a single season in Frontenac history, trailing Mlekus who had 1,830 over his junior year. Brown ranked sixth in 4A-II in total passing yards in a balanced Frontenac attack. Brown's top target was Top 11 all-state all-class selection Broc Ginavan who had over 600 yards receiving this fall. Ginavan was also the 2017 Sports in Kasnas 4A-II Defensive Player of the Year for his play at defensive end. Brendan Ishimura had a huge junior season as well with 475 yards recieving with four scores, while all-state defensive back Jake Wilbert also had a break out year on offense with over 200 recieving and 1,205 more on the ground with 23 total touchdowns.

-Nominations MUST be emailed. Please email Chet Kuplen at sportsinkansas@gmail.com during the last seven days of the month to nominate your athlete!