v Play like it's your last play - Sports in Kansas 
Warning: include(../includes/bodytag.php): failed to open stream: No such file or directory in /home/kansass/public_html/ks/news/index.php on line 36 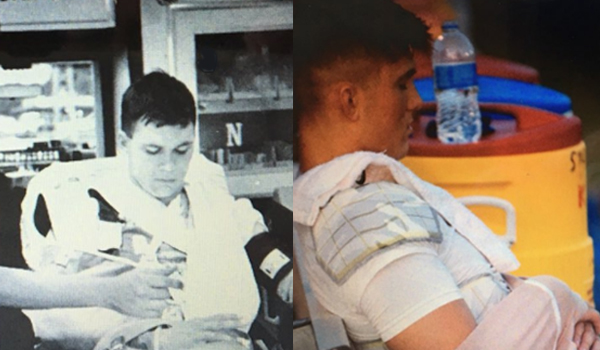 Brian Hutchins never imagined breaking his collarbone 26 years ago while playing quarterback for Pittsburg State, nevertheless did he imagine watching his son, Bryce, do the same thing 26 years later. Bryce, a senior quarterback at St. Marys Colgan in Pittsburg broke his collarbone on the sixth offensive play of the 2017 season in a scary scene.

“I was rolling right and got pressured,” Bryce Hutchins said. “I went to cut up and got hit from behind and landed directly on my shoulder with all of my weight. I immediately knew it was bad.”

Hutchins was told by the doctors that there was a good chance he would never play another down of football again, but Bryce was a fighter and was determined that he would. Hutchins had surgery done on September 5th to have plates and six screws inserted on his throwing shoulder, five days after the Panthers suffered the 16-0 loss to Galena in that week one game.

“It was a sad day when we found out he might not play again for sure,” Brian Hutchins said. “It was especially tough since it was his senior year and he put in a lot of hard work to have a successful year as quarterback and linebacker and then boom! it is all taken away. It was like déjà vu when I had the same injury in 1991 on the first play of the second game at PSU.”

Brian Hutchins, a Pittsburg High alum, will go down as one of the greatest quarterbacks in Pitt State history. Hutchins led the Gorillas to the NCAA Division II title in 1991 and a runner-up finish in the 1992 season. Hutchins also was named an NCAA DII All-American, as well as All-Conference honors in the MIAA. He passed for over 3,000 yards and 25 touchdowns, while also rushing for over 2,000 yards. Hutchins had an impressive 27-5 mark as the Gorillas starting quarterback. The game where Hutchins was injured ended the Gorillas 56-game regular season winning streak in a 20-13 loss to East Texas State.

Right after Bryce had broken his collarbone, the question was whether or not he’d play football again. The doctors said there was a slim chance, but Brian remembers what it was like for him to come back from the same injury and win a National Championship, so the chance was there for Bryce.

“After his injury we immediately pulled out the old Pitt State schedule from 1991,” Brian Hutchins said.  “We started figuring out how long it took me to come back and compared to his schedule.  We both injured our throwing arm but his injury was worse than mine requiring surgery.”

There were big expectations for Bryce this season, being named one of the Sports in Kansas Top 25 linebackers to watch in the state this year. While Bryce was sidelined with his injury, he still attended all of the Panthers’ practices and continued to watch the team produce every Friday night in the fall. While it was tough on Bryce, he still was happy to be there supporting his teammates.

“It was difficult,” Bryce Hutchins said. “I wanted to be in there helping them and couldn’t. Cade (Simmons) stepped in at QB and did a great job and other players stepped up and played well..  I tried to encourage the team, but really wanted to get back in there.”

Hutchins went to physical therapy every week, hoping that the bones would heal correctly and that he’d get that second shot of playing another down in his senior year. All that Bryce wanted to do was get back out there between the lines on the field and help his team battle for a state championship, because they knew they had a team that was capable of it.

“Dr. Stringer said that the bone was healed and gave me the green light to participate again,” Bryce Hutchins said. “That was a moment I’ll always remember, because I knew that I’d have a second chance.”

The process wasn’t easy though, as Hutchins figured out. The lengthy process of making sure the bone was healed was the biggest part, because they didn’t want him going back out there and injuring it again.

“Bryce was lucky to have tremendous care and treatment for the injury,” Brian Hutchins said. “Dr. Stringer did an amazing job on his surgery. Ryan Niederklein, the team doctor was a big help with the recovery process and treatments. Bryce’s mother Stacy (who is a physical therapist) worked with Bryce “every” single night on intense rehab. We were lucky to have the best team off the field that enabled Bryce to get back on the field.”

Bryce was able to return to practice on October 16th, 46 days after breaking his collarbone in the game at Galena.

“It was  a second  chance I wasn’t sure I’d get,” Bryce Hutchins said. “I was sore and my shoulder was tender, but even the scar tissue opening up a little wasn’t going to keep me from practicing.”

Hutchins was able to return to game action on Friday, October 20th when the Panthers played host to Oswego in the second game of the 2-1A District 4 play. The Panthers went on to win that game, 63-6. Hutchins scored a touchdown on his first carry back from the injury, so you can bet that brought some excitement in the Pittsburg air that Friday night.

“Cade and I alternated series the first game I was back,” Bryce Hutchins said. “After that I felt good and coach was confident in me to run the offense.”

Hutchins had been a presence on the offensive side of the ball, but also was a playmaker at linebacker for the Panthers. After he returned from his injury, Hutchins only played quarterback for the Panthers, so he wouldn’t have more of a chance to re injure his shoulder.

Bryce helped lead the Panthers to the 2-1A state championship game under first year head coach, Shawn Seematter. Seematter, like Hutchins also was injured during his senior football season, but unfortunately for Seematter, he wasn’t able to get that second chance while playing at Royal Valley High School in Hoyt, Kansas.

“Coach Seematter had season ending injury as a senior, so I know it meant a lot to him to see Bryce back out there competing after the injury,” Brian Hutchins said.

Hutchins led the Panthers to five straight wins after his return, including three consecutive in the 2-1A playoffs over Lyndon, Centralia and Olpe.

The Panthers lost to Smith Center, 43-7 under the lights of Lewis Field Stadium in Hays on November 25th, but for the community of Pittsburg and the Colgan faithful, getting back to the state championship game was a blessing. The Panthers finished the season with a 10-3 record.

“I’m happy we finally made it as seniors,” Bryce Hutchins said. “We put in a lot of hard work and were fortunate to play in quite a few playoff games the past four years and to top it off going to state as seniors was great. It’s something I’ll always remember.”

Bryce Hutchins finished his senior football season with 229 yards passing and five touchdowns in seven games for the Panthers, while rushing for 80 yards and four touchdowns in limited action.

Hutchins plans on continuing to play baseball for Colgan in the spring and will hope to be apart of a team that wins it’s third state championship during Hutchins’ time at Colgan on the diamond.

Hutchins plans on attending college next fall and majoring in physical therapy.

As Brian Hutchins said, “It’s a good lesson that when coaches tell you ‘play like it’s your last play,’ it really means something that you never know when you might be done with a sport.”

Special thanks to mpix.com for presenting this feature. Visit them online here.