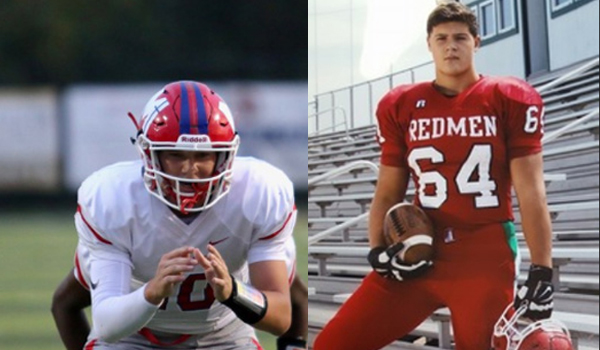 2017 Sports in Kansas All-Classes Offensive Player of the Year

What more is there to be said about a senior quarterback that led his team to three state titles as a starter as Miege won its fourth consecutive 4A-I state football title. Well a lot actually, because he rewrote the record books in Kansas this season. The 6-foot-0, 190-pound, senior, threw for 9,336 yards in his career (state record) to go along with 124 passing touchdowns (state record) at Miege. He threw just 13 interceptions in 720 passing attempts. He had 2,844 yards passing with 38 touchdowns as a senior with only five interceptions. He also added with his legs this season with 596 on the ground and another 11 rushing. We aren’t saying he’s the best football player of all-time in KS or a major football recruit, he’s a Notre Dame baseball signee, but it’s hard to argue that he may have had the most accomplished high school career out of any passing quarterback in Kansas high school football history. Putz has been a first team non-senior selection at Sports in Kansas the last two years and was also the 2016 Kansas Gatorade Player of the Year. He was also named the 4A-I Player of the Year by Sports in Kansas and made both majors newspapers Top 11 squads.

2017 Sports in Kansas All-Classes Defensive Player of the Year

Kuhn has size, is quick and is powerful to say the least. You should take a glance at his HUDL video just to see what exactly what we are talking about, that is if you like hard hits. The 6’2” 235-pound senior had 95 tackles this season, 20 of which went for loss, in limited time due to blowouts in many games. The Redmen defense was one of the most impressive units in the state as they won their first state title since 2008. Kuhn has an offer from Fort Hays State and a preferred walk-on offer from Kansas State, which is very elite as the Cats only offer about a hand full of those out in Kansas a year. Smith Center only allowed 35 points over their last 10 games of the season and outscored opponents 242-to-21 in four 2-1A playoff games. Kuhn also helped pave the way for nearly 340 rushing yards per game in 2017. He was also named the Sports in Kansas 2-1A Player of the Year and named to the Top 11 squads (all-classes) by the Topeka Capital-Journal and Wichita Eagle.