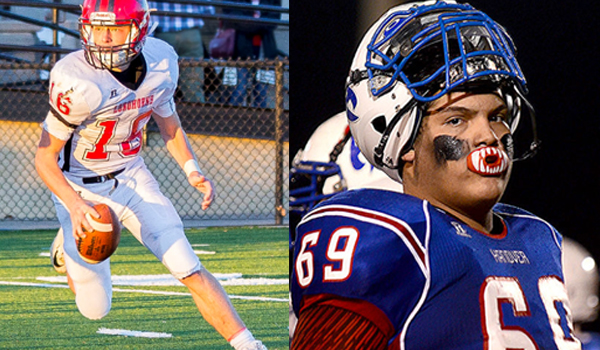 8M-II Offensive Player of the Year

Salmans has been around forever as a four-year starter for the Longhorns in leading them to an 8M-II running up finish and a solid effort that fell short on the late comeback, 54-48. For his career he has thrown for 5,244 yards with 68 touchdowns while rushing for 1,801 with 33 more scores. As a senior this year he accounted for 28 touchdowns and over 1,900 yards of offense. If the name Salmans sounds familiar that’s because his father, Oliver, was one of the best 8-man players of all-time, making a Top 11 all-state all-class team for the Hanston Elks back in 1989. His uncle, Luke, also was a Top 11 selection for the Elks in 2001. Hanston consolidated with Jetmore a few years back to form Hodgeman County. Salmans was a first team All 8M-II quarterback this season and has been a three-time all-league selection at quarterback.

The Hodgeman County Booster club would like to say congratulations to Jacob Salmans on being named the Sports in Kansas 8M-II Player of the Year. Hodgeman County is proud of you! Hook 'Em Longhorns!

8M-II Defensive Player of the Year

Emanuel is the strongest football player in the state and hails from the 8-man ranks. The 6-foot-5, 305-pound, senior, lineman, had 87 tackles this season along with three quarterback sacks to lead Hanover to back-to-back state titles in 8M-I. When we said he was strong, we meant it as he features a bench press of 455 pounds. Emanuel was named a first team 8M-I selection this year by every publication. Emanuel is a rising prospect in the state and has a preferred walk-on offer from Kansas State.