v Swinehart, Kuhn earn 2-1A Sports in Kansas POY Honors - Sports in Kansas 
Warning: include(../includes/bodytag.php): failed to open stream: No such file or directory in /home/kansass/public_html/ks/news/index.php on line 36 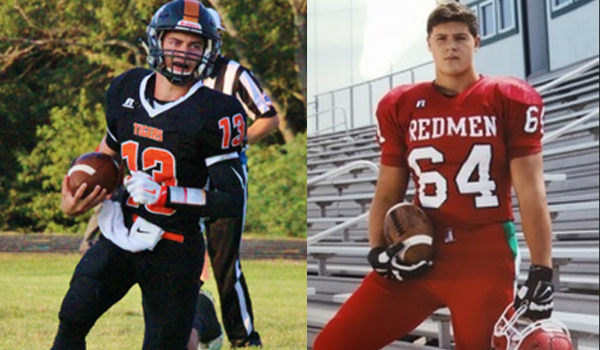 2-1A Offensive Player of the Year

Swinehart has been one of the top small school utility players over the last three seasons. Teams always keyed on him and he still found a way to produce. He had 4,056 rushing yards in his career, 2,019 receiving yards and passed for 445 yards. He had 6,628 all-purpose yards in his four-year career and three-year career as a starter. He also registered 267 tackles, seven fumble recoveries and 10 interceptions in his career. He also had 500 total return yards over his career, three returns that went for touchdown. In his career he scored 88 total touchdowns and 93 when you count touchdown passes. He scored a touchdown six in different ways in his career: rushing, passing, receiving, punt return, kick return and fumble return.  The senior has been a three-time 2-1A first team all-state pick. He is also a second team all 2A basketball pick from Sports in Kansas last March.

Lyndon State Bank would like to congratulate Dexton Swinehart on his 2-1A Player of the Year honor from Sports in Kansas. LSB is a supporter of Lyndon High School Athletics.

Wildcat Feeds wants to say congrats to the 2-1A offensive player of the year in the state of Kansas, Dexton Swinehart of Lyndon High School! Wildcat Feeds, Purple Power, It's in the Feed.

2-1A Defensive Player of the Year

Kuhn has size, is quick and is powerful to say the least. You should take a glance at his HUDL video just to see what exactly what we are talking about, that is if you like hard hits. The 6’2” 235-pound senior had 95 tackles this season, 20 of which went for loss, in limited time due to blowouts in many games. The Redmen defense was one of the most impressive units in the state as they won their first state title since 2008. Kuhn has an offer from Fort Hays State and a preferred walk-on offer from Kansas State, which is very elite as the Cats only offer about a hand full of those out in Kansas a year. Smith Center only allowed 35 points over their last 10 games of the season and outscored opponents 242-to-21 in four 2-1A playoff games. Kuhn also helped pave the way for nearly 340 rushing yards per game in 2017.

The Smith Center Redcaps are proud and honored to support Redmen football. Congrats to Dalton Kuhn on earning the 2-1A Player of the Year from Sports in Kansas.

LandMark congratulates Dalton Kuhn on being selected as 2-1A Defensive Player of the Year for the state of Kansas.

2-1A Offensive Player of the Year Finalists

2-1A Defensive Player of the Year Finalists