v Putz, Seidl honored as 4A-I Players of the Year - Sports in Kansas 
Warning: include(../includes/bodytag.php): failed to open stream: No such file or directory in /home/kansass/public_html/ks/news/index.php on line 36

Putz, Seidl honored as 4A-I Players of the Year 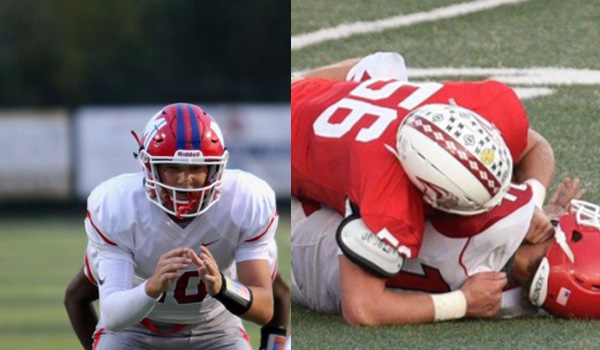 4A-I Offensive Player of the Year

What more is there to be said about a senior quarterback that led his team to three state titles as a starter as Miege won its fourth consecutive 4A-I state football title. Well a lot actually, because he rewrote the record books in Kansas this season. The 6-foot-0, 190-pound, senior, threw for 9,336 yards in his career (state record) to go along with 124 passing touchdowns (state record) at Miege. He threw just 13 interceptions in 720 passing attempts. He had 2,844 yards passing with 38 touchdowns as a senior with only five interceptions. He also added with his legs this season with 596 on the ground and another 11 rushing. We aren’t saying he’s the best football player of all-time in KS or a major football recruit, he’s a Notre Dame baseball signee, but it’s hard to argue that he may have had the most accomplished high school career out of any passing quarterback in Kansas high school football history.

4A-I Defensive Player of the Year

Seidl was one of the top two-way lineman in the state this season. He’s such a good player/teammate that he voluntarily moved to offensive line form the backfield to help his Bullpups squad become more of a contender. Seidl has 15 sacks on the defense and was named his league’s player of the year as an offensive lineman. He had 45 solo stops, 1 fumble recovery, 26 pressures and a blocked punt. He was perhaps the best pash rusher in the state this season along with Dalton Kuhn of Smith Center. The 6-foot-3, 225-pound, senior, defensive end, is also a baseball and basketball player for McPherson.

McPherson High School would like to congratulate Wyatt Seidl on the 4A-I DPOY from Sports in Kansas. Proud to support Bullpup Athletics.