v Mertz, Elliott pick up 6A player of the year honors - Sports in Kansas 
Warning: include(../includes/bodytag.php): failed to open stream: No such file or directory in /home/kansass/public_html/ks/news/index.php on line 36

Mertz, Elliott pick up 6A player of the year honors 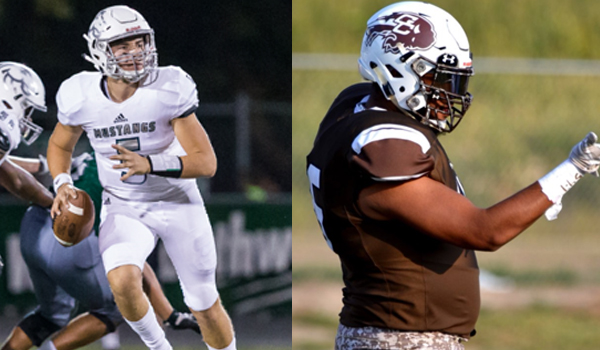 Sports in Kansas has released it's 6A player of the year honorees for the 2017 season.

6A Offensive Player of the Year

Mertz had one of the best years in the state passing for 3,684 yards with 45 touchdowns to just six interceptions on the season. His biggest accomplishment was leading the North Mustangs to their first ever state football title by doing that on a 90-plus yard drive at the end of the game to take the title over Derby on a 19-yard quarterback keeper. Mertz threw for 462 yards and four touchdowns in the title game. Over the playoffs he has 1,204 yards with 14 touchdowns to just one interception. Mertz, a Wisconsin commit who spent the last two seasons at Miege as a back-up, still has his senior year left.

BVN Gridiron Club would like to congratulate Graham Mertz on earning the 6A Player of the Year from Sports in Kansas. BVN Gridioron Club Supporting BVN Mustang Football.

6A Defensive Player of the Year

Elliott, a 6-foot-4, 285-pound, senior defensive lineman, is perhaps the best player in Kansas without an FBS offer left on the table as of now. He had a monster senior year that followed an outstanding junior season. He registered 81 tackles and 18.5 tackles for loss for the Buffalo defense in 2017. He also had an interception and blocked three field goals. Elliott is a three-sport athlete also playing basketball and track and field. He is the defending 6A state champion in the shot put. He has 5.0 forty-yard dash speed, squats over 500 pounds, benches over 300 pounds and has a 290-pound clean.

Congratulations to Garden City High School's DeMarcus Elliott on being named the 2017 6A Defensive Player of the Year from Sports in Kansas! The Sideliners BOoster Club is a proud supporter of Buffalo Football.

Congrats to the finalists for the award below

6A Offensive Player of the Year Finalists

6A Defensive Player of the Year Finalists