v Faces in KS: Carley Brack - Sports in Kansas 
Warning: include(../includes/bodytag.php): failed to open stream: No such file or directory in /home/kansass/public_html/ks/news/index.php on line 36 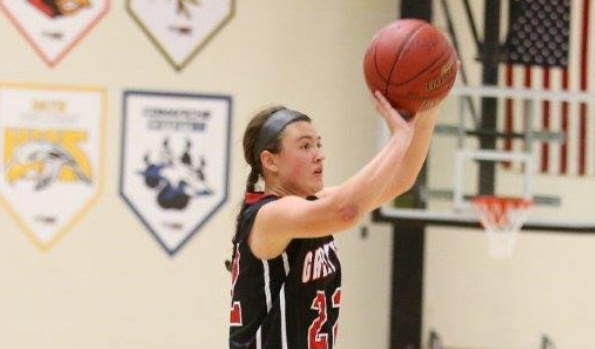 Injuries are a part of all sports and something that can slow you down. That it did for Great Bend senior Carley Brack who was a second team all-5A pick from Sports in Kansas last March as a junior. Just a few weeks after making our all-state team she played in a MAYB game where she tore her ACL. This meant no summer basketball, a key recruiting time for the 5'8" guard coming into her senior year.

"I was playing in the first spring MAYB game last season and drove in on a fast break and drew contact, lots of contact. I knew when I went down I tore my ACL, because i heard it pop." Brack said.

Fast forward seven months later, Brack enters her senior season coming back from a long recovery process and hopes to catch the eye of some college programs, something she didn't get to prove this past summer. She had surgery on April 19th of 2017 and immediately started physical therapy over the next several months. Brack was then released to officially play on November 20th of this year, just seven months and one day post surgergy.

"The process has been long. Looking back on it was the harest thing that I have had to overcome. It was very painful, but I am determined to come back stronger than ever. My motto through it all has been minor setback, major comeback." Brack said.

She will look to continue the success where she left off one season ago as Brack averaged 18 points per game for the Panthers, who finished 11-10. Brack, who can play either guard position, has been rated as high as the #105 overall guard and a three-star in the class of 2018 by ESPN. She will look to make the most of her senior season as she returns to the hardwood for the Panthers. We caught up with Brack below in the latest edition of Faces in Kansas as she talks about the recovery process and her goals this season.

I have always had a love for basketball and started playing on my elementary school team in 3rd grade.

How did you get injured and what did you injure?

I was playing in the first game of the Spring MAYB season in late March. I drove in on a fast break and drew contact...lots of contact. I knew when I went down that I had tore my ACL because I heard and felt it pop. My only claim to fame from this incident is that Taylor Robertson was the one that threw me the ball.

What has been the process of coming back like from injury? What all goes through the rehab of your injury?

The process has been long. I began physical therapy immediately following my injury. I had surgery on April 19th and continued the physical therapy. I had difficulty regaining full range of motion and by concentrating on this deficit, the rebuilding of my quad muscles also fell behind. My surgeon, Dr. McAtee, recommended a new type of therapy called Blood Flow Restriction Therapy. Although this type of therapy is not yet offered at most clinics, my physical therapist in Great Bend, Kevyn Soupiset, did some research and found the closest certified clinic in Abilene, Kansas. Chris Kersten at Abilene Physical Therapy and Sports Medicine has been using this therapy since June and helped me to regain my strength at a much faster rate. I traveled to Abilene twice a week for 8 weeks. It was just the boost that I needed because I was officially released to play on November 20th, 7 months and one day post surgery.

Looking back on it all I realize that it was the hardest thing that I have had to overcome. It was a very long and painful process but I am determined to come back stronger than ever. My motto through it all has been #minorsetbackmajorcomeback

I have a personal goal to reach 1,000 career points this season and make the All-State team. Our team will be young this season but we hope to have a successful season.

Coach Minton and I have been close since my freshman year and she is very encouraging and always pushing me to be the best I can be.

I am a shooting guard that makes most of my points by beating my defender off the bounce and getting to the free throw line. I also like to shoot behind the arc.

Due to an ACL injury in March, I missed playing the summer of my Junior year which is a key recruiting time. As of right now, I hope to have a successful Senior year and see where it takes me.

I’ve played against Kennedy Brown, Taylor Robertson and Chrisitiana Carr all Division 1 recruits. We will play both Derby and McPherson this season, so those games will be challenging. I have played with Taylor during the summer season and I prefer to be on the same side of the ball!

Before my knee injury I threw shot and discus, but missed my Junior season. I am unsure at this time if I will go out this year.

I actually live in the small town of Albert which is 12 miles west of Great Bend. There’s not much here other than a bank and a post office. I did however spend many summer nights at the community park shooting baskets and playing pickup games with some of the locals.

My favorite subject in school is Science. I plan to major in Athletic Training so I love learning about the human body.

In 10 years I hope to be out of Kansas with an Athletic Training job and a dog :)

Since there are no restaurants in Albert I’d have to say Grandma’s house. If I’m willing to drive a few miles then Crazy 8’s in the big city of Otis is where I’d reccomend.